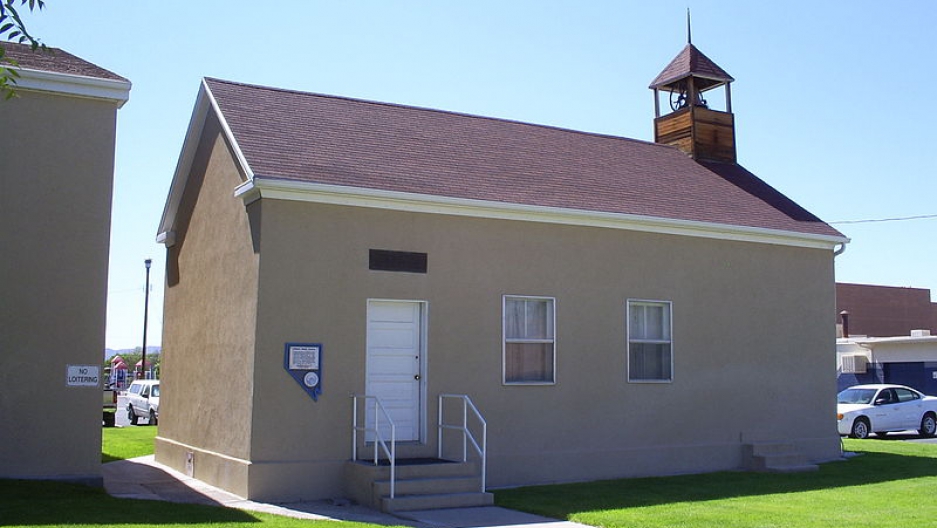 The Panaca Ward Chapel, located next to the newer LDS meetinghouse in Panaca, Nev. The sign above the door says "Uvada Stake Bishops' Storehouse of The Church of Jesus Christ of Latter-day Saints." The LDS Church and its members try to stor

Members of the Church of Jesus Christ of Latter Day Saints (or Mormons) are urged to keep at least a three month supply of food and water, cash and a 72 hour emergency kit.

If Mitt Romney were to become president, the first Mormon to do so, would his family set up a food storage facility at the White House? That’s one of the questions that came up recently when the New York Times ran a story about Mormon cuisine.

Kathleen Flake, associate professor of American religious history at Vanderbilt University and a Mormon herself, said she keeps an emergency backpack kit and said her food storage tends towards canned food and the freeze-dried “space age” kind.

“It’s freeing to know that when I get a signal of a tornado I can grab that backpack and head for the basement and I’ll have a source of light, I’ll have something to eat, I don’t have to worry,” Flake said.

The Times article looked at young Mormon chefs trying to break the stereotype of how Mormons cook.

“The basic dinner was meat in cream-of-something soup on mashed something,” Kate Jones, 31, a food blogger who grew up in Utah and now lives in Louisiana, said in the Times.

While the article focuses primarily on how the internationalization of the Mormon Church, with members across the world and more and more never having lived in Utah, most of the article's sources, the Times said, speculated on whether there would be a Romney family food storage facility at the White House. In a previous article, a college friend recalled that they had such a supply then.

"It serves two purposes, one very personal: for family disasters like loss of employment or extended illness that drain the family resources," Flake said. "The church has asked all its members to be able to support themselves for a particular period of time. That period sometimes shifts, so I can't give you the exact amount. I remember growing up thinking it was a year — but I don't think it's that long now.

"The other dimension is public disasters. Floods, tornadoes, things like that. The church has organized itself both so it can provide relief both to members and non-members in those more public circumstances," she said.

The Mormon church helps anyone in need in a disaster. After Hurricane Katrina, the church had emergency supplies on the ground in New Orleans within 24 hours.

"It's a combination of both having the resources and the delivery mechanism," Flake said, "It has both those capacities. The intelligence to track the disaster and the resources to respond at a very large level."

Flake said there's a religious tone to the Mormon directive to be prepared and stocked. They believe that the second coming of Jesus Christ is, if not imminent, comparatively close. And they view the events leading up to the second coming as being the sorts of events that could necessitate members having sufficient supplies on hand to survive months without access to normal provisions.

"The church tries to encourage its members individually and collectively to provide that government that will guide them through chaotic times," she said.