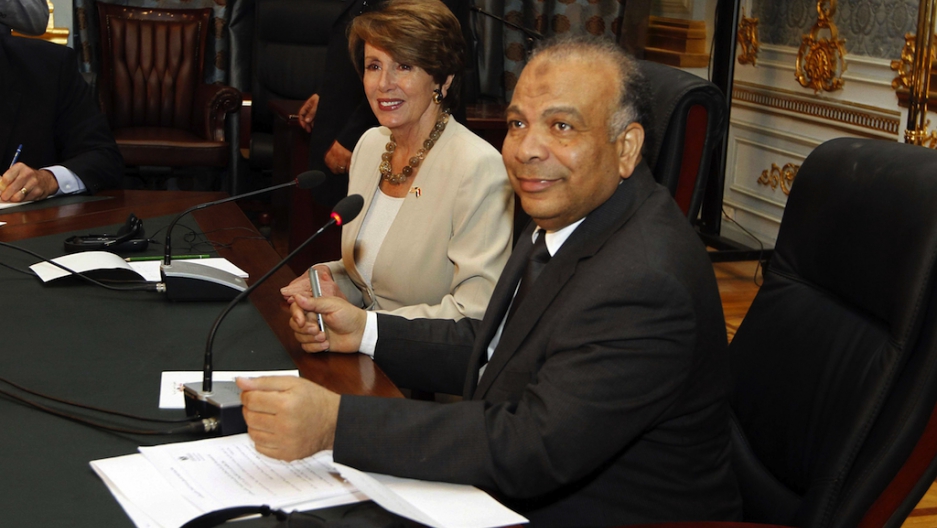 CAIRO, Egypt – House Minority leader, Nancy Pelosi, is here in Cairo today. Leading a delegation of six Democrat and Republican lawmakers, the former House speaker is on the first official visit to Egypt since US NGO workers charged with receiving illegal foreign funds fled the country two weeks ago.

At a press conference in the Egyptian capital, Cairo, Pelosi called the rift over the US-funded NGOs were a "bump in the road."

"We don't intend to have it stand in the way," she said, according to the Associated Press.

In the midst of the NGO debacle, which saw prominent US organizations like Freedom House and the National Democratic Institute (NDI), US lawmakers hinted they were ready to sever the $1.3 billion in aid to Egypt each year.

"The interest of Egypt and the surrounding area, as well as the United States, is well served by a strong and stable Egypt," she said, according to AFP.

The local Arabic-language news outlet, Youm7, reported that Al Katatney, a prominent leader of the Muslim Brotherhood's Freedom and Justice Party, told Pelosi to respect Egypt's sovereignty and refrain from interfering in its political affairs. But that information could not be independently verified nor was it reported anywhere else at the time of this post.

The Brotherhood and the FJP have waivered in their support for the crackdown on US-funded NGOs in Egypt, at times throwing their weight behind the "NGO law," a regulation forged by ousted President Hosni Mubarak that activists call draconian, but also taking care not to prematurely rankle relations with the US.

Read more from GlobalPost: For Egypt, little to celebrate after foreign NGO workers are freed

Local press reported this week that FJP parliamentarians are right now drafting their own law on civil society organizations, but it was unclear just how much it would differ from the current law that prohibits outside funding for political activities.

In February, a leading member of the Muslim Brotherhood, but who is not currently a member of parliament, told the GlobalPost FJP lawmakers would revamp the law so that civil society, both local and US-funded would be under less pressure:

“I believe they [the parliament] will stop the implementation of this law,” said Ahmed El-Nahhas, a member of the FJP’s Supreme Committee in Alexandria.

“Through setting new laws, the parliament will take this legislation out of the current government’s control. The government should monitor the [foreign] funds, but not through force.”