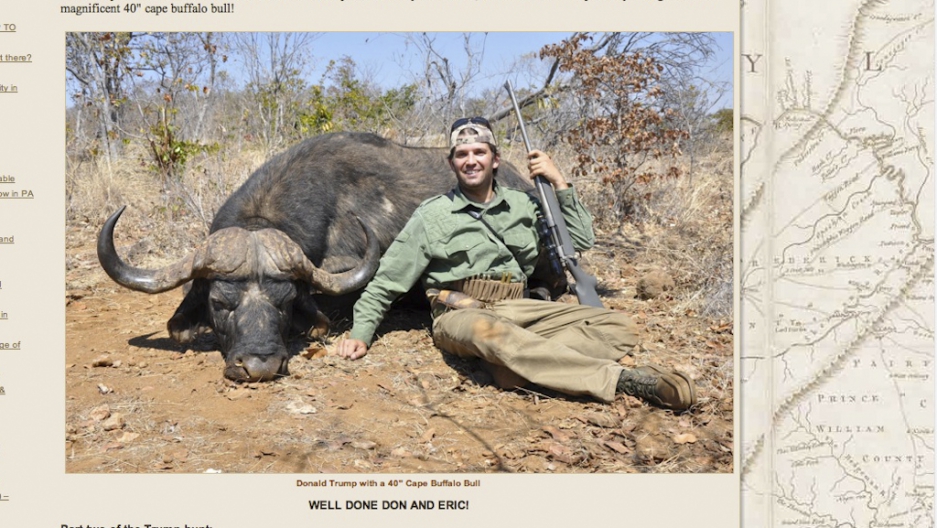 A screengrab of a 2011 post on the Hunting Legends International website shows Donald Trump Jr. posing with a Cape buffalo while on safari in Zimbabwe.
Share

JOHANNESBURG — Photos showing Donald Trump's two sons, Donald Jr. and Eric, with a menagerie of dead animals while on a "big five" hunting safari in Zimbabwe have sparked outrage among wildlife conservationists.

In one photo, Don Jr. holds a severed elephant tail, while in another, the two brothers pose next to a dead crocodile that has been strung up by its neck in a tree.

The photos were posted on the website for Hunting Legends, the company that ran their hunting trip to the Matetsi area near Zimbabwe's Victoria Falls.

"This was not the first time the Trump's hunted Africa [sic] and certainly not the last," the company said on its website, adding that "it was evident from the word go that these two amazing young men are everything but the 'city slickers' you would expect!"

More from GlobalPost: Hunters shoot and pay to save the rhino

Peta, the animal rights group, criticized the hunting safari in a statement to Hollywood Life.

"Like all animals, elephants, buffalo, and crocodiles deserve better than to be killed and hacked apart for two young millionaires' photo opportunity," Peta said.

"If the young Trumps are looking for a thrill, perhaps they should consider skydiving, bungee jumping, or even following in their anti-hunting father's footsteps and taking down competing businesses — not wild animals."

"I don't apologize to cater to public opinion when I did nothing wrong. To do so would be to sell myself out," he wrote.

His father, Donald Trump, told TMZ.com that while he is not a fan of hunting, his sons actions were "100 percent OK in terms of the hunting community."

"My sons love hunting. They're hunters and they've become good at it. I am not a believer in hunting and I'm surprised they like it," Trump said.