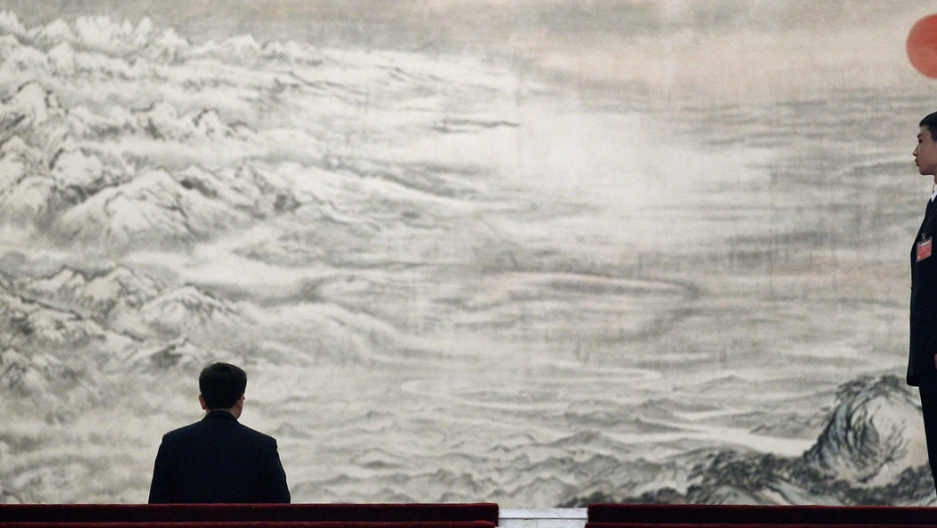 Security officers stand guard in front of a Chinese ink painting during the opening ceremony of the National People's Congress (NPC) at the Great Hall of the People on March 5, 2012 in Beijing.
Credit: Feng Li
Share

Editors note: Chinese politician Bo Xilai was sacked as the Communist Party leader of the Chongqing municipality a day after this story was published.

But there's a real political drama unfolding behind the scenes.

This fall, a once-a-decade transfer of power will take place. As that approaches, two visions of the future of the party's economic policy vie for dominance.

In one corner are the proponents of state capitalism, newly empowered after the global financial crisis. Their agenda has benefited from three years of massive stimulus spending, funneled to government-run companies.

In the other are pro-reform, pro-market advocates who believe the Chinese people are best served by a lighter hand from Beijing, on society as well as the economy. Typically, this view is personified by Wang Yang, the party boss in prosperous Guandong province.

Heading into the People's Congress, experts were expecting a showdown between the ideas represented by these two figures, who are competing for spots among China's true rulers, the nine-person Politboro standing committee.

So, whose vision gained the upper hand? Tea-leaf watchers say it's still a toss-up.

Bo Xilai’s stature took a blow when his deputy fled to the US Embassy last month, apparently seeking asylum. It’s unclear whether that will hurt his chances of reaching the party’s top rung.

It’s also uncertain whether the Chinese Communist Party is leaning toward Bo’s draconian approach to keeping social order, or a more liberal stance.

"It's hard to say," said David Zweig, chair professor at the Hong Kong University of Science and Technology. "Everybody knows that the system has problems. When you go into China these days, when something happens, they say, 'That’s a systemic problem.' … Nobody’s been willing to do much about it."

“Since the financial crisis, there has been a greater skepticism toward markets,” said Patrick Chovanec, professor of economics at Tsinghua University in Beijing.

“Even more than around the rest of the world, the Chinese will point to TARP" — the US government's massive financial intervention in the private sector — "and the bailout of GM and will say, 'We were right all along.' What’s happened globally has reaffirmed that stance.”

More from GlobalPost: Is China giving up on Syria?

At the same time, those within the government with ties to those companies have seen their fortunes balloon while average Chinese salaries have stagnated. The net worth of 70 members of the National People's Congress adds up to over $90 billion, according to the Hurun Report, a group that tracks wealth in China. The average income of an urban worker last year was $3,500.

It's no surprise, then, that a poll of 1.5 million online users by People's Daily prior to the NPC showed that inequality ranks as one of the top three issues for the Chinese public.

The NPC is well aware of the issue — especially after Chinese internet users mocked one NPC delegate for wearing a $2,000 pink Italian suit — but that does not mean it will be easy to address.

"As any political scientist can tell you, it’s easy to print money, but it’s much harder to redistribute," said Zweig. The inextricable ties of China's political elite with its fabulously rich state sector make it all the more complicated. One report from 2009 estimated that over 90 percent of the country’s wealthiest citizens were children of senior party officials.

Beyond financial factors, the caginess of China's presumptive president prevents any certainty about which way the party will turn at this crossroads. Xi Jinping, who visited the United States last month and is expected to be tapped as the next president at the transfer of power in October, has kept his ideological loyalties close to the vest.

"Nobody knows where the next leadership stands,"Chovanec said. "The only thing that could derail Xi Jinping coming to power is him making enemies, so he's very guarded."

One NPC delegate, Xiang Wenbo, asserted during the proceedings that “a market-oriented economy is not suitable for China,” saying that state-owned companies “continue to play a dominant role in industries related to natural resources, national security and people's livelihoods.”

Even from the top of the party, there came flashing signs that change is needed.

In an emotional final address to the congress after his 10 year tenure, Chinese Premier Wen Jiabao said on Wednesday that political reform was “urgent,” warning in a dire key that another Cultural Revolution could happen if the “new problems that have cropped up in China’s society” are not “fundamentally resolved.”

Economically, the signs are clear that too many of the benefits of China’s scorching growth have flowed to the politically connected. One measure of inequality called the Gini coefficient puts China’s gap between the rich and poor on par with Swaziland — surpassing levels associated with social strife.

A World Bank report that came out prior to the NPC underscored how dire the need is, saying China requires a “fundamental shift” in the country’s priorities, shutting off the spigot of cheap loans to state-run corporations.

So when will we actually see these and other needed reforms?

Don’t hold your breath, even if October does bring a liberal-minded freshman class to Beijing.

Because of the time it takes to secure their power in the government, professor Zweig says we won’t know where the Xi Jinping and the next generation of leaders truly stand “for at least three years.”