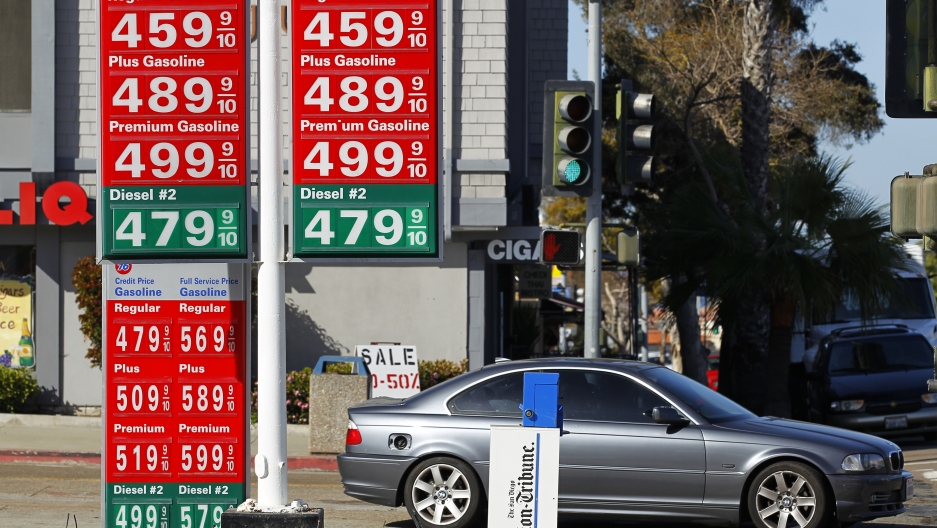 A commuter drives past a gas station sign displaying current prices for self serve and full serve gasoline in La Jolla, Calif., on March 8, 2012. (Photo by Mike Blake/Reuters.)

President Barack Obama's approval rating has slipped in the past month from 50 percent to 41 percent, according to a New York Times/CBS News poll released on Monday.

Many believe rising gas prices are to blame for his poor performance. The national average price for a gallon of regular gasoline is now $3.81 and climbing.

Todd Zwillich, The Takeaway's Washington correspondent, said everyone is pointing fingers at everyone else, trying to pin the blame for the high gas prices on anyone but themselves. With Congress already "enjoying" some of the lowest approval ratings in its history, it's virtually impossible that they can see support further erode. But Obama, who recently had regained support as signs of economic recover persisted, had some room to fall.

Zwillich said Obama was correct when he said this has been a problem for 30 years — one that's never really been addressed by leaders from either party.

"Not to sound too cynical but, these issues, while sounding pretty good, we have gone through these pretty much every year," Zwillich said. "Take drilling in ANWR for example...it's getting thrown around right now as a solution."

That's been discussed in 2001, 2004, 2006 and 2008, even becoming the topic of jokes in the 2008 presidential campaign. Republicans have made a major campaign platform out of the quest to drill more.

But it's not like Democrats are proposing new solutions either. Their ideas, like opening the Strategic Petroleum Reserve, or taxing big oil companies, are the same ideas they've used or suggested for years as well, Zwillich said.

They're also blaming fuel speculators — something they did in 2008 as well.

"It's OK to have a debate over long-term energy policy," Zwillich said, "indeed, it's a good thing. But this election-year fighting, because you're angry over prices at the pump, is this the best way to do it? It's a fair question because" we've haven't really gotten anywhere.

And, unfortunately, Zwillich said, none of the proposals from Democrats or Republicans will do much to lower the price at the pump.

"It's probably a lot more about their political mileage than your gas mileage," he said.