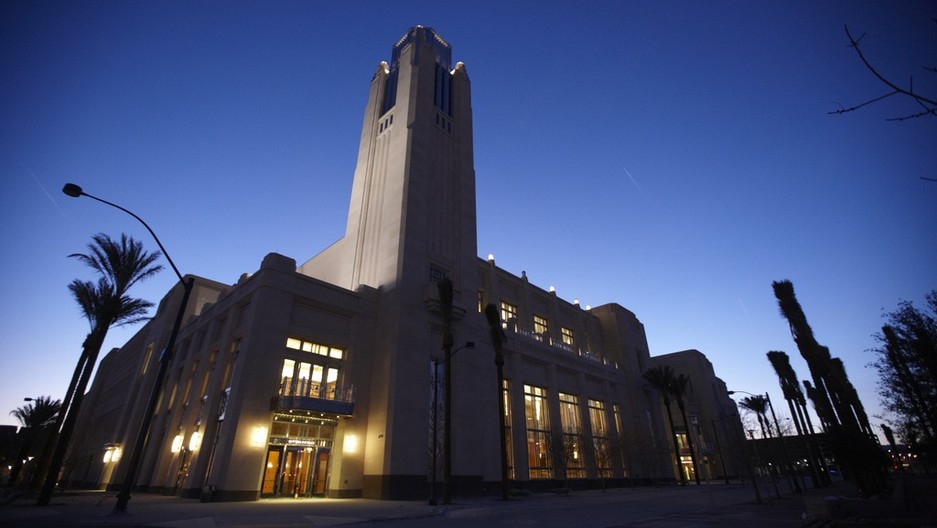 This past weekend The Smith Center for the Performing Arts opened in downtown Las Vegas. Supporters hope the new $470 million cathedral to the arts shows the rest of the country that Vegas is a serious cultural destination that can host pop goddess Celine Dion and violin virtuoso Joshua Bell.

"Tonight we celebrated more than the opening of The Smith Center," said president and CEO Myron Martin. "We celebrated this community's commitment to the arts and to creating something important and lasting for the people who live here and for generations to come."

Yet if recent history is any indication, the city has its work cut out for it. This isn't Vegas' first attempt to present high art alongside the Strip's glitzier entertainment. There's the Bellagio Gallery of Fine Art, which is currently showing work by Claude Monet. But in 2008, the Guggenheim Hermitage Museum at The Venetian went belly up after only seven years and its sister museum, the Guggenheim Las Vegas, shuttered a year later due to poor attendance. Las Vegas may be known for its high rollers, but arts funding has been a chronic problem as well. In 2009, the Nevada Ballet Theater let go of nine dancers and the Las Vegas Art Museum (LVAM) closed altogether. The LVAM's executive director Libby Lumpkin was pessimistic about the city's appetite for high art. "Vegas will always be a cowboy town with a lot of libertarians," she told Las Vegas Weekly.

And then there's Vegas' reputation for crass casino culture. For the past decade, the city has celebrated this idea with the tourism slogan, "What happens here, stays here." Vegas is either the drug-induced hallucinatory fun house of Hunter S. Thompson, or the kind of place where Mike Tyson's pet tiger might surprise you in your hotel bathroom (as in The Hangover).

Enter The Smith Center. The new performing arts compound promotes itself as a "cultural complex that will enable Southern Nevada to take its place on the international stage." Its organizers have lined up performances by artists ranging from Yo-Yo Ma to David Sedaris, and they've taken in the wounded Nevada Ballet and the Las Vegas Philharmonic.

Lumpkin tells us that unlike her defunct LVAM, The Smith Center has a more viable long term plan. "It's too big to fail," she says pointing to the city's dogged support for the project even as the city suffered greatly during the recession. While Lumpkin always struggled with fundraising, The Smith Center quickly raised a total of $320 million from the public and private sectors. For locals, the gleaming new complex is seen as a kind of litmus test to prove that they've arrived. Smith Center chairman Don Snyder went so far as to call it the "most important project to be built in Nevada in our lifetime."

But Vegas is still a gambling town and the folks who run The Smith Center seem to be hedging their bets. The grand opening concert this past weekend featured trumpeter Arturo Sandoval and dancers from the American Ballet Theatre. But it also included crowd-pleasers such as Jennifer Hudson, Willie Nelson, and Carole King. The Smith Center may be able to bring high art to Vegas. The question is, will it stay there?

Slideshow: Inside The Smith Center of the Performing Arts