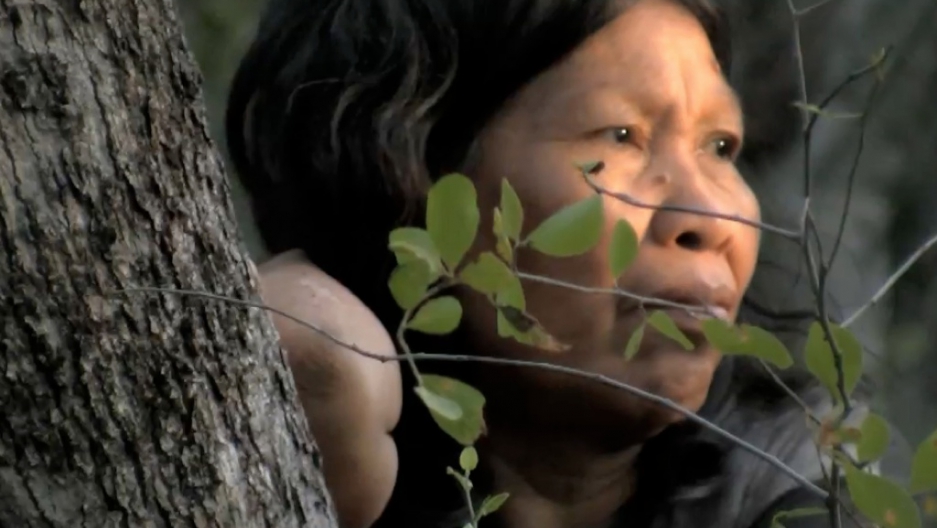 Some Paraguayan indigenous people would prefer to remain in isolation to keep their way of life.
Credit: Survival International
Share

LIMA, Peru — Paraguayan officials confirmed earlier this month that a previously unknown tribe is living in a section of the country's vast Chaco forest.

The group, dubbed the “hiding tribe" by Paraguayan authorities, is thought to belong to the Ayoreo Totobiegosode culture, many of whose members have been driven out of the forests by logging and cattle-ranching.

“We have been able to verify certain signs that reveal a human presence in this place and that would be the Ayoreo, who are in a situation of voluntary isolation,” INDI President Oscar Ayala Amarilla told Paraguayan newspaper Ultima Hora.

According to a report by INDI, the discovery came after two Brazilian ranching companies — known as River Plate and BBC — acquired large tracts of land on the vast Gran Chaco plain. Authorities had previously warned that the companies' operations could disturb isolated tribes still living in the area.

INDI's report has not yet been made public but was obtained by Survival, a nonprofit that campaigns for the rights of isolated peoples, and shared with GlobalPost.

Since beginning operations, the two Brazilian companies have cleared thousands of acres of forest to make way for cattle. Last year, they were charged with illegal deforestation. Neither responded to GlobalPost’s requests for comment.

Outside of Papua New Guinea, South America has the largest concentration of indigenous tribes still living a traditional lifestyle in isolation from the modern world. Worldwide, however, their numbers are rapidly declining.

Most are in remote stretches of the Amazon. But some still remain in the Chaco, a huge plain of tropical dry forest that runs between Argentina, Bolivia and Paraguay, and where the Ayoreo have lived for thousands of years.

But in recent years, ranching — by Paraguayan and Brazilian companies as well as Paraguay’s large Mennonite community — has squeezed the Ayoreoout of the area.

Due to their lack of previous exposure, most isolated indigenous groups, including the Ayoreo, have little or no immunity to a range of common infections, from colds to measles, which can quickly wipe out entire tribes after first contact with outsiders.

In addition to epidemics, first contact with indigenous groups also frequently results in violence, as terrified natives respond aggressively to what are, for them, unprecedented intrusions in their world by strange interlopers.

Under the United Nations’ binding ILO Treaty 169 on Indigenous and Tribal Peoples, which Paraguay has signed and ratified, it is illegal to make first contact with such groups, unless the tribe initiates the process.

As such, indigenous rights groups such as Survival and Paraguay’s People, Environment and Territory (GAT by its Spanish initials) argue that land used by native groups should be off-limits to extractive activities, including logging, mining, damming, agriculture and livestock-rearing.

The INDI report describes how an Ayoreo tracker working with the agency’s researchers spotted the signs of the never-before contacted group. It also cites the tracker’s pleas for the group to be protected.

“‘The Indians living in the area are forced to flee to other areas to avoid being discovered … to ignore the knowledge possessed by the original owners of the Chaco forest [the Ayoreo tracker] would be a foolish mistake,” it warns.

“In line with these antecedents and the evidence mentioned above, all kinds of protection needed by the residents of this place should, on a precautionary basis, be taken into consideration.”

It remains unclear what action the Paraguayan authorities will now take. But Survival and GAT are both calling for River Plate’s activities at the ranch to be halted and for a police investigation into how it acquired the land in question.

“However, actions speak louder than words. The government must now clamp down on illegal deforestation and guarantee the Ayoreo rights to land, which they have claimed for over 20 years. It’s imperative if the survival of their uncontacted relatives is to be safeguarded.”