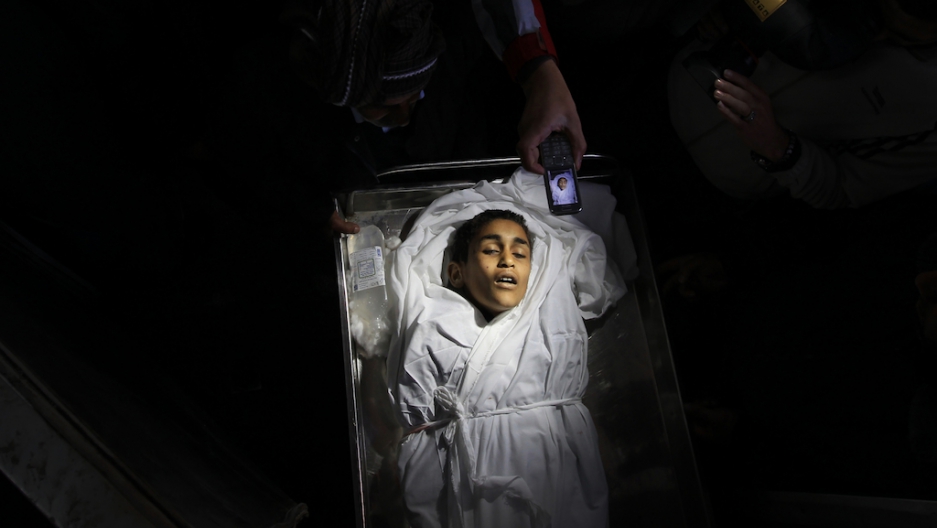 The body of Palestinian boy Ayoub Asaly, killed in the recent round of violence in the Gaza Strip.
Credit: MAHMUD HAMS
Share

A truce has been called between Israel and armed Palestinian factions to halt several days of violence in the Gaza Strip. Israel's air assaults on Gaza over the weekend left 25 Palestinians dead, many of them fighters but some of whom were civilians. Palestinian groups fired over 100 rockets, most of them homemade, into Israel.

But who's to blame? (That's always a fun question to ask when discussing the Israeli-Palestinian conflict).

A few key points should be made about this most recent round of bloodshed, at the same time rooted in both familiar patterns and recent developments, in order to contextualize the events and what will for sure be a next battle.

The fresh clashes were sparked by an Israeli assassination of a known Palestinian militant by firing a missile at his car from a pilotless drone over Gaza City on Mar. 9, 2012, part a years-old Israeli policy of carrying out so-called 'extrajudicial killings' (without due process) in the Gaza Strip.

Zuhair Al Qaissi was a senior commander of the armed wing of the Popular Resistance Committees (PRC), the Nasser Salah Al Din Brigades, and that led the cross-border operation that led to the capture of now-released Israeli soldier, Gilad Schalit, in 2006.

Israel said Al Qaissi had been responsible for planning a brazen Aug. 2011 attack by militants inside Israel and that left 8 Israelis dead – and that he was plotting another like it.

Only serious doubt had since been cast on Israel's previous claim the PRC was behind the the August attack, even by Israeli officials themselves who backtracked on charges of the group's involvement despite having launched a series of air-strikes that left 30 Gazans dead that same month.

During my own time in the Gaza Strip in 2009, I spent a day with a small unit of the Nasser Salah Al Din Brigades in central Gaza to get an idea of their capabilities. They seemed paltry at best. And although the group was revered in Gaza for having snatched Schalit, Hamas (who controls Gaza) prohibited some of the other smaller armed groups from obtaining more sophisticated weapons and operating withou the movement's consent.

Over the weekend, Hamas refrained entirely from firing rockets at Israel, something it has largely adhered to since a punishing assault on Gaza in 2008-2009 left many Hamas institutions in ruins.

But the movement undoubtedly maintains a tight grip on the territory – and while since the war it has moved to appear like a responsible, pragmatic and non-violent government, it can still clampdown on any guerrilla operations and seems more than happy to allow the splinter factions and other armed groups fire rockets at Israel in the interim.

According to news reports, it was Islamic Jihad, yet another Gaza-based armed faction, that negotiated the truce with Israel through Egypt.