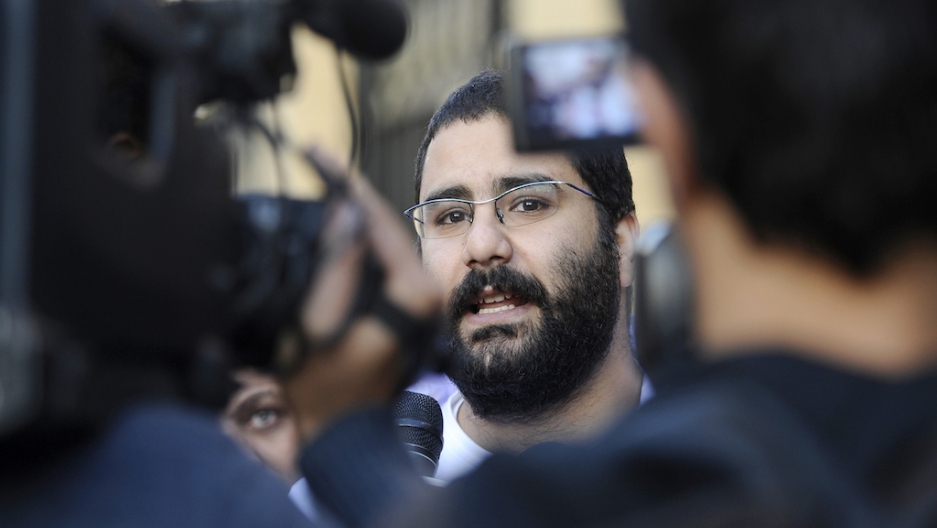 Egyptian blogger and activist Alaa Abdel Fattah speaks to the press following his release from the police headquarters in Cairo in December. In a new report, Reporters Without Borders says Egypt is on its way to becoming an "enemy of the internet."
Credit: FILIPPO MONTEFORTE
Share

Not exactly an enemy, but "under surveillance" – or on the brink of achieving enemy status – according to a new report on internet freedom by Reporters Without Borders (RSF - Reporters sans frontières).

The Paris-based press freedom watchdog released the report yesterday to coincide with World Day Against Cyber Censorship, and names Middle East countries Bahrain and Syria as "enemies of the internet," or nations taking decisive steps to stifle web freedom.

(Syria is in the midst of violently quelling an armed uprising and Bahrain, facing continued unrest following a popular revolt last year, is a key all of the US in the Gulf).

Read more from GlobalPost: Is your country an enemy of the internet?

Egypt, under the stewardship of a conclave of military generals, is alarming the organization with its continued arrest and detention of activist-bloggers charged with insulting the armed forces:

"Untouchable in Egypt, the army still practices the same censorship and intimidation," the report says. The Supreme Council of Armed Forces (SCAF), which seized power during Egypt's uprising, has not only adhered to Egyptian President Hosni Mubarak's censorship tactics but strengthened them, RSF says.

Several high-profile bloggers have been tried by military courts or held incommunicado since last year.

Both local and foreign journalists also face harassment from police forces, the army and locals while operating in Egypt, often accused of wanting to "paint a bad picture of Egypt" or "incite violence."

With an already rocky – and sometimes violent – transition to miilitary rule, Egypt had better chill out on the web-based repression – or risk becoming the world's next "enemy of the internet."