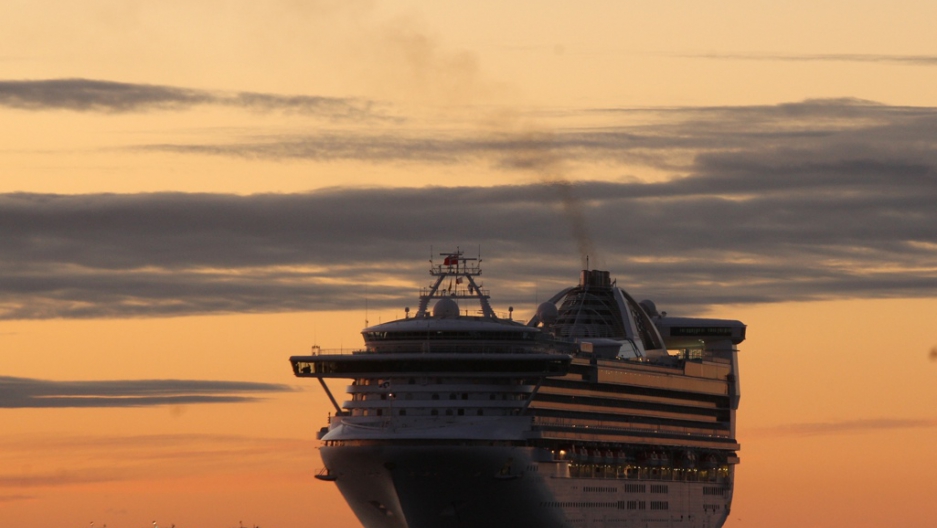 One of the two British cruises denied entry to an Argentine port, one of the recent moves in a centuries-old spat over the Falkland Islands.
Credit: JOEL ESTAY
Share

LONDON, United Kingdom — History repeats itself: Britain and Argentina are at each others throats over the Falkland Islands, once again.

Thirty years ago next month, the two countries fought over the remote chain, inhabited by just a few thousand people and an abundance of sheep, 300 miles off Argentina's coast.

Back then, Argentina was ruled by a dictator. Margaret Thatcher was in 10 Downing Street. Great Britain’s economy was in the doldrums, and the UK jumped at the chance to defend vestiges of a bygone colonial empire.

The 74-day war claimed 649 Argentine and 255 British lives, and shocked the world that two nations, on the same side of the Cold War standoff, couldn’t settle their differences in a more grown up manner.

In recent weeks, Argentina — which calls the islands Las Malvinas and still claims them — called for a national boycott of UK goods, and turned away British cruise ships visiting the islands.

When the UK announced it would deploy the warship HMS Dauntless in the area later this month, Argentina’s President Cristina Fernandez said, “they’re militarizing the South Atlantic once again.”

Prime Minister David Cameron insists that Britain will not bend on its sovereignty over the islands, considered a self-governing British Overseas Territory. Visiting the United States this week, he is expected to seek his Washington allies’ backing.

“Cameron will be hoping that Obama says something he can construe domestically as America’s support for the British position [on the Falklands],” said Nick Kitchen, an international relations fellow at the London School of Economics.

But Las Malvinas are still a sensitive subject for the South American country.

Argentina staked a claim with the United Nations in 2009 on Las Malvinas and its underwater oil basin. The UK followed suit. Both were denied.

Secretary General Ban Ki-moon recently has urged the countries to stop “escalating” the conflict, according to the Telegraph.

Argentina’s fight lately has become something of a cause celebre, with US actor Sean Penn and UK musicians Roger Waters and Morrissey voicing support for Argentina’s claims to Las Malvinas.

Yet while the spat is ostensibly over sovereignty, the countries are also eyeing huge potential royalties from oil.

In the spring of 2010, it struck oil off the Falklands' northern coast.

Rockhopper plans to spend $2 billion to bring the northern basin Sea Lion field on-stream by 2016. It estimates the field could produce 120,000 barrels of oil a day by 2018.

Drilling began off the Falklands' southern coast in January, with deepwater prospects there expected to be as much as 10 times larger than the Sea Lion.

Investors are hopeful for a giant discovery — some say even 8.3 billion barrels — that would rival the UK’s discoveries in the North Sea fields in the late 1960s and 1970s.

If prospectors find as much as they expect, the Falkland Islands would accrue many billions of dollars in revenue.

An exploration there by Shell Oil in 1998 was abandoned. With oil trading then for $20 a barrel, it could not justify the hefty expense needed to bring whatever riches it found to market.

Even the rosiest predictions give only a 25 percent chance of recovery.

Yet, a glance at share prices for companies with a stake in the Falklands suggests investors are unfazed by the challenges or harsh words.

The price of shares in the two companies with wells there — British companies Borders and Southern Petroleum, and Falkland Oil and Gas Limited — have risen since the $1 million-per-day Leiv Eiriksson rig began drilling the first well at the end of January.

Laura Loppacher, a London-based oil and gas analyst for Jefferies International, has a buy rating on firms’ shares but says the companies have only a 5 percent chance of success.

“At this point I’m far more concerned about not actually finding anything than the dispute between Argentina and the United Kingdom,” she says.