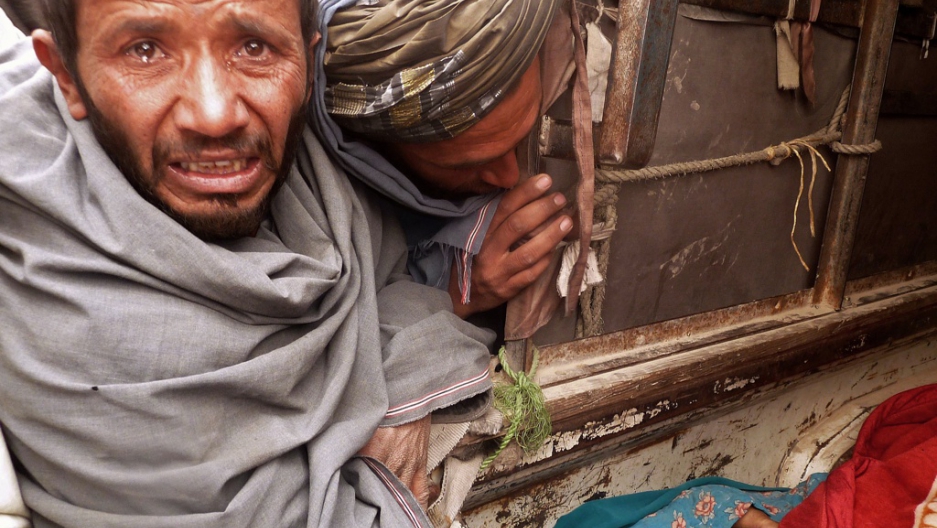 A mourner cries over the bodies of Afghan civilians, allegedly shot by a rogue US soldier, seen loaded into the back of a truck in Alkozai village of Panjwayi district, Kandahar province on March 11, 2012.
Credit: Jangir
Share

CAMBRIDGE, Massachusetts — On the heels of the notorious Taliban body desecration and Quran-burning incidents, the deliberate and calculated massacre of 16 innocent Afghan men, women and children by an American soldier have now pushed US-Afghan relations to a breaking point. Afghan President Hamid Karzai called the slaughter “murder and terror and an unforgivable action,” while American officials once again scrambled to express regret.

As villagers from the Panjwai district weep over the bodies of their nine slain children, words can no longer provide any comfort here. There is simply nothing you can say to a man after his entire family is butchered in his home. For Afghans, to kill a man’s family is to destroy his humanity, gentleness and life’s purpose. I remember a mujahideen fighter from the Soviet era, whose face was literally scarred from his tears. He spoke of how his entire family had been murdered by a Soviet air raid. He was alone. I knew then that he had nothing left to live for and that he would fight until the end.

Words are useless in such cases.

In the wake of this new layer of grief, there is now much talk about expediting the withdrawal of US-led forces and offering more limited assistance to the Afghan government in the post-transition period. Let’s be frank about what this actually means. After withdrawal, the international community will want the Afghan government that it has spent $500 billion constructing and defending to at least appear as though it is legitimate and functioning. Though anti-corruption efforts have been the subject of discussion, there is no plan for effectively tackling the magnitude of the corruption problem in Afghanistan in the foreseeable future.

Therefore, the goal is to prop up an inept and paralyzed government that is beholden to local strongmen and criminals so that it can prevent a full-scale military and political take-over by the Taliban. It aims to maintain the political status quo by co-opting parts of the Islamic group into a reconciliation process while actively suppressing others through violence.

The great folly of this long-term plan is that propping up such a corrupt regime will necessarily generate insurgency. No Afghan will stay at home while local strongmen engage in rape, murder and extortion. Therefore, the international community’s plan is to support a weak central government that is corrupt enough to incite rebellion against it, but strong enough to at least partially suppress that rebellion. In other words, the international community is on course to maintain a low-intensity civil war in Afghanistan, ad infinitum.

Afghans across the political spectrum are sick of apologies. There is a unity in this opposition: the villagers, the government and the Taliban alike have deemed the recent acts unconscionable and unpardonable. As Afghans reel from this most recent wave of atrocities, their sadness and despair reflect a deeper and more systematic violence against their civilization, culture, and religion over the past 30 years.