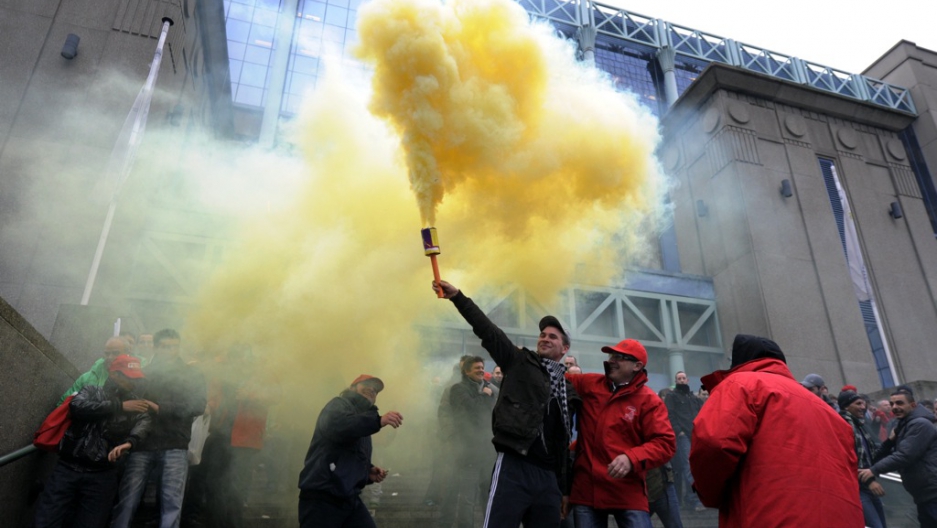 A man holds a smoke flare during a demonstration called by Belgian unions against the new government's austerity measures, in Brussels on December 2, 2011. Euro zone leaders are discussing the possibility of resuscitating a new Bolkestein directive to remove trade barriers in Europe's services sector. Dutch politician Frits Bolkestein devised the plan in 2006 but met heavy opposition.
Credit: ERIC LALMAND
Share

BRUSSELS, Belgium — Bolkestein. The very name strikes fear into the hearts of Europe's protectionists. They thought they'd vanquished the creature in 2006.

Back then, Dutch politician Frits Bolkestein devised a plan to eradicate trade barriers in Europe's services sector, a 12 trillion euro per year market. But street protests, government opposition and a revolt in the European Parliament ripped key parts from it.

Now Bolkestein's creation is threatening to come back from the dead, and the villagers are rushing for their pitchforks. So are some politicians.

“As far as I'm concerned some things are just not possible: I'm thinking of any new Bolkestein directive,” declared French President Nicolas Sarkozy at the latest European summit. “We don't want to see that again.”

That puts Sarkozy at loggerheads with British Prime Minister David Cameron who is leading efforts to resuscitate Bolkestein's vision.

Cameron believes allowing service companies to act freely among the EU's market of over 500 million people could be key to pulling Europe's economy out of its comatose post-Greece condition. The service sector accounts for 70 percent of the EU economy.

Cameron got the leaders of Italy, the Netherlands, Sweden, Estonia, Latvia, Finland, Ireland, Slovakia, the Czech Republic, Spain, Sweden and Poland to sign a letter with him ahead of last week's summit urging liberalization.

“Action should start in the services sector,” the 12 leaders demanded. “There is much that needs to be done to open up services markets on the scale that is needed. We must act with urgency, nationally and at the European level, to remove the restrictions that hinder access and competition.”

Their appeal succeeded in opening up a rift, with the EU's two biggest economies France and Germany pointedly refusing to sign up.

German officials said Chancellor Angela Merkel could have gone along with most of the “letter of the 12,” but she didn't want to put Sarkozy in a spot ahead of April's presidential election in France. Sarkozy himself said 85 percent of the letter's pro-growth ideas were acceptable – things like improving young people's skills, or investment in digital infrastructure and the green economy.

The remaining 15 percent on opening up the service sector was however a typical British “liberal and deregulatory temptation which I just don't recognize,” the French leader said.

Sarkozy's opposition is rooted in the wave of public unrest which Bolkestein's original proposal unleashed in much of Europe, but particularly in France.

The plan would have allowed realtors, hairdressers, advertising agencies, architects, construction firms and operators in a vast range of other areas to do business anywhere in the EU as if they were at home, applying the rules and standards of their country of origin.

Labor unions and small business associations in the EU's richer nations were outraged, fearing they were about to be swamped by cheaper, sub-standard rivals. In France, the debate crystallized in the figure of the Polish plumber, vilified as threat to cherished French labor protection regulations.

After 100,000 people protested in Brussels shouting “No to Bolkestein,” the proposal was watered down by governments and lawmakers. They added a raft of amendments that enabled governments to maintain many of their regulatory defences around key sectors.

The estimate from EU head office that Bolkestein's directive could have generated 2.5 million new jobs and 1.8 percent increase in economic output was largely forgotten. These days however, with unemployment at record levels and the economy mired in recession, such numbers are starting to draw fresh attention.

The man who now holds the now-retired Bolkestein's old job as EU internal market commissioner is Michel Barnier, a former minister in the French government under Sarkozy.

In a recent letter to pro-market governments, he recognized that “services remain constrained within the narrow limits of national borders, at the direct expense of innovation, quality and affordability.” However Barnier is wary of any attempt at attempting a “Bolkestein II” fearing a another backlash.

Instead the European Commission is looking to fill loop holes in the existing legislation and ensure that governments are fully implementing the current rules. The EU head office is due to present recommendations before the fall on how to improve the working of the directive.

Recent weeks have seen “No to Bolkestein” demonstrations by street traders and beach chair concession holders complaining against Italy's tardy implementation of the EU rules in their sectors. Expect vested interest protests to widen if the EU starts to revive more Bolkestein-type laws.