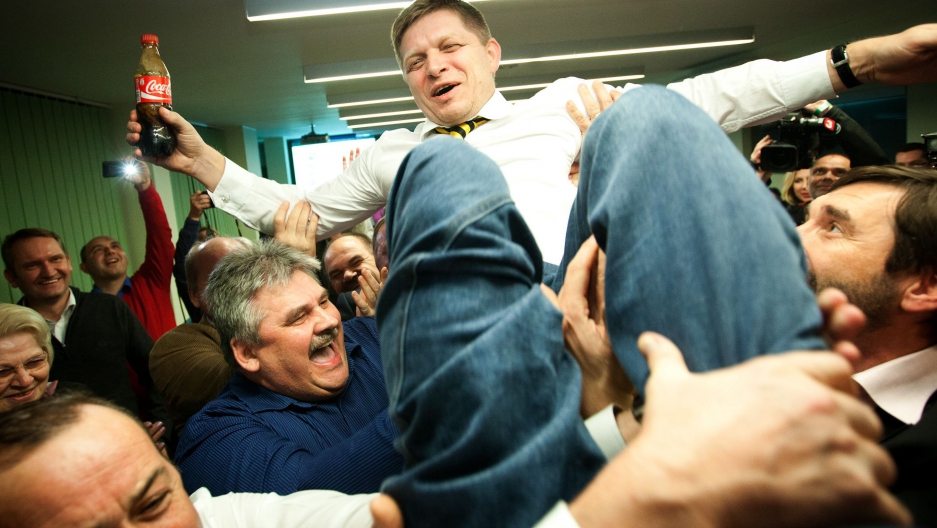 The social democrat opposition of former Prime Minister Robert Fico has secured a sweeping mandate to return to power in Slovakia following less than two years in opposition, after winning the country’s general election outright on Saturday.

Results released Sunday showed that Fico’s party, Smer-Social Democracy, received 44.4 percent of the vote, which translates into 83 seats in the 150-seat parliament. It is the first time since Slovakia gained independence in 1993 that a political party has won enough seats to govern without a coalition partner, The New York Times reports.

President Ivan Gasparovic said after the announcement that he would ask Fico’s party to form a new government.

More from GlobalPost: Slovakia votes in early elections with left tipped to win

On Sunday, Fico pledged to get Slovakia’s deficit down to the EU-mandated target of below 3 percent of gross domestic product for next year, partly through raising taxes for the rich and pushing the corporate tax rate on the country’s most profitable companies up to 22 percent, according to The Wall Street Journal.

He also promised to support EU efforts to protect the euro currency, adopted by Slovakia in 2009, and recover from the debt crisis that has swept across the continent.

“We can realize a program of a social state, a program of improving the public finances that won’t be at the cost of people with low and middle incomes,” Fico told supporters.

“It’s also a pro-European program,” he added, according to The Irish Times. “The European Union can lean on Smer because we realize that Slovakia, as a small country living in Europe… desires to maintain the euro zone and the euro as a strong European currency.”

Slovakia’s economy has contracted sharply in recent years, from a record high of 10.5 percent in 2007 to 3.3 percent last year and a predicted 1.2 percent this year, due mainly to falling demand in EU markets for Slovak products.

More from GlobalPost: 'Chuck Norris' bridge soon to be a reality?

A major corruption scandal subsequently erupted after a file, known as “Gorilla”, appeared on the Internet in December suggesting that Penta, a financial group, had bribed most of the parties in the 1998-2006 center-right government of then-leader Mikulas Dzurinda.

About 300 anti-corruption protesters clashed with police in the capital, Bratislava, on Friday, calling on Slovaks not to vote for any of the established political parties.