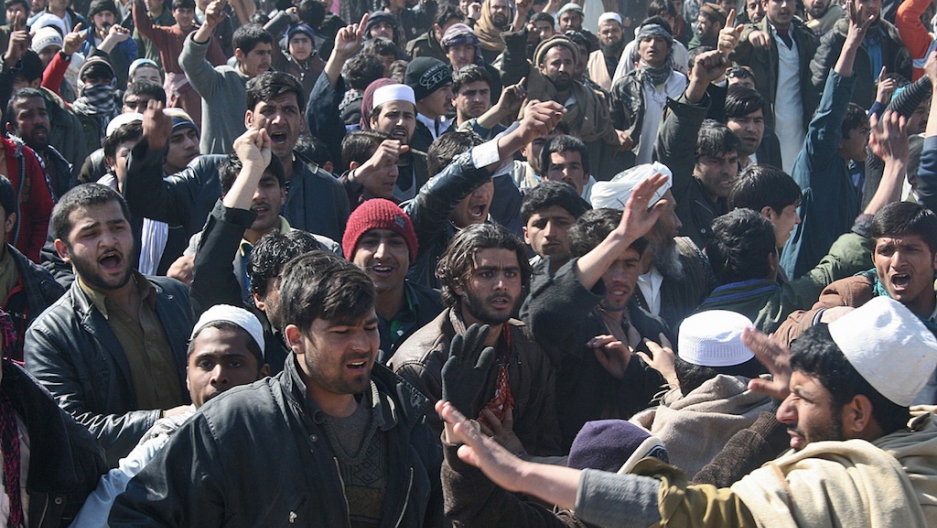 Afghan demonstrators shout anti US-slogans during a protest against Koran desecration in Kunduz on February 25, 2012. Rock-throwing protesters attacked a UN compound and clashed with police in northern Afghanistan February 25, as a fifth day of protests over the burning of Korans left at least three dead. Thousands attacked the complex in Kunduz but did not get in as violence flared across the city, in unrest that raised to 27 the death toll from protests at Koran burning by troops from the US-led NATO force, according to an AFP tally.
Credit: Gulrahim
Share

A US service member left his base in southern Afghanistan on Sunday and started shooting Afghan civilians, killing 16, including three woman and nine children, CBS reported, quoting Afghan officials.

US officials have identified the shooter as an Army staff sergeant from Fort Lewis, Washington, according to the Associated Press. He was assigned to support a special operations unit in either the Green Berets or Navy SEALS, focusing on village stability.

"This is an assassination, an intentional killing of innocent civilians and cannot be forgiven," Afghan President Hamid Karzai said in a statement.

NATO's International Security Assistance Force said the soldier acted alone and turned himself in to his commanders after opening fire on civilians, CNN reported.

President Barack Obama was "deeply saddened" by the latest news and called Karzai to offer his condolences to the Afghan people.

In a statement, Obama said, "I offer my condolences to the families and loved ones of those who lost their lives and to the people of Afghanistan, who have endured too much violence and suffering. This incident is tragic and shocking and does not represent the exceptional character of our military," according to Politico.

The killings come at a tense time for US troops in Afghanistan and follow a recent incident where several US soldiers were found to have burned copies of the Quran. This led to violent anti-American protests around the country which left around 30 Afghans dead. Later, six US service members were shot by Afghan soldiers, further heightening tensions.

A NATO spokesman told the AP it was unclear whether the shooter knew the victims. Witnesses said the shooter entered three homes while firing, and set fire to some of the bodies.

The shooting spree occurred in Panjwai district of Kandahar province. An area resident told The New York Times the shooting happened Saturday at the home of an area tribal elder.

The Taliban, meantime, has vowed revenge against the US for the attack in a statement on its website.

More from GlobalPost: Chinese cars made in Bulgaria