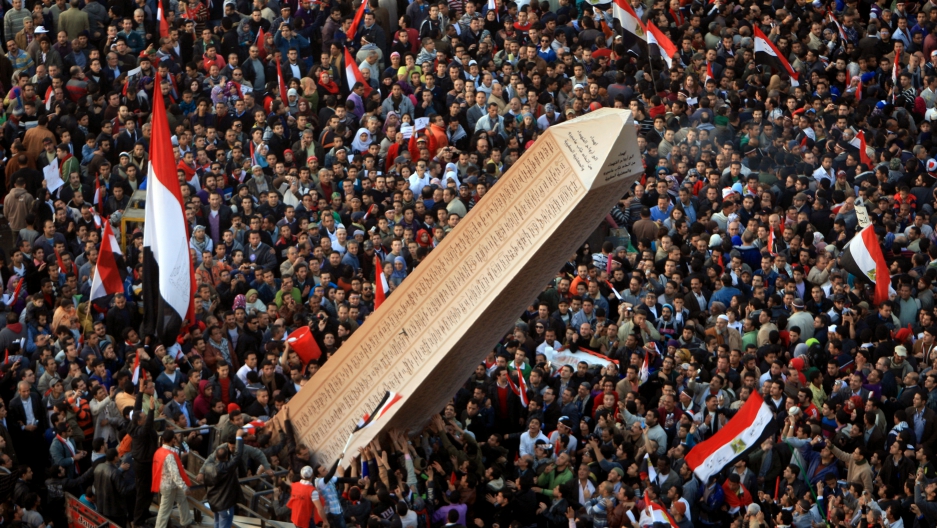 Egyptian protesters carry an obelisk with the names of those killed during last year's uprising, at a huge rally in Tahrir Square on January 25, 2012, marking the first anniversary of the uprising that toppled president Hosni Mubarak as a debate raged over whether the rally was a celebration or a second push for change. AFP PHOTO/MAHMUD HAMS
Credit: MAHMUD HAMS
Share

BEIRUT, Lebanon — A broad study of Arab public opinion released after protests, uprisings, and revolutions began sweeping the Middle East has found broad support for pluralistic democracy, though a significant minority is opposed to accommodating opinions with which they disagree, according to Al Jazeera, which described the poll as "the first of its kind."

The Arabic Centre for Research and Policy Studies (ACRPS) surveyed the public opinion of people in 12 countries – Yemen, Saudi Arabia, Mauritania, Morocco, Algeria, Tunisia, Egypt, Sudan, Lebanon, and Palestine, Jordan, and Iraq. Al Jazeera called the poll “the largest conducted so far in the region,” and noted that it highlighted a “trans-national, trans-border public consensus” of Arabs.

The survey covered a wide variety of topics, such as religiousness, trust in government institutions, perceptions of secular and religious fellow citizens, corruption, perception of external threats, and the Arab-Israeli conflict.

The study noted that a significant minority was resistant to broad pluralism among some countries. Roughly one in three would not support the election of a candidate who was not of the political party they agreed with, for instance. Jazeera called this “a percentage that doesn't bode well for democracy.”

While most respondents said they were "religious," "they mostly don't support the interference of religious authorities in citizens' political choices."

A strong majority of 77 percent trust their country's military, and nearly half trust their governments, but just over a third trust local councils "before the revolutions." A vast majority said corruption was widespread, and just less than 20 percent believe their country enforces laws equally.

A majority of respondents expressed a wish that Arab nations would work to build regional unity, and a strong majority said the "Palestinian question is the cause of all Arabs and not the Palestinians only," Jazeera wrote. Nearly three quarters saw the US and Israel as their countries' biggest threat, while just five percent named Iran.

An even higher portion - 84 percent - rejected their country recognizing the state of Israel, though 21 percent expressed support for peace treaties Israel has struck with Egypt, Jordan, and the Palestinian Liberation Organization. On the issue of nuclear proliferation, the group is split evenly between 55 percent who wish for an arms free region, and 55 percent who "see Israel's possession of nuclear weapons as justifying there possession by other countries in the region."

The methodology used by ACPRS pollsters - a 40-minute face-to-face interview with each respondent - allows for more accurate results than the usual quick phone interviews, Jazeera wrote.

An article in The Gulf Today auythored by an ACRPS staff member noted that the format of the interviews differed from many telephone-based surveys in the West. “Long oppression,” for many Arabs meant that being comfortable answering questions about politics was always an elusive goal. comfortable answer about political questons was sometimes an elusive goal. “To what degree Arab respondents express their minds freely and without any fear remains to be seen," Al Jazeera wrote. "However, for the first time in decades, people seem more willing and able to share their political sentiments, thanks to the revolutions."