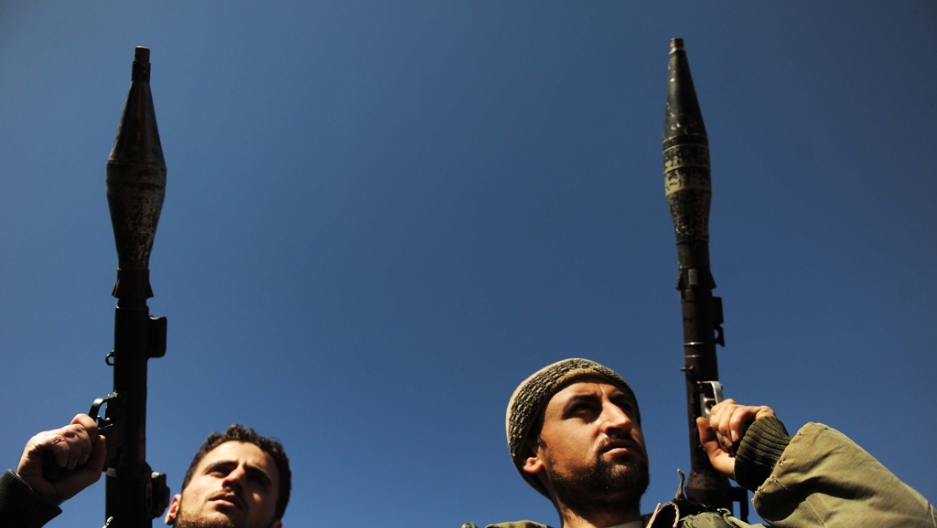 BEIRUT, Lebanon — They fight to defend family or revenge the killing of a loved one. They fight for their country, for God or both. They fight for freedom and justice and, for some at least, in the hope of imposing Islamic law on a secular system.

Some are career soldiers, many are young conscripts, others simply civilians who know how to handle a gun. Some are secular liberals, a few are hardline Islamists who fought parallel, if not alongside, Al Qaeda in neighboring Iraq.

They have coalesced around the single mission of bringing down Syrian President Bashar al-Assad and his regime through armed struggle.

But as the regime escalates its assaults on the Free Syrian Army, as they are known, including a month-long bombardment that forced the poorly armed rebels to withdraw from their stronghold in Homs earlier this month, the armed opposition and their political representatives are struggling to overcome their profound differences.

“We will take the carpet slowly from under their feet because the people feel they failed them,” said one FSA unit commander, known as Abu Omar, speaking candidly about another FSA unit known as the Farouk Brigade.

More from GlobalPost: Video: Inside the Free Syrian Army

Both his unit of 150 men and the larger Farouk Brigade were among an estimated 1,200 rebel fighters controlling Homs’ Baba Amr district before Assad’s forces launched a four-week barrage of rockets and mortars on Feb. 4, which rights groups estimate killed at least 700 people and injured 2,000 more, mainly civilians.

Speaking on camera having crossed into Lebanon, Abu Omar lauded the “honorable” and “heroic” fighters who resisted the regime’s bombardment for 27 days before making a “tactical withdrawal.”

Off camera and speaking freely, he branded as “dogs” those leaders of the Farouk Brigade who “ran away” from Baba Amr three days before the regime sent ground troops in. Civilians in towns near Homs like Qseir and Bweida, said Abu Omar, were so furious with local Farouk Brigade fighters for failing to come to the aid of struggling FSA units in Homs that they spat in their faces.

Having fought hard in December and January to gain control over most of Baba Amr, Khaldiyeh and Inshaat, three major Sunni opposition strongholds in Homs, the withdrawal of the FSA from those neighborhoods was not only a strategic defeat but it left any remaining civilians defenseless against Assad’s militias.

In the days after Homs fell, dozens of civilians were stabbed to death or executed by the regime's Shabiha militiamen, according to rebels and activists in the city. The Shabiha are drawn from the minority Allawite community, an offshoot of Shiite Islam that makes up around 12 percent of Syria’s population (compared to 75 percent Sunni) but dominate its leadership.

A career soldier, Abu Omar described tensions between defected officers such as himself — who see themselves as natural leaders of the armed rebellion — and the opposition’s religious figures.

Among those are some ultra-conservative Sunni Salafis with long-standing ties to patrons in Gulf countries like Saudi Arabia and Qatar, both of whom openly support the FSA and are believed by diplomats to be sending cash to Syria’s rebels to buy arms.

“They are receiving money but we don’t know what they are doing with it,” Abu Omar said.

One of those in Homs who openly acknowledges receiving large sums of money to buy arms is an elderly Salafist leader known as Abu Annas al-Homsi, who fought with jihadi groups against US-led troops in the wake of the 2003 invasion of Iraq.

Though acknowledging the FSA, Homsi said its leader Col. Riad al-Asaad (no relation to the president) did not represent more than 20 percent of the fighters on the ground, which include his own militants, fighting in his words, “a jihad for God” to “liberate our country and defend our religion.”

“We want a Syria for all sects but I support implementing Islamic law because the majority are Sunni and when Syria was under an Islamic Caliphate it was a very successful time,” Homsi told GlobalPost in a recent interview.

Also supporting the armed rebels — with food, satellite phones, medicine and hospital treatments — is another political Sunni Islamist group, much larger and much more organized: The Muslim Brotherhood.

It was members of Syria’s Muslim Brotherhood who led the first major armed rebellion against Assad’s father, Hafez, culminating in the 1982 massacre in Hama, just north of Homs, during which Assad’s troops pounded civilian areas with artillery before going house to house, killing an estimated 20,000 people, the majority civilians.

The role of the Muslim Brotherhood in the current uprising has not been well documented, but a 29-year-old Lebanese member of the group, from a village on the northern border with Syria, proudly described how he helped equip activists in Homs with internet and phone connections, as well as food and medicine.

“I am proud to be a member of the Muslim Brotherhood and we do not hide the fact that we support the Syrian revolution and support the Free Syrian Army who are defending the Syrian people,” he said.

When injured FSA fighters cross into Lebanon for emergency treatment the majority are received in a private hospital in Tripoli run by an Islamic charity believed to be close to the Muslim Brotherhood.

But religious motivation was not what drove 22-year-old Mohammed, a conscript, to defect from his brigade’s deployment to Damascus and return home to Homs. His brother had been arrested and killed, said Mohammed, by members of Airforce Intelligence and the young man now fights with the a group of 15 defected soldiers and five armed civilians.

“I am not religious and I don’t even pray,” Mohammed said. “I fight to revenge the killing of my brother. But I am a Sunni and it is hard to hear that Allawite Shabiha are attacking women who wear the veil. This increases sectarian feelings among Sunnis.”

Spread across a wide spectrum of ideologies and backgrounds, the FSA must also struggle to maintain cohesion amid the chaos unleashed in a country pervaded by secret police.

Abu Annas al-Homsi, the Salafi leader, said his group had fought with men claiming to be FSA but which he said were in fact regime plants, while Capt. Ammar al-Wawi, another FSA leader, said his men had arrested several members of “gangs who pretend to be in the FSA but who damage the revolution.”

Divisions on the ground reflect and are likely exacerbated by open feuds between rival leaders of the armed uprising and their civilian representatives.

In mid February, Riad Asaad, who was one of the earliest high-ranking defectors who first made public the FSA, went on TV to brand the Syrian National Council (SNC), the mainly exiled political opposition group that has gained the ear of international powers, “traitors” for failing to support the rebels with money and supplies.

The move followed the formation of the Supreme Syrian Military Council by General Mustafa Sheikh, who outranks Riad Asaad but only defected in January. Riad Asaad has since been named as head of operations and Sheikh as leading the defected officers.

After months of resisting calls to support the FSA, Burhan Ghalioun, head of the SNC, announced on March 1 the formation of a Military Bureau to “organize and unify” the armed opposition “under the political supervision of the SNC.”

“With all due respect, Ghalioun is a professor, not a politician,” said Abu Omar. “He understands politics but he has not practiced it. On the ground we are organizing ourselves, not waiting for the SNC to end their disagreements.”

Given the rifts, Western diplomats say they have no plans to arm the FSA, arguing such a move would lead to a full blown civil war between the Allawite-dominated regime and the Sunni-led rebels.

It’s a view not shared by Imad Salameh, professor of political science at the Lebanese American University in Beirut.

“Civil wars typically need two equal-sized groups to fight one another and this does not exist in Syria,” he said. “The international community finds pretexts to make the Syrian revolution complicated, arguing there are Islamist fundamentalists in Syria and so to arm the rebels would mean weapons going to Al Qaeda.

No revolution in history has ever been perfect: That’s why revolutions start in the first place. The way to marginalize extremists is to insist on human rights and justice. But the international community is doing very little.”

As the sectarian violence in Homs peaks and the regime uses heavy weaponry to shell its own population with seeming impunity, both FSA and civilian opposition leaders warn conditions are growing ever more favorable for the growth of extremism.

“The Syrian people are desperate, poor and bleeding and are disappointed by the non reaction of the international community,” said Abu Fares, a member of Homs’ Revolutionary Council who lived through the latest assault on the city. “This is the environment for radical groups to come and sympathize. Every day of killings helps the extremists and weakens the moderates.”