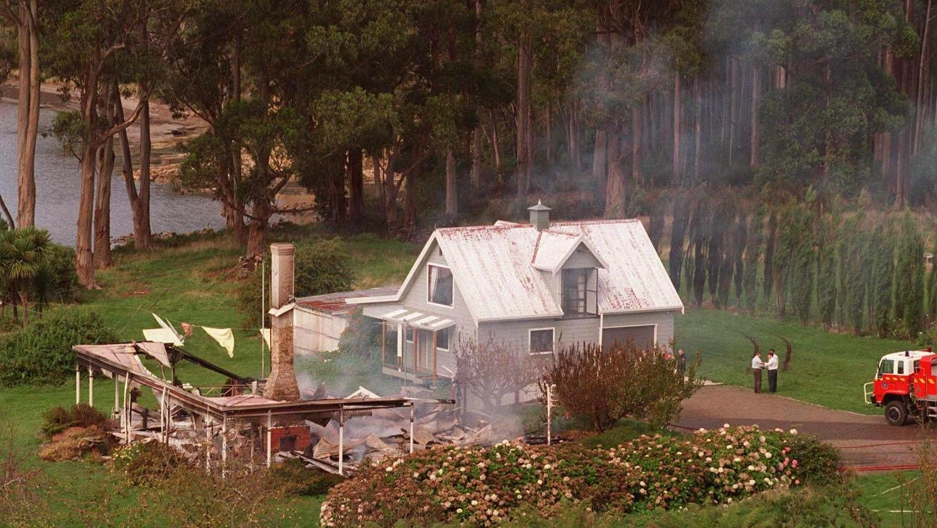 A photo taken April 29, 1996, shows the remains of the guesthouse in Port Arthur where gunman Martin Bryant killed 34 people and injured 19 others.
Credit: WILLIAM WEST
Share

The $35,000 Glover Prize was awarded to Sydney artist Rodney Pople for his landscape painting of Port Arthur. The painting shows Bryant, who killed 35 people at the convict settlement in 1996, holding a gun in the foreground.

According to the Hobart Mercury, the awarding of the prize to the painting has angered those immediately affected by the Port Arthur Massacre.

The paper interviewed a Tasmanian detective who spent 24 hours at the scene of the massacre and twice interviewed Bryant, John Warren, who said:

"I can't comprehend how someone can be so insensitive to all the victims and people who have been scarred for life.

"They would be outraged and so am I."

He added: "I think it is in very poor taste."

Port Arthur Historic Site Management Authority chief executive Stephen Large told the paper that any publicity or images associated with Bryant were not helpful to those affected by the Port Arthur massacre.

The Australian newspaper quoted one of the judges, Doug Hall, as saying:

"It is a fantastic picture and it's done quite sensitively" and adding, "the one thing we all agreed on it was definitely not gratuitously provocative."

"The fact it deals with recent history in some ways it's really quite important," he reportedly said.

Pople has himself defended his the painting, saying that as an artist it was "his role to sometimes bring issues up that were uncomfortable."

Pople, who was living in Sydney at the time of the massacre, reportedly said that while he was aware of how deeply hurt Tasmanians had been by the massacre:

"There are too many artists just doing things for the market and I tend to want to do work that has a bit more of an edge to it."

According to the ABC Online, he said: "It wasn't painted to upset anybody, but if it does I hope that they see the painting was painted in the light that doesn't glorify Martin Bryant.

"He's part of the landscape so why ignore it, people said to me 'you should never do that if you're painting' and I said 'well, I'm the sort of artist who doesn't really pull any punches', art through the ages to me that says anything cuts through the ice."