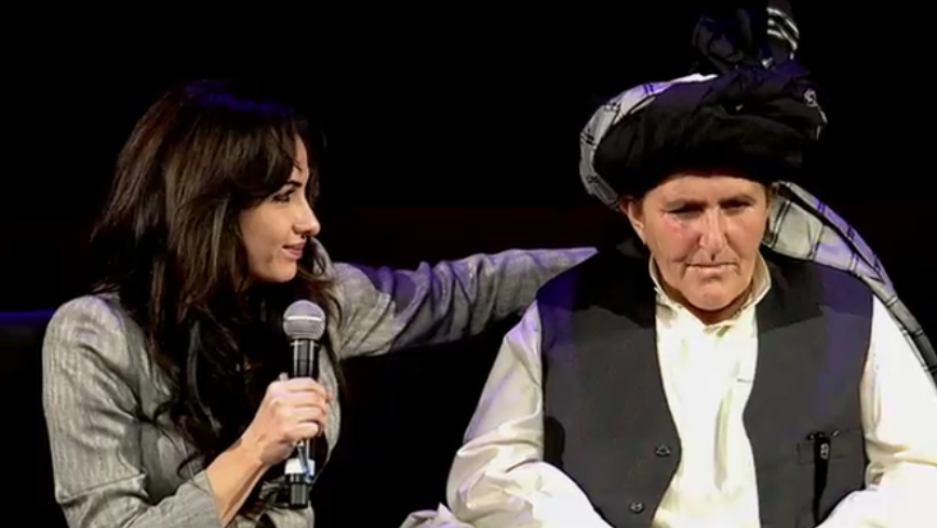 Bibi Hokmina, a member of the Afghan Provincial Council, addressed the Women in the World conference in New York City, March 9, 2012. Her visit was made possible in part by USAID.
Credit: Women in the World
Share

NEW YORK — Bibi Hokmina, an Afghan provincial council member, wore the traditional turban, vest and robe of an Afghan man as she spoke before the Women in the World Summit in New York City on Friday.

Since she was a young girl, Hokmina has been dressing as a male at the urging of her father. She has become a widely respected leader in her home province of Khost.

"Why would a man be any more empowered than a woman in the world?" she asked through a translator, her voice almost musical and her gestures decisive as she addressed the panel moderated by news anchor Christiane Amanpour.

It became clear that Hokmina's power among men is a rare exception in Afghanistan as the discussion focused on the view of the country through the eyes of Afghan women.

For many, the view is bleak and dangerous.

Half of all Afghan girls become child brides, often abused, separated from their families and sometimes murdered. This week GlobalPost senior correspondent Jean MacKenzie published a 'Special Report' titled "Life Sentence: Women & Justice in Afghanistan" looking at just how bad Afghan women have it despite pledges from American leaders to improve their lives.

The Taliban, which vehemently opposes women's rights and employs tribal practice including the bartering of women and girls, continues to hold substantial territory in Afghanistan and observers say the U.S. is likely to make a deal with the Taliban is it reduces its military presence and prepares to wind down the war.

That would be a devil's bargain, the panel agreed.

"How do we hold on to what we've promised Afghan women and not abandon them?" asked Zainab Salbi, founder of Women for Women International. "Women are the bellwether for the direction of the society."

Hokmina warned that if the Taliban — pushed out of national power by the U.S. invasion in 2001 — retakes the country, the state of women will "take a bad turn."

Although as Amanpour mentioned, the Afghan Constitution dictates that 25 percent of the country's lower chamber of parliament be women, that statistic becomes window dressing in the face of widespread abuses of women.

"We cannot take anymore," Hokmina said, referencing the decades of occupation and violence she and her people have lived through. "It cannot go back to where it was. This is not a time to abandon Afghanistan."

Asked what Afghan men and women may have learned from her journey to malik — or tribal chieftain — she took an aggressive turn:

Amanpour called for Western countries to engage with women's rights in Afghanistan, particularly those whose militaries and aid groups have intervened in different ways since 9/11:

"You can't bring peace to Afghanistan on the backs of abuses of women's rights," she said. "So many have given blood and sacrifice for the past 10 years so the country doesn't go back to the way it was."

GlobalPost web producer for Special Reports Alex Pearlman will be liveblogging and tweeting the summit, and you can follow along (@lexikon1) with the hashtag #wiw12. To see the weekend's agenda, head to The Daily Beast.