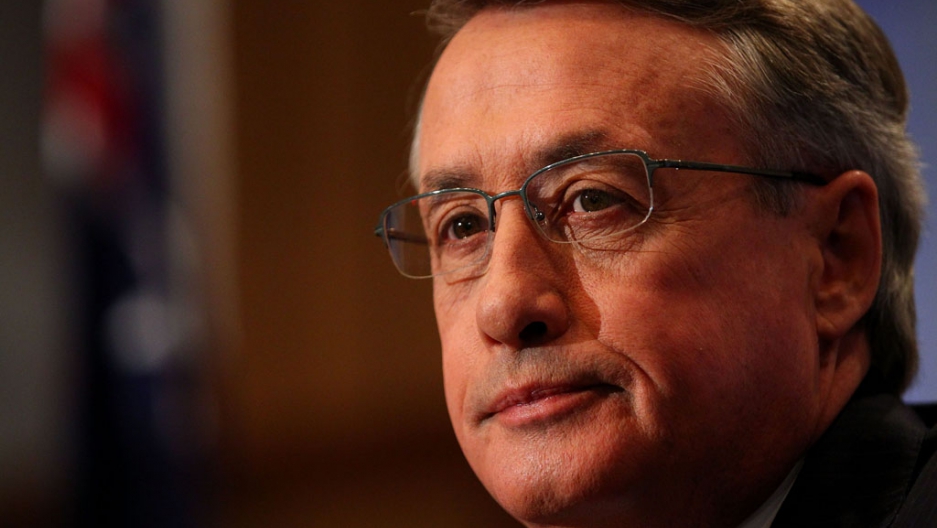 BRISBANE, Australia — Billionaires might be able to buy more pretty baubles, but they still only get one vote.

That appears to be what Australia's deputy prime minister was counting on when he attacked some of the country's richest citizens.

The sustained assault by Wayne Swan — aimed largely at outspoken mining billionaires — began a week ago, with an essay in which he warned that "the rising power of vested interests" endangered Australia's success.

The article, published by The Monthly magazine — and the avalanche of responses to it — have dominated public discussion since.

Swan assailed billionaires' efforts to stop a new mining tax, due to take effect July 1. Their well-funded publicity campain led the minority Labor government — rattled by the potential electoral knock-on effect — to water it down.

Initially, in 2010 then-Prime Minister Kevin Rudd proposed it as a 40 percent levy on "super profits" of mining companies. After an infamous "Billionaires protest" and vigorous lobbying, the Labor government ousted Rudd. A watered down version of the tax will fund a range of measures for low-income households, the government has said.

An irate Swan, who is also treasurer, described the influence of "the 0.01 percent" as a "poison" that had "infected our politics and is seeping into our economy." Naming mining magnates Gina Rinehart, Andrew Forrest and Clive Palmer, Swan said vested interests were "undermining our equality and threatening our democracy."

Worse, he wrote, billionaires were undermining the Australian notion of a "fair go" — which dictates that everyone should have an opportunity to prosper. "A handful of vested interests that have pocketed a disproportionate share of the nation's economic success, now feel they have a right to shape Australia's future to satisfy their own self-interest," he wrote.

His inspiration? The US Republican presidential primary.

"Today, when a would-be US president, Mitt Romney, is wealthier than 99.9975 percent of his fellow Americans, and wealthier than the last eight presidents combined, there’s a global conversation raging about the rich, the poor, the gap between them, and the role of vested interests in the significant widening of that gap in advanced economies over the past three decades."

He continued: "This is a debate Australia too must be part of."

Swan lamented the mining sector's dominance: "The infamous billionaires’ protest against the mining tax would have been laughed out of town in the Australia I grew up in, and yet it received a wide and favorable reception."

His outburst also follows the purchase of a major shareholding of the Fairfax media group by Rinehart, the nation's richest person, which drew protest that the mining magnate was trying to buy a seat at the boardroom table in Australia's most influential stable of newspapers.

Perhaps predictably, Swan drew immediate fire from conservatives — who dismissed his arguments as the "politics of envy" and accused him of attempting to incite class warfare.

And on March 6, a laundry list of Australia's leading entrepreneurs lined up to denounce Swan's comments, saying that the country had benefited from the investments of such people as Rinehart, Palmer and Forrest.

Graham Bradley, deputy president of the Business Council of Australia, pointed to entrepreneurship and philanthropy in the US, telling The Australian newspaper: "Were Australia lucky enough to have a Bill Gates or a Steve Jobs or Warren Buffet, I wonder if the Treasurer would be as quick to criticize them. I'm quite certain his American counterpart would never attack those [people] in a personal way but would have held them up as models."

Entrepreneur Dick Smith, who made millions from an eponymous electronics empire, said the people targeted by Swan were "what I would call the ultimate capitalists, and we benefit greatly from having these people."

Smith told The Australian: "The reason we are so wealthy is we have the Gina Rineharts and the Twiggy Forrests. They are actually Australian-owned companies, the wealth stays here. I think that's good."

"If those few become incredibly wealthy then I think the American idea or the Myer family idea of sharing and distributing that wealth is to be applauded," she said in The Australian.

At least one of Swan's targets let his money do the talking. The company run by Forrest, Fortescue Metals, hit back with full-page advertisements in major newspapers on March 5, describing his article as an "irrational outburst" and "unfair, untrue and divisive."

"For Mr Swan to demonize Andrew Forrest ... for not paying taxes where there was no taxable income — is an act of cynical hypocrisy," the advert quotes Fortescue chairman Herb Elliott as saying.

Clive Palmer, Australia's fifth-richest person owing to his coal mining interests, dismissed Swan's criticism, saying he should focus on learning more about how an economy worked.

Everyday Australians have a say

Somewhat surprisingly in a country that voted for the center left Labor Party at the last two elections, the billionaires can count on some sympathy from the man in the street.

"It's a bit hard for us to have a go at [miners] because that's where the money's coming from. The miners are employing people," said attorney Lucy Hamill, 32. "If it's not them it's going to be someone else.

"They've worked bloody hard to get where they've gotten. And if they want to [buy influence] then good on them. I'm definitely pro-billionaire — I wish I was one."

Chef Daniel Petrie, 27, a Labor voter, couldn't agree more. "I'd do the same thing if I could," he said of the billionaires' supposed influence peddling. "Let them be, man. They're the same an anyone else walking around here, except they have a fatter wallet than me."

However, Swan's message evidently resonated with Tony Lawlor, 57, a former nurse who felt that $1 billion should be enough for any one person for a lifetime, so "what more could they possibly want. Get a bigger yacht — or a bigger harem.

"Besides which, have you noticed how unhappy most of those billionaires look. Overweight, unhealthy — I wouldn't want any of them deciding what's best for all of us."

Undeterred, Swan re-entered the fray Monday, telling the National Press Club that: "For every Andrew Forrest who complains about high company taxes, and then admits to not paying any, there are 100 or more that go about employing Australians and creating wealth in a constructive way."

He said that he was not attacking the rich, rather highlighting an imbalance in influence and opportunity.

"There has been a perceptible shift in this country over the past few years towards a stronger and stronger influence being wielded by a smaller and smaller minority, and more and more plainly expressed in their own private interests."

While accepting that entrepreneurs boost employment, Swan said the likes of Rinehart, Forrest and Palmer seek to wield influence beyond their immediate business interests.

"They are openly seeking to exert an inordinate degree of political power, and I'm highlighting that fact," he said.

As for Forrest's claims that he gives wads of cash to charity, Swan had a retort for that too: It's no substitute for paying taxes.