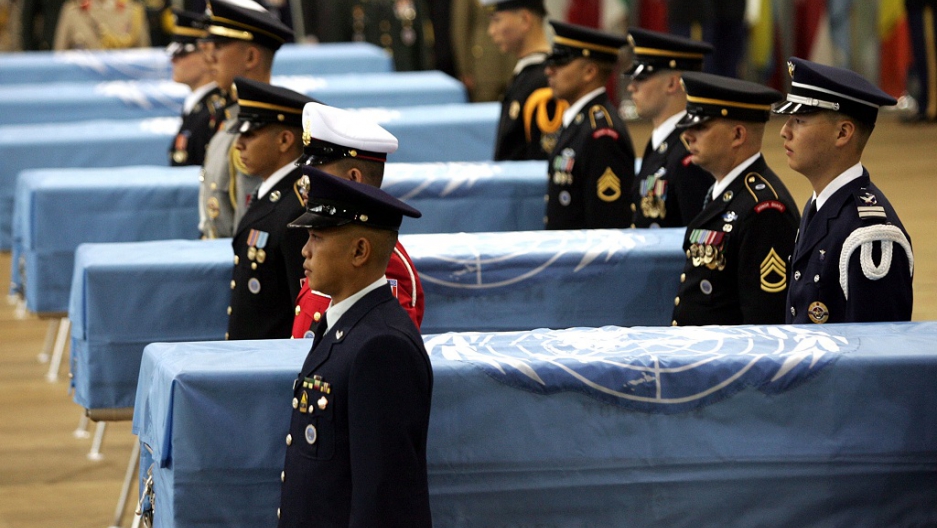 United Nations Command honor guards carry coffins containing the remains of soldiers who fought in the 1950-53 Korean War. The remains were found during recovery operation in North Korea, that had to be stopped because of fears for security concerns. The search is now due to resume in April.
Credit: Chung Sung-Jun
Share

The search for the remains of thousands of American troops who went missing in action during the Korean War is about to resume in North Korea.

According to the Associated Press, an American ship has already taken equipment to North Korea for the searches, while two advance team with 30 members each will arrive later in the month in time to begin the mission in April.

During the last search operation, which lasted 10 years, the bodies of 92 troops were recovered and identified, says news.com.au.

However, the operation had to be suspended over concerns for the safety of American personnel.

Another AP report published by the Washington Post, says that the resumption of the search is a sign of easing tensions between North Korea and the US.

More from GlobalPost: Women get $4 for brother killed in Korean War

It says that the last operation "was the only cooperation between the militaries of the two nations, which formally remain at war because the 1950-53 conflict ended with a cease-fire and armistice, not a formal peace treaty."

The fresh search will focus on two areas where more than 2,000 soldiers and Marines are recorded as missing, the report says.  Those are Unsan County, north of the capital Pyongyang and near the Chosin Reservoir, in the country's North.

About 8,000 service members are reportedly still unaccounted for from the Korean War, which left about four million dead.