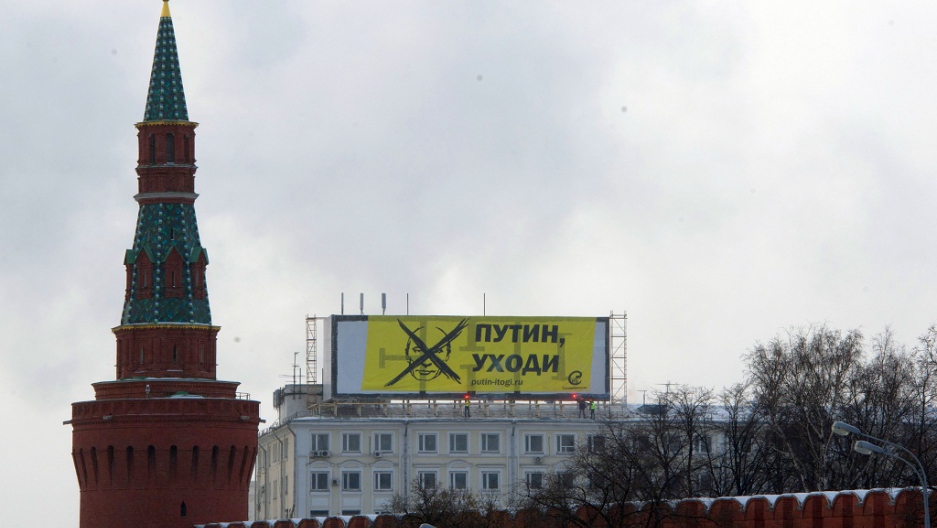 Opposition activists hang their banner reading: 'Putin, leave!' atop a bulding's roof, just over the Moskva River river from the Kremlin (foreground) in Moscow, on February 1, 2012
Credit: -
Share

Two young mothers suspected of being in the band Pussy Riot were arrested by Russian police Sunday night. Nadezhda Tolokonnikova and Maria Alyokhina could face seven years in prison. The charges? Hooliganism.

More specifically, the feminist band got in trouble for storming Moscow's Cathedral of Christ the Savior in February, RIA Novosti reported. They then performed an obscenity-filled "punk prayer," punctuated with an anti-Vladimir Putin message: “Holy Mother, send Putin packing!" they chanted, according to the New York Times.

The women wore masks in the video, making it difficult to tell their identities. But the church soon demanded that the women be identified and arrested. Legislators opened a criminal case on hooliganism charges, which can carry a seven year sentence, RIA Novosti reported. In response, the Russian riot grrls in detention have gone on a hunger strike.

Photos of the detainees and their young children were posted on the Pussy Riot blog.

"To put it mildly, I would not like it if some cranky chicks broke into a church while I was there and started running around the altar,” Navalny wrote, according to a New York Times translation.

"[Is the] offense so socially dangerous to keep the girls behind bars? obvious - no," Navalny wrote.

Pussy Riot is comprised of 10 full-time members who organize guerrilla shows in Moscow, the Guardian reported. They criticize Vladimir Putin and Russia's authoritarianism while wearing colorful balaclavas and miniskirts.

In an interview with Gazeta.ru, Pussy Riot cited the United States riot grrrl movement as an influence. "We heard some officials demanded our imprisonment after the performance in the Cathedral of Christ the Savior," the band told Gazeta.ru last month. "But we only wanted to stress the far too much communication between the church and the government. Our Patriarch is not ashamed of wearing watches worth $40,000, which is intolerable when so many families in Russia are on the edge of poverty."

The video below captures the infamous "punk prayer" show: