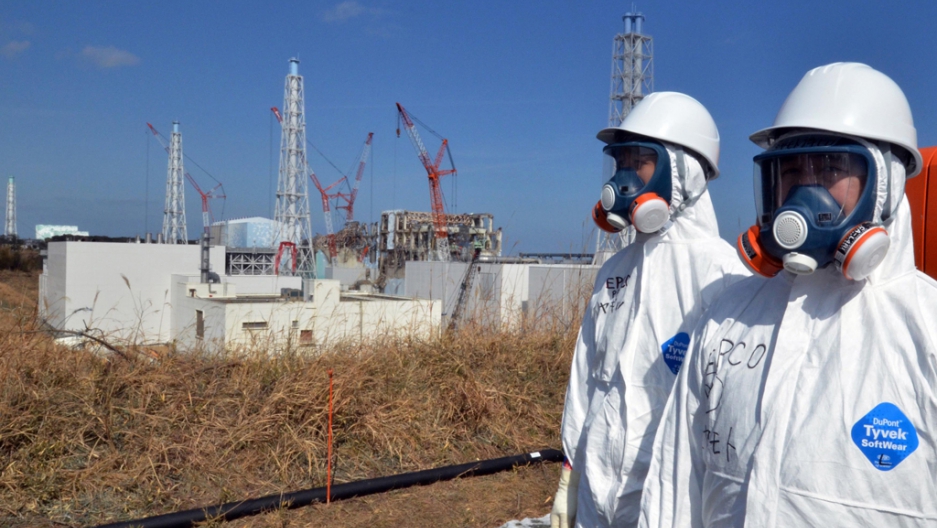 This file picture taken on February 28, 2012 shows workers standing near the stricken Tokyo Electric Power Co (TEPCO) Fukushima Daiichi nuclear power plant in Okuma, Fukushima prefecture. As of March 8, 2012, Japan has closed all but two of its nuclear reactors following the disaster at Fukushima's power plant. The remaining two may be closed within the next month.
Credit: YOSHIKAZU TSUNO
Share

The New York Times reported today that all but two of Japan’s 54 nuclear reactors have been shut down since the Fukushima disaster last year.

Nearly a year has passed since the Tohoku earthquake and subsequent tsunami knocked out the power supply to the Fukushima power plant operated by Tokyo Electric Power Company, causing equipment failures, a triple nuclear meltdown and the release of radioactive material into the surroundings.

According to The Times, the last operating nuclear reactor is scheduled to be closed next month, which will mark Japan shutting down an industry that once made up a third of its electricity resources.

Reuters reported that this will mean that no nuclear reactors are running this summer, during the peak months for electricity demand. Japanese Trade Minister Yukio Edano told parliament, “A tight supply-demand balance (of electricity) does not affect our judgment on nuclear safety and we are in the process of making that judgment. It is quite possible that no reactors will resume operations towards the summer.”

None of the reactors shut down for routine maintenance have been restarted so far, said Reuters, as they have yet to meet the new safety standards put in place after the Fukushima crisis.

The Economist noted that the shutdowns are unlikely to be permanent, but they are symbolically important nonetheless, for a country that was predicting an increase in nuclear power usage.

CNBC reported that Japan passed a law last August which would require the power sector to start buying electricity from renewable sources from next month onwards.

Meanwhile, the decreased reliance on nuclear power has left a huge economic impact on Japan, as it reported a record trade deficit in the current account of $5.4 billion in January, mainly due to energy imports, according to the BBC. Though Japan’s gross domestic product shrank 0.7 percent, far less than the estimated 2.3 percent, the economic recovery remains fragile.