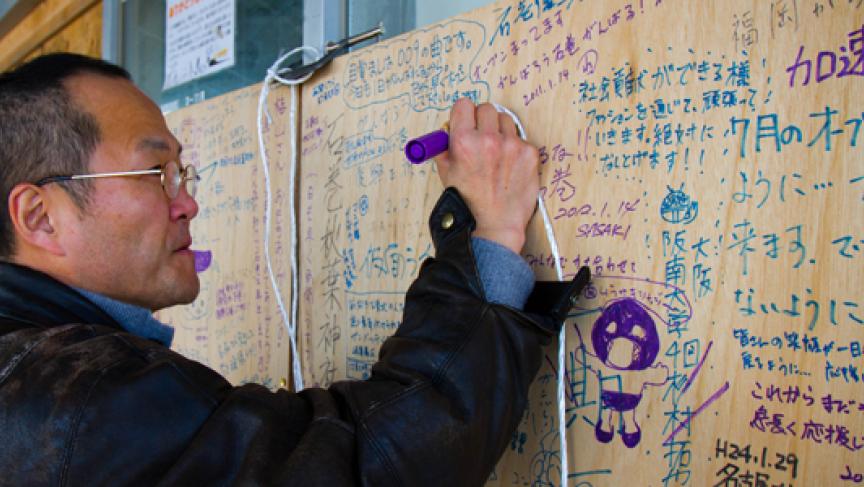 The comic book, or manga, museum in Ishinomaki City has become a makeshift message board since the earthquake and tsunami last March. (Photo by Sam Eaton.)

It may seem an unlikely place to post messages of hope for the tsunami victims.

After all, it is a comic book museum. But this white, dome-like structure is also an icon. Or at least it was. Today the museum sits empty on a windswept island across from what was once the vibrant center of Ishinomaki City.

More than 3,000 people died a year ago in this small fishing port near Sendai. It was the highest death toll of any town hit by the tsunami that slammed into this coast on March 11, 2011, following a massive magnitude 9.0 earthquake centered just off Japan’s northeastern coast. And like most communities in the area, a year later much of the land here in Ishinomaki still lies barren, but for the mountains of wreckage piled on the outskirts of town.

Masatoshi Saijo, who runs the comic museum, said people from all over Japan and all over the world have come here and written notes of encouragement on the sheets of plywood that cover the museum’s battered entrance. Most say things like, “we believe you can reopen,” or, “don’t be beaten by the disaster.” But Saijo’s favorite is the one that says “the Kamen Rider will live forever,” referring to the famed masked character the museum is devoted to.

Saijo said one year after so much of his city was destroyed, those characters, and their stories of banding together to fight evil, have taken on new meaning for the people who survived. The idea of never giving up, he said, or of helping one another — “these are the ideals the cartoon characters aspire to.”

But when it comes to rebuilding Ishinomaki City and all the other towns wrecked by the tsunami, there are no fictional saviors. Just ordinary people trying to rebuild their lives under extraordinary circumstances.

Ken Matsumoto is one such person. His metal shop in Ishinomaki City again buzzes with life. On a recent day, workers were busy grinding smooth the welds on a smokestack they’ve built for a new garbage incinerator.

All the metal shop’s employees came back after the tsunami, some even before there was electricity or food.

But there are still reminders of the wall of water and mud that tore through here a year ago. Matsumoto points out the dark water line on the wall just above his head. And then he points to one of his workers.

“He lost his house and his entire family in the tsunami,” Matsumoto said. “His wife, his kids, even his parents. But he still comes in to work every day.”

Around a quarter of Matsumoto’s 96 employees lost their homes. But he said they all came back, some even before there was electricity or food. First they fixed the machines in the shop, and then they used those machines to fix other machines so that other companies could reopen. All without any help from the government. Matsumoto, who’s 59, saw it as his responsibility to his workers, and his community.

But he also says getting people back to work is only one part of the recovery. The real recovery, he said, will happen when people feel they’re able to live safe and secure lives again. And he said that’s not likely to happen any time soon.

“There’s a saying in Japan,” said Nobuyuki Takahashi, who runs a nonprofit that helps kids and until recently he managed a shelter for tsunami victims. “First you save yourself, then the people around you. And last of all will come the help from public institutions.”

For the most part, Takahashi said, the 320,000 people who lost their homes in the disaster are still waiting for that help. For instance it took the Tokyo government nearly a year to create a standalone recovery agency.

This despite constant reminders of just how vulnerable people still are. Strong earthquakes that can last about 30 seconds, Takahashi said, happen “every day.”

There are hopes that the government’s new recovery agency will streamline the rebuilding process, one that’s expected take at least a decade and cost more than $200 billion.

Takahashi is a proponent of rebuilding the tsunami zone as a model for dense, low-carbon communities, which he believes may mean the difference in keeping the few younger residents who still remain here.

But Takahashi, who himself is 63, said his generation makes up the majority of these towns and villages. And most, he said, want to rebuild just the way it was.

“It’s extremely difficult to go down a new path,” Takahashi said. “It’s natural for people to want to return to what they had before.”

That’s not an option 100 miles up the coast in Kamaishi, the rusting steel and port town. Work crews are still tearing down Kamaishi’s wrecked buildings, but city planners see the cleared lots as an opportunity to tackle problems that have existed for decades.

Kanako Fujiwara, of the city’s reconstruction office, said going back to what was here before the tsunami is impossible, because Kamaishi was already dying. Japan’s rapidly aging population has hit small, isolated towns like Kamaishi the hardest. In four decades, it lost nearly two-thirds of its population, mostly the younger generations.

Fujiwara said if towns like hers are to have any future at all, rebuilding differently is their only hope.

Unfurling a planning map on a table, Fujiwara points to orange shapes that represent new apartments for people who lost their homes in the disaster, and red ones that show new community housing for the elderly. Instead of rebuilding individual homes near the ocean, Kamaishi planners favor green apartment complexes carved into the town’s steep hillsides. And along the river in Kamaishi’s center, concrete embankments would be replaced by a curving earthen barrier that would help absorb a tsunami’s impact and serve as a city park.

Fujiwara said ideas like these will not only make Kamaishi safer, they’ll also a make it a place that appeals to people of all ages. She hopes they may even attract new businesses.

But whether these things are actually built depends on limited recovery funds from Tokyo. And $650 million of this has already been allocated to a single massive construction project — rebuilding the city’s seawall.

When it was completed just a few years ago, the old seawall along Kamaishi Bay was the largest in the world. It was supposed to bring a sense of safety to Kamaishi. Last year’s 30-foot wave tore right through it and killed more than 1,000 people.

Kamaishi resident Naoko Fukunari said instead of rebuilding the wall, the money from Tokyo should be spent on the town’s new housing plans, as well as better roads to escape on in case of another emergency.

In Kamaishi’s business district, which was mostly destroyed by the tsunami, Fukunari pointed out an empty concrete slab where there used to be a shop that she liked to visit.

It had pretty pottery and nice fabric, she said. “But now that it’s gone, the place feels lonely and empty.”

Like many Japanese cities, Kamaishi has already been destroyed and rebuilt many times, by tsunamis, and even by American bombs during World War II. But Fukunari said it’s hard for her to remain hopeful for yet another rebirth.

Instead, she said, she tries to be thankful for the basic things of life, like having food to eat and place to sleep.