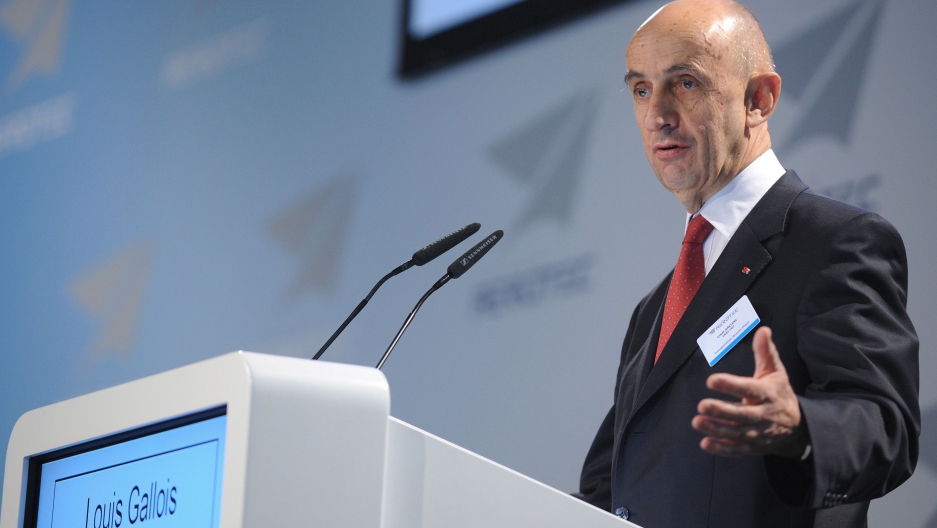 EADS head Louis Gallois told reporters: “We ask the European Union to take into account the global position of almost every country outside of Europe against this [carbon tax] scheme,” adding that China’s opposition could affect the sales of at least two dozen long-haul A330 planes in 2012 and 2013.
Credit: DANIEL MIHAILESCU
Share

China has blocked Chinese airlines from buying Airbus planes amid an increasingly bitter dispute over the EU’s carbon trading scheme, the chief executive of Airbus’s parent company, EADS, has said.

Louis Gallois, head of European Aeronautic Defence & Space Co. NV, said Airbus is being subjected to “retaliation measures” by Beijing, and warned that the European commercial aircraft maker stands to lose business if the EU fails to heed protests from airlines around the globe about the emissions scheme, The Wall Street Journal reports.

“We ask the European Union to take into account the global position of almost every country outside of Europe against this scheme,” he said, adding that China’s opposition could affect the sales of at least two dozen long-haul A330 planes in 2012 and 2013, according to the Agence France Presse.

China has not commented, and it is unclear whether the ban represents official policy or a negotiating tactic, the BBC reports.

Gallois’s comments come a month after Airbus chief executive Thomas Enders warned that the scheme could lead to a trade war, saying: “I’m really worried, also as a manufacturer, about the consequences.”

Despite opposition from over two dozen countries, the EU’s Emissions Trading Scheme (EST), which imposes a carbon tax on the airline industry to reduce emissions and tackle climate change, came into force on January 1.

It levies a charge on flights in EU airspace based on emissions but creates carbon allowances which airlines can “cap and trade.” No air carrier will have to pay a bill until 2013, after this year’s carbon emissions have been assessed.

Opponents say the move violates international law. China has banned its carriers from participating in the scheme, while the US mounted an unsuccessful legal challenge against the carbon tax late last year at the European Court of Justice.

More from GlobalPost: EU tells China it won’t back down in aviation pollution spat