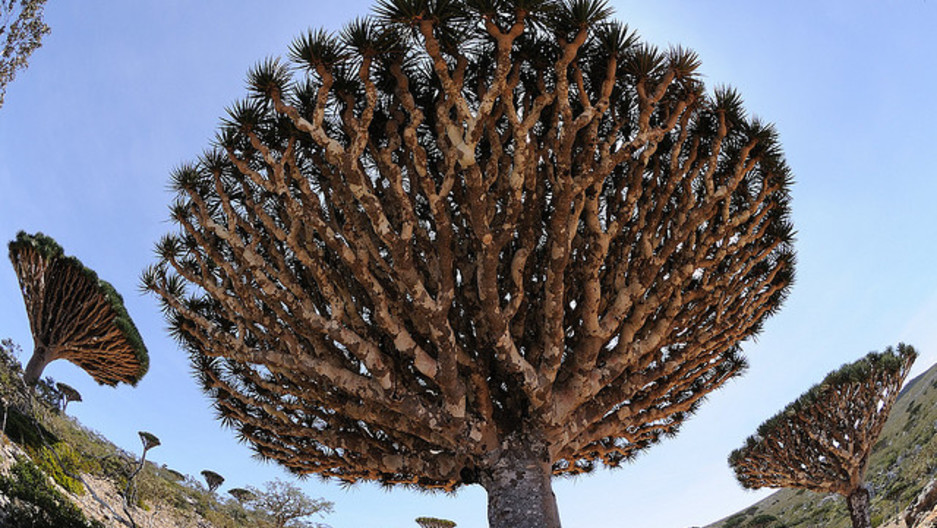 The famous dragon blood trees of Socotra. When cut, the trees ooze a scarlet resin that has been used in paintings. (Photo courtesy of Stefan Geens/Flickr).

Off the coast of Yemen, there's a marvel of biodiversity that's often compared to the Galapagos Islands. And it's becoming a magnet for touritsts.

Socotra is one of the four natural UNESCO World Heritage sites in the Arab world, said Belgian biologist Kay Van Damme, chairman of the environmental preservation group Friends of Soqotra.

While the islands are frequently compared to the Galapagos, Socotra is actually much older. Millions of years ago, Socotra broke away from the mainland and drifted into the Gulf of Aden. Over years, this geographic isolation gave rise to one of the highest concentrations of endemic species in the world.

One of the most surprising features of the landscape are the dragon blood trees.

"The dragon blood trees on Socotra have very strange, bizarre shapes,” Van Damme said. “They are umbrella shaped — they look like big green umbrellas. This group of trees is actually called a 'living fossil,' they were present in some parts of Europe even millions of years ago."

The dragon blood trees get their name from the potent red resin contained in their bark.

"If you make a small scratch in the tree, there is a red resin that comes out and hardens,” explained Van Damme. “People used its pigment for paintings in the 16th century, and the color is so perfect for (depicting) blood. It is also used as a varnish. People say that the original Stradivarius violin, the color of the violin is from Socotran dragon blood trees, so they have a role in human history."

Socotra is also famous for its caves. The caves of Socotra serve as access points to underground rivers that hold unique ecosystems as well.

“We have found underground crabs and underground shrimps and very strange spider-like whip scorpions,” Van Damme said. “I have always counted myself lucky to be part of these expeditions to go inside and to have been the first in these places.”

According to Van Damme, preservation of the islands’ rare flora and fauna is critical.

“Not only is the dragon's blood tree unique,” Van Damme said, “there are more than 300 plant species which occur on Socotra and nowhere else in the world. About 90 percent of the all the reptile species, which are the snakes, the beautiful geckos, and the chameleons, are only on Socotra ... they need protection.”

Ever since the addition of an airport in 1999, the islands have played host to a steady stream of tourists during the non-monsoon months. However, human presence on the islands is not a new phenomenon on Socotra. It is estimated that the islands have been inhabited for over 2,000 years. While other biologically rich islands carry a heavier burden of visitors, Socotra is also home to a year-round population of over 40,000 people.

Van Damme cites pollution, road construction, and infrastructure development as the greatest threats to the biodiversity of the island.

In order to preserve the islands’ distinctive biology during the tourist season, the government has chosen to avoid large scale tourism by encouraging the construction of small, locally-owned hotels and campsites.

But Van Damme said these efforts won't be enough to protect Socotra from environmental degredation and species loss.

Further information about preservation efforts on Socotra can be found on the website of The Socotra Archipelago Conservation and Development Programme.

Socotra - Isle of the Dragonsblood from peter franc on Vimeo.