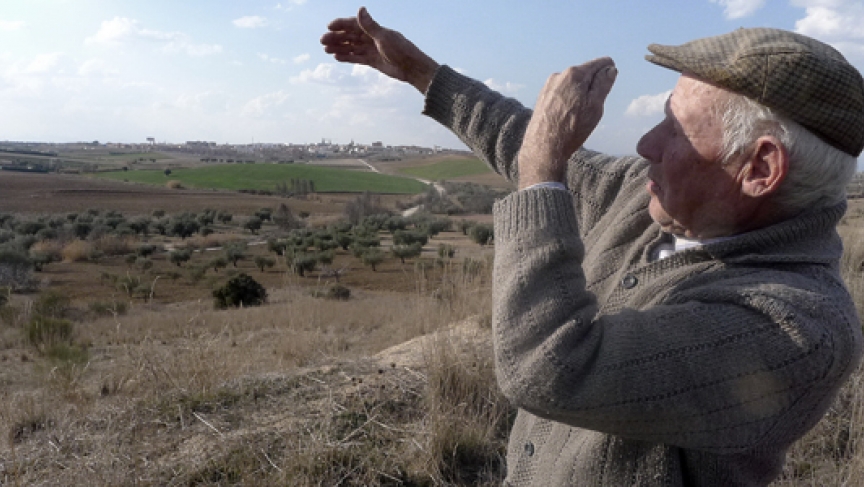 Farmer Pepe Pablo Perez looks out to his land, the property taxes on which, after the zoning change, have jumped from $40 to $15,000 per year. (Photo by Gerry Hadden.)

For about a decade, beginning in the late 1990s, Spain went on a building binge.

Any farmer lucky enough to see his agricultural land rezoned could sell it for huge profits and turn in the pitchfork forever. But the real estate bubble burst in 2007.

Navalcarnero, about 20 miles southwest of Madrid, was caught off guard.

At a corner café, the president of the local property owner’s association, Paco Navarro, said Navalcarnero’s population tripled during the housing frenzy, as developers snatched up land and built apartment blocks.

Navarro said some property owners got lucky. Their land went up in value at least 10 times. But now it has all stopped.

That is the problem.

It stopped, Navarro said, just as Navalcarnero was signing off on the latest rezoning plan.

Navarro said the money from building permits would have paid for basic services in town for everyone. But with the collapse of construction everyone got caught.

About 300 farmers got the worst of it. When their land was rezoned last year, its assessed value increased, based on what could be built.

Some 2,500 acres of wheat fields and olive groves, nearly a mile outside the village, are now being taxed as if they could be neighborhoods. Pedro Pablo Perez, 86, owns 25 acres here. It has been in the man’s family for generations.

He said he typically paid about $40 in property taxes each year. Until last year. The first bill after the rezoning was for $15,000. Perez said his wife nearly had a heart attack.

“This tax hike is ruinous,” he said. “It is going to ruin us all. It’s impossible to pay.”

Perez said his entire wheat crop is worth less than the new tax.

“I don’t mind paying my fair share, but why should I pay this random amount that some suits in city hall decided on?” he asked.

To be fair, city hall did waive most of the farmers’ new tax bill last year. Mayor Baltasar Santos said he recognized the tough spot rezoning has put farmers in. Santos was not available for an interview, but he recently told Spanish TV he believed the zoning change would ultimately benefit everyone.

“We’d be going back to having farmland, which does produce something, but now that the parcels are buildable they’re going to generate big investments, wealth, and jobs,” Santos said in the interview.

But with the boom over and Spain sinking into recession, many here wonder where those jobs will come from. Nationwide, unemployment stands at almost 24 percent. The government predicts another 600,000 jobs will be lost before year’s end.

So where once farmers might have gotten rich, there’s now no one to sell their land to. And if they don’t pay the new higher tax, the town could seize their land.