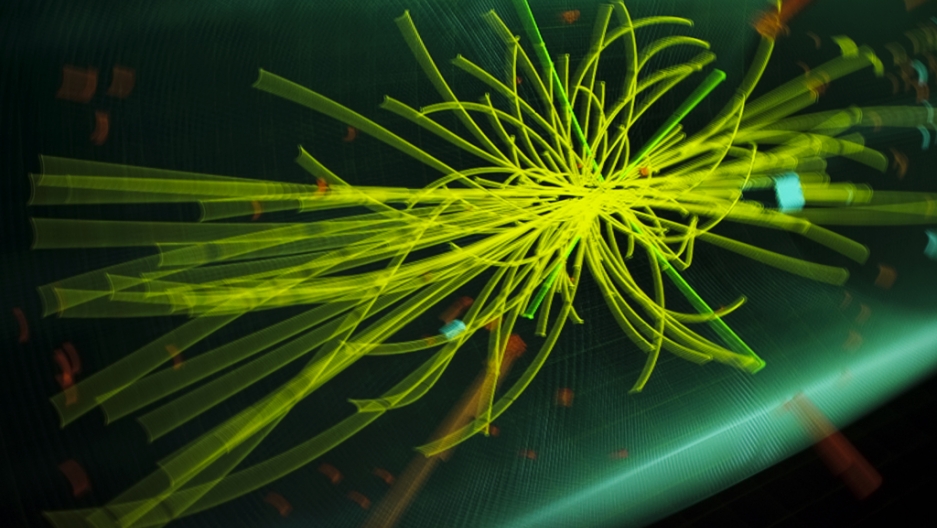 A graphic showing traces of collision of particles at the Compact Muon Solenoid (CMS) experience is pictured with a slow speed experience at CERN on December 13, 2011 in Geneva. Physicists from the Fermi National Accelerator Laboratory in Batavia, Illinois, announced on March 7, 2012, that they have found the “strongest hint of the existence of a Higgs boson,” an elusive subatomic particle that is thought to be a basic building block of the universe.
Credit: FABRICE COFFRINI
Share

Physicists from the Fermi National Accelerator Laboratory in Batavia, Illinois, have found the “strongest hint of the existence of a Higgs boson,” or the elusive “God particle,” according to The New York Times.

Scientists had to analyze the data collected from some 500 trillion sub-atomic particle collisions produced by the Tevatron collider before it closed in September 2011. The collisions are “designed to emulate conditions right after the Big Bang when the universe was formed,” according to The Christian Science Monitor.

The results are not statistically significant enough to be termed a “discovery” because they fall short of the 5 sigma level of certainty, falling around 2.2 sigma, said the BBC. This means that there is a one in 36 chance that the findings were happenstance.

The findings, however, do support the idea that the Higgs particle exists near a mass of 125 gigaelectronvolts, providing independent confirmation of the results from the Large Hadron Collider in Geneva, Switzerland. The “bump” in data found at Fermilab suggests that the Higgs boson resides in the region between 115 and 135 gigaelectronvolts, according to The Economist.

More on GlobalPost: Higgs boson or 'god particle' closer than ever to being found (PHOTOS)

The Higgs boson is the key to understanding why matter has mass. As The Times explained, the God particle is the key piece of the Standard Model, a set of equations that has defined high-energy physics and explains three of the four fundamental forces of nature. However, the Higgs boson has remained elusive, and though its behavior is understood, its mass remains a mystery.

Fermilab physicist Rob Roser said, “Globally the world is starting to see a consistent picture. I don't think there's any place for the Higgs to hide. We'll know the answer one way or another by the end of 2012,” according to the Associated Press.

The findings were presented in Italy, at the Moriond physics conference.