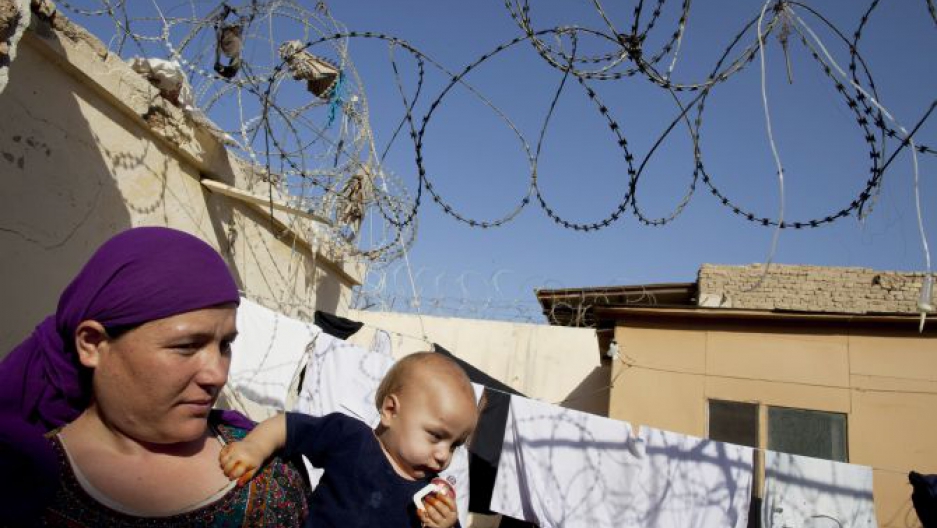 Ahsa Gul holds her son Sayed,11 months, inside the women's prison in Mazar-e-Sharif, Afghanistan on October 22, 2010. According to Afghanistan's Ministry for Women and the Independent Human Rights Commission, many women there are incarcerated are detained for "moral crimes." These so-called crimes include everything from running away from home, refusing to marry, marriage without proper family consent, and attempted adultery.
Credit: Paula Bronstein
Share

But there is nothing that is “open” and very little that is rehabilitating in what is actually a prison for teenagers.

In a room containing three sets of bunk beds, we find Nadia, who looks barely out of puberty. She says she thinks she is around 15. The slight young girl is trying to nurse her 11-month-old daughter, Fatima, whose little feet kick impatiently in “Hello Kitty” socks.

Even in a society where injustice for women and girls is a daily fact of life, Nadia’s story is shocking. It reflects the degree to which the legal system in Afghanistan is stacked against females, who often bear the penalty for the crimes of their male counterparts.

Nadia says she was married by force, when she was just 12 or 13, in Kunar province, in northeastern Afghanistan.

Kunar is the center of a rugged and violent area of Afghanistan directly across from Pakistan’s largely lawless Northwest Frontier Province and the Federally Administered Tribal Areas (FATA). The United States tried vainly to pacify Kunar, finally abandoning its posts in the Korengal and Pech Valleys in 2011.

The power of the state is barely felt in Kunar; tribal law holds sway in most of the province, and Nadia was soon caught in its snares. She had little recourse but to acquiesce when her father’s brother decided to wed her to one of his sons.

“My father was sick, he could not even stand up,” she explained. “My uncle came and took me, and married me off to my cousin.”

Nadia lived miserably with her new husband for six months. He was sometimes violent, and she wanted to leave. She developed an affection for another cousin. Too young to really understand the import of what they were doing, the pair eloped.

“We ran away to Kabul,” she said. “We were hiding.” But her new “husband” had to travel a lot. On one of his trips, he ran into his cousin, the brother of the man Nadia had abandoned. The two quarreled, and Nadia’s new husband was killed. His brother then found the murderer, and took his revenge.

Two young men were dead. The killers were cousins, sons of brothers.

The elders in Kunar convened a tribal court, or jirga, to adjudicate the case according to local custom.

The resolution of the affair was complicated by the fact that the fathers of the murdered boys were brothers, and were reluctant to ask for the kinds of compensation usual in such cases — execution of the murderer by a relative of the victim, or ba’ad — awarding a young girl to the victim’s family.

They decided that the killers would not be punished; their crimes were understandable. The real culprit, of course, was Nadia, whose actions provided provocation for the killings. But instead of executing her — an “honor killing” of the type still common here — the tribal courts decided to be merciful. Nadia’s father, after all, had been one of the brothers.

So they called the police and handed her over for the crime of “farar,” or running away. She was several months pregnant at the time, with little Fatima. No mention was made to the authorities about the killings. In a country where most births are never recorded, and in a province where state authorities are unable to take action in any case, it is possible to pretend that the boys never existed.

“No one knows about the murders,” she whispered.

Given her age — she was barely 14 at the time — Nadia was put in the juvenile rehabilitation center.

The girl has been incarcerated for over a year now, and has no idea how much longer she will be forced to stay. The detainees get very little information about their status, unless they are one of the lucky few who come to the attention of a prominent lawyer. “Farar” typically carries a penalty of four to six years.

“I don’t know what I’ll do when I get out,” she said. “I made a mistake. Everybody makes mistakes. Two of my cousins are dead, but I am the one in jail. Is that justice?”

Young Nadia is just one case in Kabul’s Juvenile Rehabilitation Center, which houses a few hundred inmates between the ages of 12 and 16.

Girls and boys are housed in separate wings, with chain-link fences closing them off from each other and from the world. On visiting days, relatives and friends crouch outside the fence, touching hands through the small holes, whispering. Packages of food and other necessities have to be given to the guards to be checked before they can be passed to the inmates.

Journalists hoping to talk to those inside are required to hand over recorders, cameras, even cell phones.

“Do not ask the girls their names,” an administrator admonishes sternly.

Ever since the media broke the story of Gulnaz, a woman imprisoned for immoral conduct after she was raped by her cousin’s husband, prison officials are leery of publicity.

The girls’ building looks a bit like a Soviet dormitory inside; the inmates are housed in blocs, two or three bunk beds and a bathroom in each.

There are no locks on their doors; the detainees can move around the building with relative freedom, but they cannot leave the premises. They are as closely guarded as those in the women’s prison next door.

There are dozens of small children, even here: the juvenile prisoners, some as young as 13, give birth, and, just like in the women’s prison next door, their babies become prisoners as well.

There are no special facilities for the young ones. In Nadia’s bloc there were two children, Fatima and a small baby who slept in a shawl slung like a hammock between two of the beds.

He is the son of Nadia’s roommate, a girl who would not give her name, did not know her age, but was willing to tell her story.

She claimed she had been raped by her cousin — a boy she had liked, but who had forced himself on her when she was about 13.

She told no one, ashamed of what had happened and afraid of the consequences.

Three months later she was feeling sick, and asked her aunt to take her to a doctor. She was pregnant, but, with very little information at her disposal, had not even recognized the symptoms. She was arrested and sent to jail for “zina,” or “moral crimes” — a euphemism for sex outside of marriage.

No one would listen to her protestations of rape, especially since it involved the son of her maternal uncle.

Now she is in the center, shunned by her family, with a six-month old son.

A third girl, with a hard, unyielding face, said she was there for murder. She had killed her husband. When asked why she had done it, she turned her face to the wall, and refused to speak. She appeared to be about 15.

These girls have very little to look forward to. They are taught to read and write, and receive some vocational training. But the beadwork and embroidery they do is not likely to support them once they are released. In most cases, they cannot go home. Nadia has no idea what will happen to her and her daughter once her sentence is up.

“Maybe one of my uncles will take me home,” she sighed, world-weary at 15. “But I don’t know. What is there for me now?”

This is Part Two of a three-part GlobalPost Special Report titled "Life Sentence: Women and Justice in Afghanistan." Read Part Three or return to Part One.