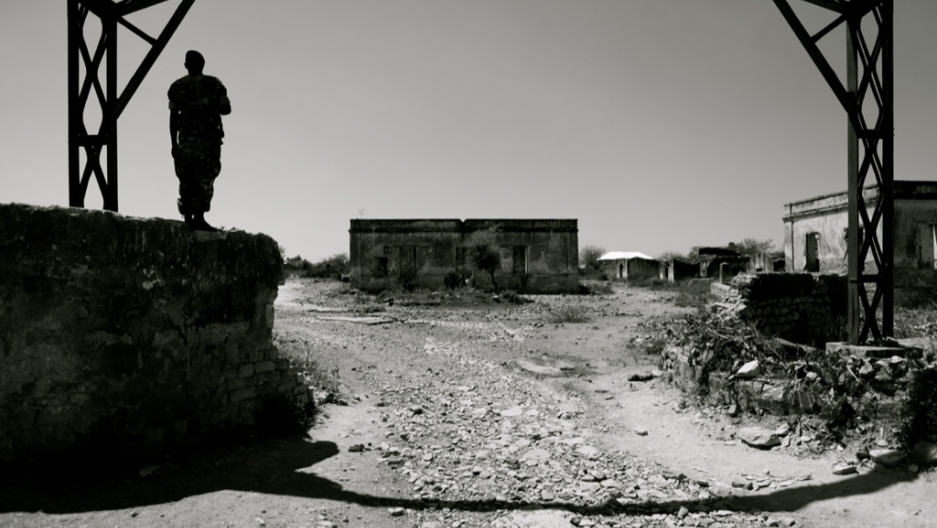 BAIDOA, Somalia — Abdifatah Gessey might be the governor of Somalia's Bay Region, but he had not been able to visit its capital, Baidoa, for three years.

The governor, who wears military fatigues and a floppy camouflage hat  "in solidarity with our soldiers," says he is relieved to be home, and pleased to that the city's life is returning to normal — that is as normal as a city can be under the occupation of foreign troops, in a country that hasn't had a functioning government in more than 20 years.

“If you compare the time of Al Shabaab with now, it is comparing dark to light,” Gessey said.

Although Somalis vigorously rejected the Ethiopian troops when they invaded this city in late 2006, there was little fighting for the inland city this time around. Most of the 300 or so Al Shabaab fighters fled ahead of the Ethiopian forces, whose tanks and artillery — supported by Somali militias aligned with the UN-backed government — outgunned the rebels' "technicals," pickup trucks mounted with machine guns.

The people are tired of war, according to Gessey, but the lack of fight is not a sign that people are ready for civilian politics. "The problem in Somalia is military first, then politics," he said. "Everybody has two hands: one is for fighting, the other for dialogue."

Still, for Al Shabaab, the loss of Baidoa is the latest in a series of setbacks.

Early last year, the group controlled almost all of southern and central Somalia. Today it is losing battles, and ground, on three fronts. It faces Ethiopian troops in western Somalia, the Kenyan army in the south and African Union peacekeepers in the capital, Mogadishu. And US drones target and kill Al Shabaab's top commanders from above.

Al Shabaab is now weak and scattered, according to Brigadier-General Johannes Woldegiorgis, the Ethiopian army commander who led his troops through 10 towns on the 140-mile march from the border to Baidoa, which his troops took on Feb. 22.

"They are history," he said.

The Ethiopians are so confident with their victory that they brought a few journalists to see Baidoa without Al Shabaab.

The Islamic militants have two remaining strongholds: the southern port town of Kismayo and in Afgoye, outside the capital Mogadishu.

The loss of control over the main Bakara and Suuq Baad markets in Mogadishu last August is costing the group $60 million a year in revenues from protection rackets and taxes extorted from businessmen, according to UN investigators.

Territorial losses have deprived Al Shabaab of many of the checkpoints and roadblocks that earned them around $250,000 a month. In February a UN resolution was passed banning the purchase of charcoal exported from Kismayo, a trade worth around $15 million a year to the militants.

“The writing is on the wall for Al Shabaab,” said one observer of the rebels' declining income and loss of territory.

Despite the years of Al Shabaab occupation and decades of conflict which preceded that, Baidoa is intact unlike Mogadishu, a capital that embodies the destructive power of war.

Baidoa is rundown, but not bombed-out. Streets are lined with trees offering shade from the scorching sun, shopfronts are colorfully painted, women in bright headscarves carry firewood or sit by their street stalls. Men in sarongs mingle with the countless rag-tag militia fighters and disciplined Ethiopian soldiers, who keep a wary eye on the town’s inhabitants.

Close to the airstrip, the cluster of government building that Al Shabaab used as their headquarters shows more signs of fighting. Bullet scars fleck the walls, there are ragged tears in the Italianate facades and roofs are collapsing or missing altogether.

This compound offers a rare glimpse of how Al Shabaab lived. It is littered with rusting truck parts and the Ethiopian soldiers who now occupy it found the components of improvised explosive devices scattered in the long grass and dank corners.

The mildewed walls of the main building are covered in Arabic and Somali graffiti. It is a disturbingly violent iconography: childish drawings and engravings of AK-47s and flying bullets celebrate war and killing.

Captain Mahamoud Yissak, an Ethiopian officer, describes the Al Shabaab fighters as brainwashed “kids.” “They only think of jihad,” he said gesturing at a wall of graffiti that featured the jihadist’s black flag.

The last time Ethiopians were stationed in Baidoa, following the 2006 invasion, they were forced to withdraw in the face of popular resistance and attacks by Al Shabaab’s nascent guerilla movement.

“At that time people liked Al Shabaab, there was a lot of support for them,” Yissak said. Back then Ethiopia’s exit was cheered, but three years of harsh rule, violent punishments and crippling taxation soured relations between Al Shabaab and the people.

“Al Shabaab terrorized us,” said Maalim Ali Barre, a clan elder who described the years of militant rule as a “colonization.”

An influential local political leader, Mohamed Habsade, compared Al Shabaab’s impact on Baidoa to “an earthquake” that left the economy in tatters and the people hungry, lacking medical facilities, schools and clean water.

Like the elders, government-aligned militias and other politicians here, Habsade is a member of the Rahanweyn clan; so is Sheikh Mukhtar Robow, the regional Al Shabaab commander and one of its top leaders.

Three years ago Habsade was one of a group of Rahanweyn government officials captured, disarmed and then released by Robow who disobeyed orders to execute them.

Putting clan allegiance above ideology drove a wedge between Robow and Al Shabaab’s leader, Ahmed Abdi Godane, that persists today. Habsade said if Robow comes in peace, he will be welcomed.

Long marginalized, the Rahanweyn clan’s power in Somalia is growing and Habsade indicated that moves were underway to establish a regional administration that could function as part of a federal Somalia, much like Puntland, Galmudug and other regional authorities.

But it remains unclear when local authorities might be free to rule themselves. For now, Ethiopia is clearly in charge.

Dina Mufti, foreign ministry spokesman, said Ethiopia’s troops would leave when Somalia was “stabilized,” but he would not set a time limit on the occupation. Nor would he rule out joining an assault on Kismayo, Al Shabaab’s most important remaining stronghold.