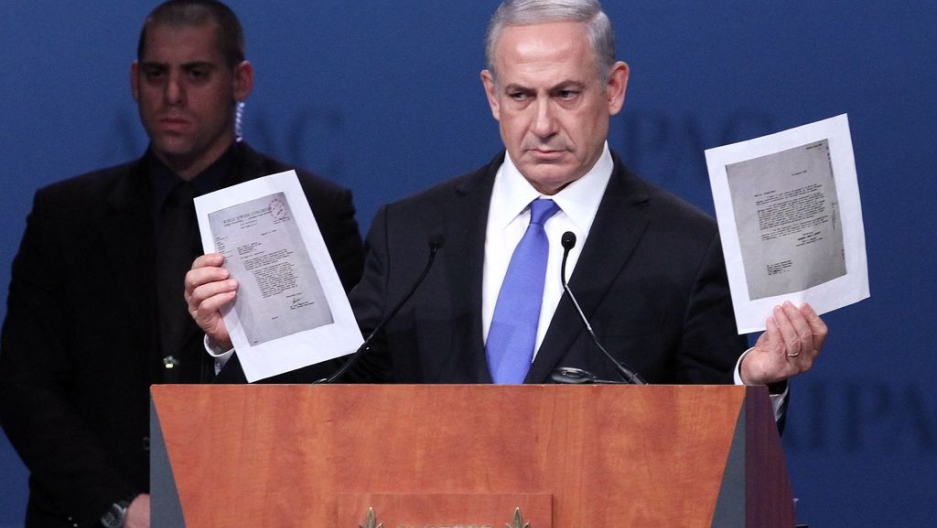 Israeli Prime Minister Benjamin Netanyahu shows copies of WW2 correspondence between the US War Department and Jewish leaders, during his speech to the American-Israeli Public Affairs Committee in Washington, March 5, 2012. The American military refused requests to bomb the Auschwitz concentration camp because it was considered too risky.
Credit: CHRIS KLEPONIS
Share

"I will never let my people live in the shadow of annihilation," Netanyahu said to loud applause from the pro-Israel lobby in Washington, a day after US President Barack Obama warned against "loose talk of war" against Iran.

More from GlobalPost: Little common ground between Netanyahu and Obama

Netanyahu expressed both his conviction that Iran has a nuclear arms program, and his skepticism that its leaders could be persuaded to abandon it.

"Iran claims that it's enriching uranium to develop medical research. Yeah, right," he said. "If it looks like a duck, walks like a duck, and quacks like a duck, then what is it? That's right, it's a duck. But this duck is a nuclear duck and it's time the world started calling a duck a duck.

"Fortunately, President Obama and most world leaders understand that the idea that Iran's goal is not to develop nuclear weapons is ridiculous."

However, as the Guardian pointed out, US intelligence chiefs have repeatedly said that there is reason to doubt whether Tehran has decided to pursue nuclear weapons, and is at least a year from having the capacity to build one.

Yet Netanyahu argued that time was running out.

"Israel has waited patiently for the international community to resolve this issue," he said. "We've waited for diplomacy to work. We've waited for sanctions to work. None of us can afford to wait much longer."

He drew a parallel with the American military's refusal to bomb the Auschwitz concentration camp during World War II, producing a copy of a 1944 letter from the US War Department to the World Jewish Congress in which it argued that the risks of an attack outweighed the benefits.

But in 2012, Netanyahu said, the situation was different:

Never again will the Jewish people be powerless, supplicants for our very fate and survival. Never again. That is why Israel must always have the ability to defend itself, by itself, against any threats. My friends, we deeply appreciate the alliance between our two countries, but when it comes to Israel's survival, we must always remain the masters of our fate.

Liberal Israeli newspaper Haaretz said the speech showed Netanyahu in "war mode." Columnist Chemi Shalev suggested it was intended as a message to Obama, who has argued that diplomacy should be given more time to work before military action is ordered: "Israel won't attack now, but it won't adhere to Obama's timetable either. Israel will give the international community a few more months to achieve the kind of dramatic breakthrough that Netanyahu made crystal clear he does not believe in. Then 'the Jewish state will not allow those seeking our destruction to possess the means to achieve that goal,' no ifs or buts about it."

Meanwhile Netanyahu's strong words are unlikely to change Iran's position, Al Jazeera argued. "Israel has always been public enemy number one in this country and this kind of rhetoric about Iran only serves this establishment's purpose," said Tehran correspondent Dorsa Jabbari. "[Iran] believes this kind of talk will only strengthen their position and actually win over more people in the country in terms of aligning them together in standing united against one enemy."

Iran today said it would allow UN inspectors to visit its Parchin military site, where the International Atomic Energy Agency suspects scientists of testing explosives that could be used in nuclear weapons, the BBC reported. Tehran has also agreed to a new round of talks on its nuclear program with six major world powers.