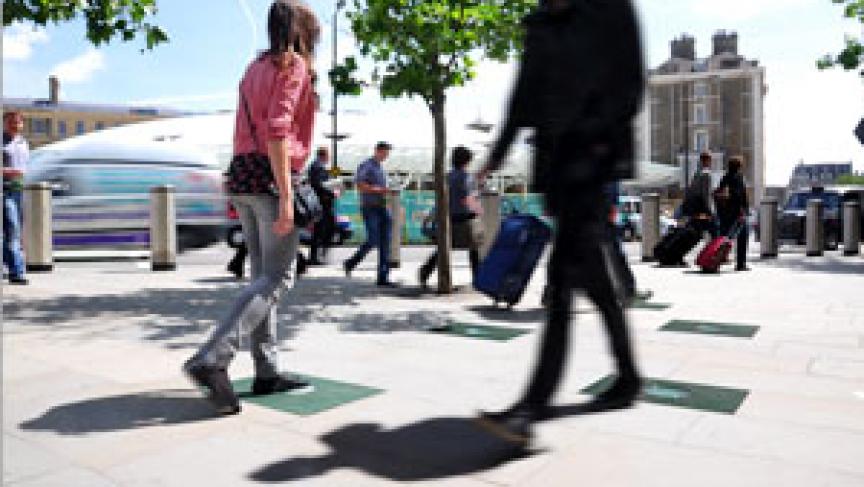 Pavegen tiles embedded into the sidewalk, in green, convert the energy generated by walking on them into electricity. (Photo courtesy of Pavegen.)

Think of the millions of footsteps the average person takes in a lifetime. Now, multiply that by the billions of people on the planet.

That’s a lot of steps.

Consider this: each step produces a brief, but significant, amount of energy. What if there were a way to harness that kinetic energy, and turn it into usable electricity? A British company called Pavegen thinks it has found a way to do just that.

Pavegen’s system is getting field tested in what some might call the roughest of conditions — at the Simon Langton School for Boys in Canterbury, England. Between classes, the halls fill up quickly with students, and their footsteps pound the floor.

There’s a lot of youthful energy in those footsteps. Most of that energy is wasted, just dissipating into the floor tiles. But in one hallway, there’s something new on the ground. It’s a series of special tiles with LED lights in the center of each.

“We’ve got some magical flooring down,” joked Daniel Pledger, a teacher at the Langton school. “It’s pavement which generates energy.”

To emphasize his point, Pledger stamps on a tile. The white LED in the tile glows brightly. Continued stamping lights up rows of LEDs on a nearby educational exhibit.

“Every hour it gets very, very busy in this hallway,” Pledger said. “Over 1,000 students pass through this corridor a number of times a day. So the energy that they create must be incredible. Can you imagine if there were more of these slabs across the school, the energy we could produce?”

Such is the dream of Pavegen, which installed the floor here in Canterbury a little more than a year ago. The London-based company was founded by Laurence Kemball-Cook, who came up with the idea while studying industrial design in college.

Kemball-Cook said he became intrigued by a seemingly simple question.

“A typical person walks over 50 million steps in their lifetime, or something around that level. What if you could take a small amount of energy from every step, that the user wouldn’t notice, and convert that into electricity that could then be used for applications like street lighting?”

And so Kemball-Cook brought a team together and set out to create the Pavegen slab, a rubberized tile that converts footsteps into electricity.

On a small scale, said Kemball-Cook, one day’s worth of foot traffic over a few slabs could power one street light overnight. In another recent field test at a music festival, dancers stomping on a dance floor with Pavegen tiles generated enough energy to recharge their mobile phones.

But Pavegen is setting its sights much bigger than dance floors and school hallways.

“Say there are 4,000 people in a typical office block. They come in the morning, go out for lunch, come back from lunch, and then leave after work,” Kemball-Cook said. “You’re actually looking at a tremendous level of footfall in key entrance areas.”

Of course, the idea of turning human energy into electricity is nothing new. Think of the dynamo on a bicycle tire that powers the lights when you pedal. That technology has been around for decades.

But getting useful amounts of energy from footsteps is a good deal harder.

The challenge is to capture the quickly-released energy of footsteps, store it, and even out the current. After all, you don’t want lights that just flash on and off.

Pavegen seems to have made this work, although exactly how is a closely guarded secret. Kemball-Cook would only say the system involves what’s called piezoelectricity. That’s where a crystal, quartz for instance, will produce a charge if pressure is applied.

Kemball-Cook says the Pavegen’s breakthrough is to make a piezoelectric system produce significant energy from footsteps.

“People say, 'Hold on. Does this work?' ” said Kemball-Cook. “Senior officials from the National Physics Laboratory here in the UK have told us 'We don’t believe it works.' They’ve stood on the product, and seen it, and they said, 'Pavegen, we don’t believe it works, because there’s no way this amount of light could be emitted for this long from one footstep.' And we’re sitting there laughing, smiling, cause we have made it work.”

But not everyone’s been so lucky with piezoelectricity. A few years back, a Dutch company called GreenPeak was working on ways to harvest the energy from clicking a TV remote to, in fact, help power the remote.

“What we really found out is that the energy provision through an energy harvesting device, the way the energy was provided, the profile, is not very useful for electronics,” said Cees Links, GreenPeak’s CEO.

In other words, batteries were still cheaper. But, Links says, he’s intrigued by the idea of Pavegen’s floor slabs.

“The real question is not so much is the technology possible, but is it economically feasible," he said. "In other words, will it be just one interesting project in one place, where somebody thought ‘Hey, this is cool, let’s do it.’ Or will it become mainstream and everybody has it in his yard?”

Those big issues of cost, scale and practicality, are front and center for Pavegen.

For starters, think about what one of the company’s slabs might be subjected to outdoors, under real-life conditions.

“The Pavegen slab is not at the top of a pole, it’s not sitting happily on your roof," said Kemball-Cook. It’s getting trampled on by people every day. It’s going to be flooded. It’s going to be submerged in snow six months out of the year or maybe even more. So you’ve got some really, really big hurdles to overcome there.”

But challenges aside, the promise of cheaper, cleaner electricity through footsteps is an intriguing one.

Pavegen did an installation recently at the World Economic Forum in Davos. The tiles were made from recycled treads from Nike tennis shoes.

But the company’s first big field test will come this summer at the London Olympics. Pavegen will be installing its system just outside the Westfield Stratford Shopping Center, one of Europe’s biggest and busiest urban shopping malls.

Pavegen will place tiles on one of the main pedestrian thoroughfares leading into nearby London Olympic Park. Depending on foot traffic, the company hopes its tiles might be able to power the mall’s entire lighting system.

And with all those Olympic events, Pavegen should get a reality check on the durability of its tiles. The company hopes an average tile will grab the energy of 20 million footsteps before wearing out.