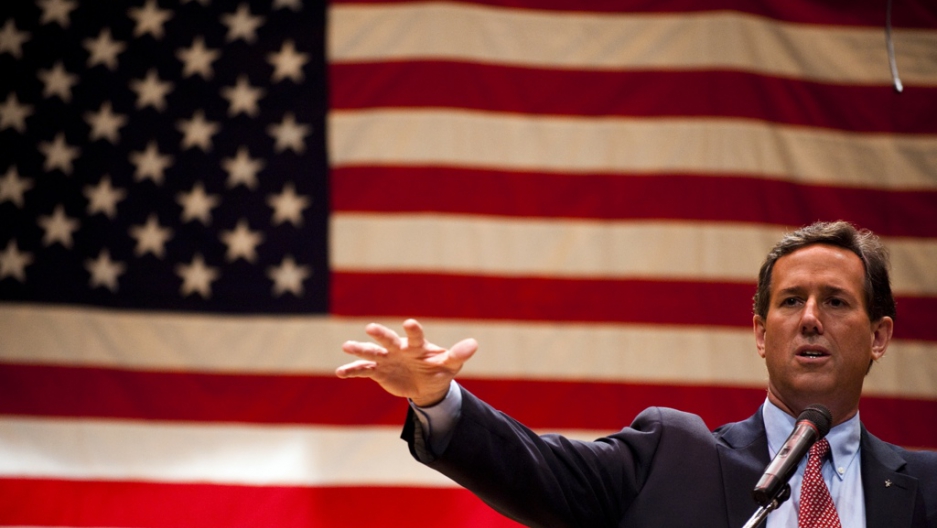 Santorum’s forthright views on topics including gay marriage and abortion have dealt him a surprise strong hand in the race to become the Republican presidential candidate, but his trump card may have been handed to him by Iran’s supreme leader.

When it comes to foreign policy, Santorum is all about Iran and, it seems, very little else. So when leaders in Tehran, as they have in recent months, announce leaps forward in a nuclear program the West fears will produce weapons, Santorum is in his element.

“Rick Santorum has recognized the looming threat of Iran’s nuclear ambitions for nearly a decade,” trumpets the former Pennsylvania senator’s campaign website, in one of numerous articles name-checking the Islamic republic.

It isn’t an idle boast. During his time in office, Santorum had his fingerprints on several pieces of legislation with Iran in the crosshairs, including a 2004, Santorum-sponsored legislation to stiffen sanctions and boost support for the country’s democracy movements.

Another Santorum-authored bill in 2005 targeted anyone with ties to nuclear activities which, he said at the time, “make Iran one of the most pressing national security issues facing the US and the democratic countries of the world."

These long-standing convictions have been heavily mined by Santorum’s camp to shore up the credibility of a candidate who — short of heavyweight financial and political backers and tainted by a 2006 election defeat — could easily be dismissed as an outsider from the right-wing fringe.

And while his sudden emergence as a viable challenger to frontrunner Mitt Romney may be credited to his brash social conservative agenda, his increasingly aggressive stance on Iran is upsetting his rivals’ own election blueprints.

“But because he’s been among the loudest on [Iran] he’s actually pulled Romney across on this and forced Romney away from issues to really sort of pursue rhetoric so that Romney really isn’t setting out a defined foreign policy vision.”

But questions remain over whether Santorum can parlay his increasingly aggressive hyperbole — he now advocates US-backed bombing raids on Iran — into solid foreign policies that deliver votes outside the rarefied atmosphere of the primaries.

This, said Lucas, is something the Republicans are unlikely to face up to despite desires for a candidate who can realize mainstream hopes for a settled period in foreign policy that encourages foreign trade and America’s recovery from the 2008 recession.

“They really don’t want this kind of in-your-face conflict over the Middle East ... but the Republican business and financial establishment are too scared of voter backlash to go out with this message,” the professor added.

“Santorum’s views appeal to red meat Republicans, and this works on a primary, but I don’t think it works with an election,” he said.

As several analysts have pointed out, one of the key traits of Santorum’s foreign policy is its failure to escape the gravitational lure of Iran. The staunch Catholic seems adept at drawing lines between every hot-button foreign issue and his favorite bête noir, the Iranian “Mullahcracy.”

This dates back at least as far as 2006, when Santorum was criticizing President George W. Bush’s failure to escalate his “War on Terror” into a wider struggle against Iran-linked “Islamic fascism” that he said was behind every major modern war.

More from GlobalPost: 3D printing — Your body parts made to order

It also clearly colors his vehement support for Israel, a strategic Middle Eastern ally he says has been woefully undermined by the Obama administration and could be similarly served by his Republican rivals to the extent “there will be no one stronger in this race as a defender of Israel.”

Not surprisingly, given that he views Iran’s leadership as a driving force behind an evolved “War on Terror,” Santorum also opposes Obama’s “politically-motivated” troop withdrawal from Afghanistan where, he says, America must be “squarely focused on succeeding.”

But it isn’t just military conflict. Asked about his policy towards China, Santorum last year spoke of a trade battle that America would win, lumping the communist country’s economic dominance in with a “gathering storm” of security threats to the United States that, inevitably, includes Iran.

Santorum also sees Iran lurking behind Cuba and Venezuela. “It is no surprise that the same Cuban regime that locked hands with the Soviet Union is aligned today with the Islamic Republic of Iran,” he says on his website, separately noting that Venezuelans are “working with jihadists, Iranians.”

Even Santorum’s support of increased aid to Africa — once you get past his goof about Africa being “a country on the brink” — is about cutting off what he sees as Iran’s pervasive influence by “spending money not on our enemies but on folks who will and can be our friends.”

Outside of Israel, Santorum’s hawkish stance is unlikely to win him many friends if he succeeds in taking the candidacy and ousting Obama, according to Lucas. A “jittery” Europe would not support a US president who could trigger conflict not just in Iran but across the Middle East, he argued.

“So Santorum would be seen as a destabilizer, which would be good for an Obama victory, just to be point blank.”