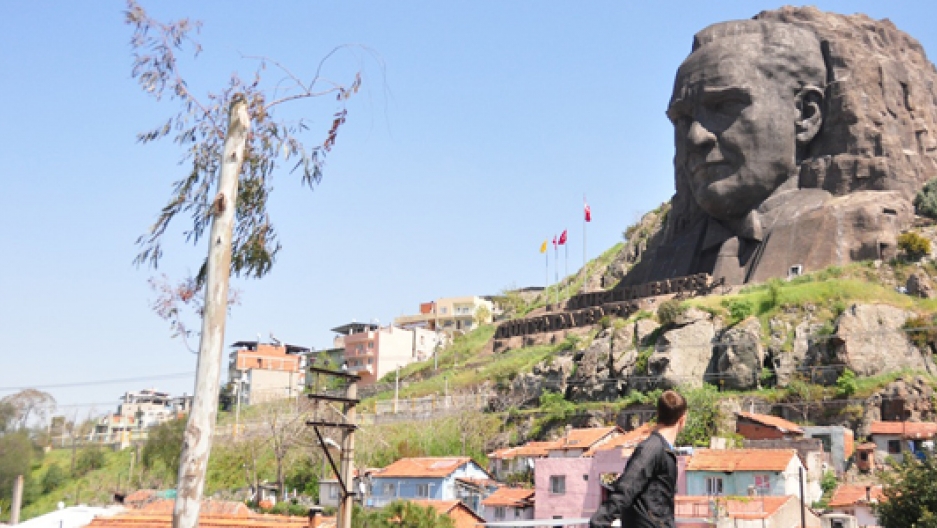 A hillside in Izmir is carved with the likeness of Mustafa Kemal "Ataturk" who founded the modern Republic of Turkey in 1923. (Photo: Andrés Mourenza)

Share
For the Geo Quiz, we are looking for Turkey's third biggest city. It ranks behind Istanbul and the capital Ankara in population. In ancient times, it was a Greek city known as Smyrna. The Ottomans took it over in the 15th century. Today, it is considered Turkey's most European city. Izmir is the answer to the Geo Quiz. The city has gone through many transformations in its long history and part of what it is today was shaped by the Levantines. They were Europeans who settled in the Ottoman Empire centuries ago and the name applies to their descendants who still live in the city today. The center of Izmir is filled with stylish outdoor cafes, giving the place its European feel. Andrew Simes, born and raised in Izmir, is proud to be a Levantine. His mother's family came from Italy, and his father's came 200 years ago from Britain. "My father's side of the family first arrived to build the railways here in Turkey," says Simes. "They worked for that for two generations, and after the railways were complete, they moved on to tobacco, which was a typical Levantine business. And I'm a third-generation tobacco dealer, trying to keep up the family tradition." The Levantines were not your typical immigrants. Generally from the upper, educated and professional classes in Europe, they were lured to the Ottoman Empire with special tax breaks, given control over their own communities, their own police and even their own courts. The Levantines were part of the ethnic mosaic which made the Ottoman Empire multi-cultural — and rich. Izmir was the empire's most cosmopolitan city, with cohesive communities of English, French, Italians, Greeks, Jews, Armenians, and Turks. "You could walk through seven neighborhoods in the space of an hour," Simes says. "But it would be like walking through seven countries, because each neighborhood reflected the architecture, the cuisine, the culture of that community. I've been told from my grandfather, who speaks all those languages, that he'd walk maybe a mile and have to speak three or four languages within that mile because he was walking through three or four communities." The name "Levantine" comes from the French word levant for "rising." It refers to the Europeans, mainly Catholics, who went east where the sun rises, to what was then the Ottoman Empire to seek their fortunes. With services at Saint Johns Cathedral in Turkish, English and Italian, Izmir might seem multi-cultural. And it is to some extent. But locals say it's nothing like it was back in the Ottoman times. Roland Richichi, a Maltese-Levantine industrialist who's active in the community, says Levantines have done a lot for Izmir, which has repaid them well. "Here our great grandfathers made so many things," Richichi says. "Railways, trade, industry, and remain here at Izmir, good weather, sea, sun." But he is pessimistic about the continuation of Christianity in these lands. 'Turkization' has changed what used to be a multi-ethnic Anatolia. He says there are practically no Catholics left. "It's finished," he says. "There is no community; here is the only community which resists." It's not easy either for Fortunato Maresia, an Italian-French Levantine. "I speak eight languages, but I have an accent in each one," says Maresia. Even as modern Turkey glorifies its Ottoman past, there is almost no emphasis on its multi-ethnic character. Instead, the modern Turkish Republic has promoted a narrow idea of "Turkishness." Maresia says he can feel how Turks are forgetting not just the Levantines, but that any one besides ethnic Turks has ever lived here. "The new generation of Turkish is now very surprised when I speak Turkish and say I am Italian," Maresia says. "Because they don't know, the new generation doesn't know this history." Sitting in the outdoor cafe, Simes says special taxes on non-Muslims, ethnic pogroms, Turkish nationalism and an "us vs. them" mentality have pushed the Levantines away. There are some 1000 Levantines remaining in Turkey. "We have barely enough people to survive as a community," Simes says. "The numbers are too small. Honestly I can't see a future, you can say we are the last of the Mohicans here, and we'll be going down in history as a vanished community, it's sad, but it's the truth. I hope we're remembered in a good way." Turkey has become more open to ethnic and religious minorities in recent years, but only after most have dwindled to numbers so small that they are no longer considered a threat.