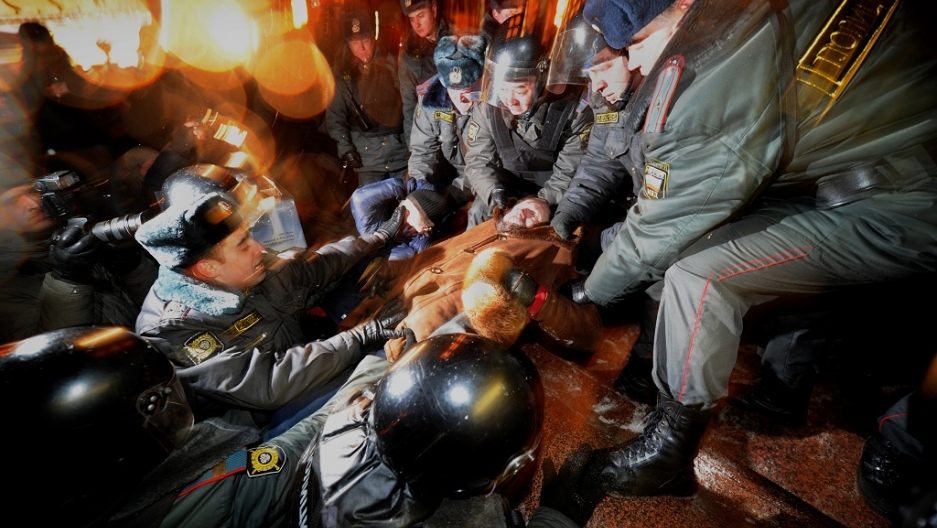 At least 550 people have been arrested in Russia for protesting against Vladimir Putin's historic win of a third term as president this weekend.

The country's opposition denounced the polls as illegitimate, while international monitors said they were skewed, AFP reports.

The LA Times says that 250 people were detained in Moscow, following a rally in Pushkin Square that attracted crowds of between 14,000 and 20,000.

The BBC says that the lawyer and protest leader Alexey Navalny who was among those arrested.

He said in a Twitter message that he was being charged with an administrative offense, but had been allowed to see his lawyer and watch his own arrest on television.

Earlier, Navalny had addressed the rally, saying that "swindlers and thieves" ruled Russia and only the protesters could stop them.

More from GlobalPost: Putin wins again. But did he cheat?

More from GlobalPost: Gorbachev: Putin has "exhausted himself" as Russian leader

A leader of the Solidarity opposition movement, Ilya Yashin, and a radical leader of the Left Front, Sergei Udaltsov, were also detained, according to the The Telegraph.

The newspaper describes "chaotic scenes" as protesters were dragged through the snow into waiting vans.

Elsewhere in Russia, another 300 protesters were arrested in St. Petersburg when they tried to hold a demonstration in St. Isaac’s Square, Newscore reported.

Three journalists and a blogger who were covering the protests were also detained by Russian police, according to the Committee to Protect Journalists.