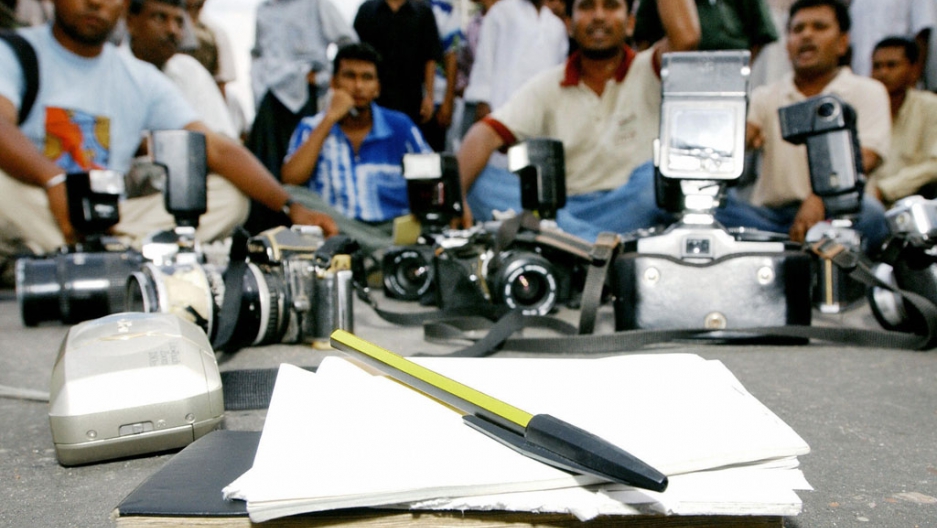 DHAKA, Bangladesh — Megh called his grandmother in the early hours of Feb. 11 to describe an unexpected scene of carnage in his home. The 5-year-old had found both his parents murdered in the next room.

Megh’s parents — Sagar Sarowar and Meherun Runi — were established journalists working for prominent news organizations in the Bangladesh's capital city. Runi had been stabbed five times; her husband fared worse, suffering 28 knife wounds. According to most reports, the only item missing from their apartment was a laptop.

The deaths of Sagar and Runi reflect the increasingly difficult circumstances in which Bangladesh’s local reporters operate: last year one had a bomb thrown into his home.

But in recent weeks, as the foreign correspondent community has been shaken by the deaths of Marie Colvin and others in Syria, Dhaka has seen its foreign media representatives — not just local reporters, who have suffered a climate of initimidation for decades — besieged like never before.

More from GlobalPost: In Bangladesh, some kind of justice

As a long-awaited war crimes tribunal kicks into gear, eight opposition leaders face the possibility of death by hanging for collaborating with the Pakistan army during Bangladesh’s war of independence in 1971.

Covering this trial has led to expat journalists and foreign media outlets being subjected to the intimidation that had previously been reserved for local muckrakers.

On Feb. 12, the country’s media, stunned by Sagar and Runi’s murders, reacted in unified anger on behalf of their slain colleagues and demanded the killers be brought to justice immediately.

Six days later they came together again, but this time it was to attack a colleague. French journalist Nicolas Haque and his broadcaster, Al Jazeera English, had invited an unprecedented assault with the interview of Ghulam Azam's son.

Azam, who was recently arrested, is a defendant in the war crimes tribunal and the leader Jamaat-e-Islami, a political party accused of supporting Islamist terrorism.

Haque's report was condemned for asserting that the potential hanging of eight opposition leaders could cause political instability. Following the airing of the story, articles lambasting Haque and Al Jazeera popped up on the front page of roughly half of Bangladesh’s newspapers.

Al Jazeera has since been evicted from their office space, and Haque says he has noticed people shadowing him while he was out on shoots. The channel has pulled the report from its website.

“The context of the Al Jazeera attacks was significant,” said David Bergman, a British citizen writing for a Bangladeshi daily. “That is, an intelligence agency contacting a lot of media and telling them that the Al Jazeera reporter was in effect a person bribed by the Jamaat doing Jamaat's lobbying deeds.”

Around the same time Bergman, who has lived in Bangladesh for seven years, was facing charges of his own — for being in contempt of court for an article he wrote on the war crimes trial.

Bergman was taken to court for expressing the view that some people feared the tribunal was not following due process.

“The court suggested [Bergman] be cautious while writing and publishing articles on the proceedings of the tribunal,” Priyo News wrote of the Feb. 19 verdict that found his piece to be contemptuous.

The national parliament has since passed a resolution seeking new legislation allowing action to be taken against "those obstructing the war crimes trial," which could potentially censure unfavorable commentary.

The events recall the Bangladeshi government’s campaign last year to oust Nobel Peace Prize laureate Muhammad Yunus from his position as chairman of microcredit pioneer Grameen Bank. The move was heavily criticized by Secretary of State Hillary Clinton, and resulted in a freeze in diplomatic relations that has only recently thawed.

Obscuring the crimes of a bloody past

Most of those standing trial in Bangladesh belong to the party accused of supporting Islamist terrorism, Jamaat-e-Islami. They are charged with committing atrocities including mass rape and genocidal targeting of Hindus during the 1971 war, after which Bangladesh became independent from Pakistan.

The war was brief but brutal. Estimates of the number of Bangladeshis killed in a nine-month period by the Pakistani army and their Bengali collaborators range from 300,000 to the government’s figure of 3 million.

Al Jazeera's Haque is of Bangladeshi origin and is frustrated by his treatment.

“The funny thing,” he said in a phone interview this week, “is that if there was any kind of partisanship on my or David’s part, it would be to try these guys.

“Both my parents were part of the guerilla movement that fought for independence. My grandfather owned several bookshops in the north of Bengal, all of them were burnt down systematically by the Pakistan army’s collaborators,” he added.

The first person to complain to him about bias in his report, says Haque, was actually a Jamaat member who felt it was too much in favor of the trial.

Bergman notes that the atmosphere surrounding the war crimes trial is so sensitive that almost anyone speaking critically of the tribunal immediately gets labeled anti-liberation and pro-Islamist.

“David worked on the first major documentary on this subject, 'The War Crimes File' for [UK’s] Channel 4, almost two decades ago — he really reignited the conversation about war crimes for my generation. To accuse him of being irresponsible in his reporting on the trials displays a short-term memory of convenience and politics,” said a Bangladeshi writer who wished to remain anonymous.

There are accusations of genocide on a scale similar to Bosnia, if not Rwanda — though around the world the ’71 war is perhaps best remembered for inspiring George Harrison’s Concert for Bangladesh.

There is also the delicate, controversial issue of whether Bangladeshis committed war crimes against ethnic Biharis. There are reports of thousands of Bihari men, women, and children being killed during the war, and many of the minority group remain stranded in refugee camps in Dhaka.

Biharis, who are considered to have supported Pakistan in the 1971 war, have traditionally struggled for acceptance in Bangladesh, and covering the subject is taboo among Bangladeshi media.

But the government's moves to control what is said about the trial is distracting international coverage of the tribunal from the atrocities committed during the 1971 war. A successful international PR campaign by Jamaat, which has hired DC lobbyists Cassidy & Associates, isn’t helping either.

So, while many may still wish for clarity and closure to stem from the trials, international coverage has been critical.

Recent headlines in The New York Times read: “A War Crimes Court and a Travesty of Justice” and “Reconciliation or Revenge.” The Economist quipped, “Tried and found wanting” and “War crimes and misdemeanors.”

“The hope, that many of us had, of a tribunal that would be perceived favorably around the world appears to be long gone,” Bergman wrote in a blog post.

Journalists with no protection

The heightened intimidation among journalists in Bangladesh has prompted worries that the media is being co-opted into suppressing itself.

The Bangladeshi constitution guarantees freedom of press, but the reality is different. Social pressure and self-censorship play their part.

A journalist spoke of the ostracism suffered by colleagues who wrote about the touchy subject of wartime violence against Biharis.

“Most journalists do not want to write or say much against the government, be it the war crimes trial or other issues,” said a Dhaka-based reporter, who also asked to remain nameless.

And aside from the aforementioned bill that would prohibit effective criticism of the war crimes trial, a number of laws already in effect make it difficult for journalists to do their job.

The flexible interpretation of contempt of court makes covering the judiciary a murky domain. Reporters can be detained for defamation or sedition, another ambiguous terrain. Harassment, institutional and personal, is common.

Facebook and YouTube censorship is common, and the social media-spurred Arab Spring has made some people nervous. A university lecturer was sentenced to six months in jail this January for Facebook comments he made about the prime minister; later the same month, a 19-year-old student was arrested for an "obscene" Facebook post about the prime minister’s father.

For Haque and some others, these problems are a result of insufficient regulation of the press.

“We need a strong regulatory body that says what we are allowed to do and what we are not allowed to do,” Haque said. “If you have regulations and the government censors you, then at least you can point to that. ... Right now journalists have no protection.”

After the initial outrage, a flurry of rumors cropped up in notoriously gossip-hungry Dhaka about the cause of Runi and Sagar’s deaths. A few lurid tales still circulate, but the theory that seems to be gaining traction is that the couple was killed because they were working to expose illegal land-grabbing by a powerful corporation.

In the meantime, not one of the multiple Bangladeshis interviewed for this article was willing to relinquish anonymity.

“The courts have created a climate of fear around war crimes trials — say anything critical, and you are slapped with a contempt of court hearing. In this way they have temporarily gagged journalists,” said one writer. “I used to be much more unafraid. Now I think so much can go wrong …"