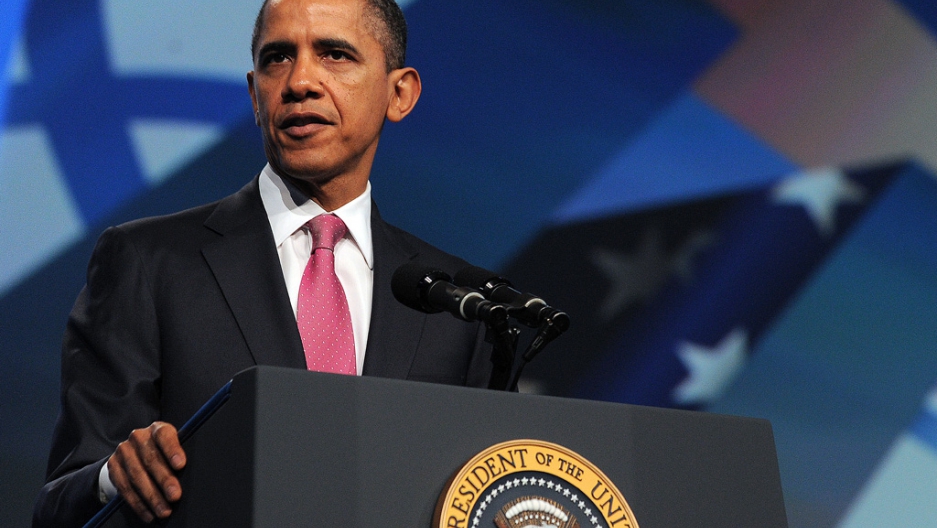 US President Barack Obama speaks at the AIPAC conference at the Washington Convention Center today. Obama warned Iran that he would not hesitate to use force, if required, to stop it developing a nuclear weapon.
Credit: JEWEL SAMAD
Share

Any “loose talk of war” only helps Iran, driving the price of oil higher, President Obama told the pro-Israel US lobby AIPAC in Washington today.

“I firmly believe that an opportunity remains for diplomacy – backed by pressure – to succeed,” Obama said, according to Reuters. “I would ask that we all remember the weightiness of these issues, the stakes involved for Israel, for America, and for the world. Already, there is too much loose talk of war.”

At the same time, however, Obama attempted to remain steadfast in the American relationship with Israel.

He said that if Iran produces a nuclear weapon, the US would respond militarily.

That’s what AIPAC delegates were hoping to hear; they have long pushed for measures outside “containment” through Congress.

Obama said he “will take no option off the table,” including “a military effort to be prepared for any contingency,” The Guardian reported. “I will not hesitate to use force when it is necessary to defend the United States and its interests.”

In Israel, the president’s speech didn’t quell talk of a pre-emptive strike against Iranian nuclear facilities. Israel’s Foreign Minister Avigdor Lieberman said his country reserves the right to defend itself regardless of what its allies are saying.

“We are an independent sovereign state, and at the end of the day, the state of Israel will make the most correct decisions as we understand them,” he said, The Associated Press reported.

Netanyahu and Obama are to meet Monday before the Israeli PM addresses AIPAC delegates later in the day.

Much of the talk is expected to focus on Iran’s nuclear facilities. Iran says it’s researching nuclear technology for medical isotopes and energy. Israel suggests Tehran is pursuing a nuclear weapon.

Netanyahu began his North American visit in Canada on Friday, telling reporters the world shouldn’t fall into a “trap” by dealing just through diplomatic or economic avenues.

“I think there is agreement right now on the main powers that Iran should not be allowed to develop nuclear weapons and that all options should be left on the table in order to assure that that doesn't happen,” Netanyahu said in Ottawa, CBC reported.


More from GlobalPost: How Israel dodged the economic crisis