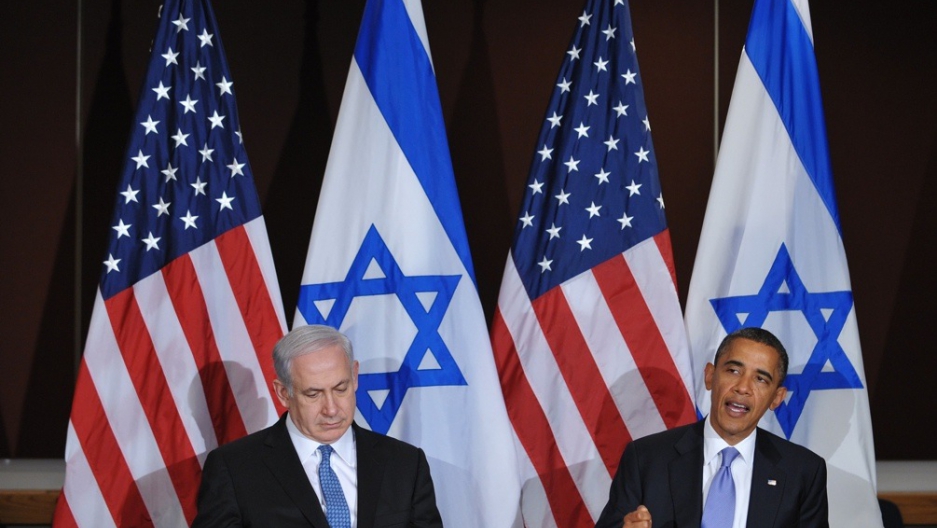 JERUSALEM — It is no secret that there is little love lost between US President Barack Obama and Israeli Prime Minister Benjamin Netanyahu.

After a meeting in Paris last November, not realizing the microphone was still on, French President Nicolas Sarkozy sad he “couldn’t bear” Netanyahu and called him “a liar.” Obama responded: "You're fed up with him, but I have to deal with him even more often than you.”

Netanyahu, for his part, is known to harbor deep skepticism for the president and his agenda. Despite this, analysts on both sides of the Atlantic agree that chemistry, whether good or bad, will have very little to do with Monday’s meeting, the ninth between the two heads of state.

For one thing, they say, the stakes now are just too high. Monday’s summit has one clear goal: to come to a consensus and present a firm and united front to Iran, and the world, regarding Iran’s advances toward military nuclear capability. So far, there has been little agreement between the Israeli and US governments about when a military strike would be necessary to stop Iran from building a nuclear bomb.

More from GlobalPost: US and Israel meet amid rising tensions

“From my own experience I can tell you that there were probably no two heads of state who had worse chemistry than [George H. W. Bush] and Yitzhak Shamir. But when it came to the matter of common interests, all this bad chemistry turned into very good physics,” said Zalmon Shoval, a former Israeli ambassador to Washington and senior member of Netanyahu’s Likud party.

Ahead of the summit, Obama appears to be trying to bridge the gap that divides the two leaders and to begin presenting a united front. In an interview with The Atlantic magazine published on Friday, Obama went further than ever before in threatening Iran with military action if there appears to be no other way to stop it from acquiring nuclear weapons.

“I think that the Israeli government recognizes that, as president of the United States, I don't bluff. I also don't, as a matter of sound policy, go around advertising exactly what our intentions are. But I think both the Iranian and the Israeli governments recognize that when the United States says it is unacceptable for Iran to have a nuclear weapon, we mean what we say,” Obama told The Atlantic.

Even if Israel were not in the picture, Obama added, “It would still be a profound national-security interest of the United States to prevent Iran from getting a nuclear weapon.”

There is a near consensus among analysts close to the two governments that this summit will be the most important meeting the two men have ever held. For the first time, though, the subject that has strained their relations almost to the breaking point — the Israeli-Palestinian peace process — will not be on the agenda. On that point, Netanyahu won. Despite Obama and Secretary of State Hillary Clinton’s continued insistence during the course of the last three years, Netanyahu has failed to make any substantial moves toward renewing peace negotiations with the Palestinians.

“Obviously, this is not only going to be a very important meeting, but the issue at hand is so important that even if there is bad chemistry in the background, it will not come to the fore, not even in private,” Shoval said.

More from GlobalPost: Has the war with Iran already begun?

The critical divide the two need to address concerns when the Iranians reach a “point of no return.” Israel is determined to prevent Iran from achieving nuclear capability. The United States appears willing to give economic sanctions more time to accomplish their goal — to force Iran to set aside its nuclear ambitions and enter negotiations with the West in order to assure its own survival.

Israel fears that while the West waits and watches, Iran will have reached the tipping point.

Using Netanyahu’s nickname, Aaron David Miller, a distinguished scholar at the Woodrow Wilson International Center for Scholars and a former adviser on the Middle East to both republican and democratic secretaries of state, said both leaders hoped to achieve two very different things at the summit.

“Bibi would like to get a green light from Obama or at least latitude to strike Iran’s nuclear sites if he deems it necessary and he won’t get one. And Obama wants a red light, meaning Netanyahu’s commitment to give the sanctions more time, and he also won’t get it. This meeting is about what they can agree on between those two lights.” Miller said.

There is a widespread assumption, meanwhile, that Netanyahu and Obama dislike each other personally and have been frustrated by the other’s intransigence on the peace front.

In The Atlantic interview, Obama for the first time addressed his relationship with the Israeli prime minister. Asked if they formed a “dysfunctional” pair, Obama said, “I actually think the relationship is very functional, and the proof of the pudding is in the eating. The fact of the matter is, we've gotten a lot of business done with Israel over the last three years.”

Asked if there is any personal warmth in the relationship, the president replied, “You know, the truth of the matter is, both of us have so much on our plates that there's not always a lot of time to have discussions beyond business.”

Miller said the two men simply can't afford to let any personal differences come between them in this case. There is too much “mutual interest,” he said, to let those differences get in the way.

Shoval said he believes the Iranian threat can be successfully met, but said any Israeli prime minister carries an added burden — the weight of Jewish history itself.

“For Obama, this is an incredibly delicate moment, politically. But for Netanyahu, it goes beyond politics. Netanyahu is convinced not only of the severity of the threat but also that he has in his hands both Israel and the Jewish people.”

“Every Israeli prime minister sees himself —not officially, but in substance — as the leader of the Jewish people everywhere, whether they acknowledge him or not. This is a sense that permeates Bibi. To his credit, if the world today has a different view toward the Iranian nuclear threat, it is in no small measure thanks to his consistent and logical and persistent mention of Iran.”

Addressing this question in The Atlantic, and issuing Israel a clear warning against unilateral action, Obama said, “The prime minister is head of a modern state that is mindful of the profound costs of any military action, and in our consultations with the Israeli government, I think they take those costs, and potential unintended consequences, very seriously.”