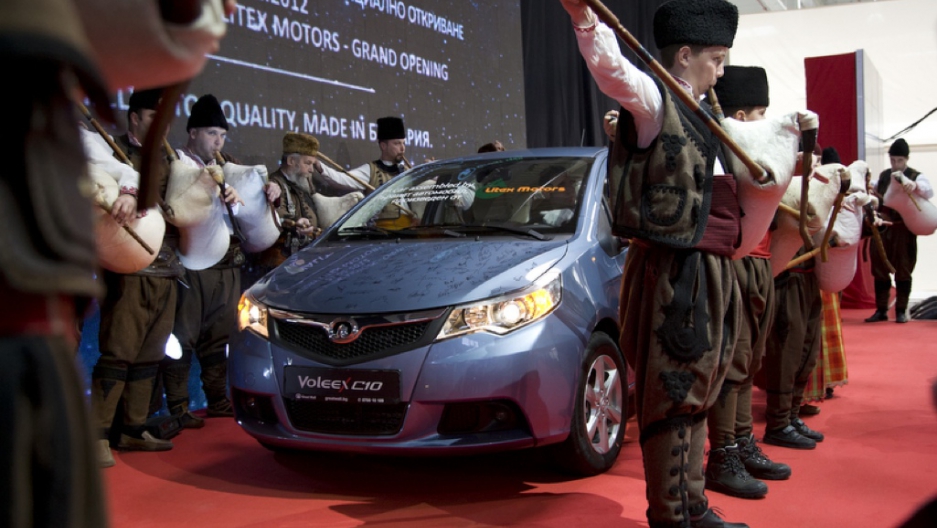 SOFIA, Bulgaria — There was an unusual display outside the city’s National Palace of Culture recently: a brand-new silver SUV, encased in a glass box and stamped with the words "Made in Lovech" — Bulgaria.

The Great Wall Hover was one of the first cars to roll off the assembly line at a new plant built by Great Wall Motors, one of China’s major car manufacturers, in association with the Bulgarian firm Litex. A celebration was held last week for the opening of the assembly plant about 90 miles east of Sofia.

This is China’s first major foray into car manufacturing in Europe. If Great Wall Motors succeeds, it will gain a much-coveted foothold in the European market.

Other Chinese companies in the past have failed to meet stringent European safety standards. Great Wall Motors is the first Chinese auto manufacturer to have passed the European NCAP safety test, according to Bill Russo, a China auto-industry expert and former executive for Chrysler’s North East Asia division.

More from GlobalPost: US beats China in vehicle sales growth in 2011

By assembling cars in the poorest EU countries, Great Wall Motors can ensure a ready and cheap labor supply while avoiding EU import taxes for its cars.

The new plant is located in an industrial zone outside the tumbledown village of Bahovitsa, population 1,100, where ordinary traffic consists of elderly pedestrians out to tend to their chickens, children riding bicycles and locals driving Soviet-era Lada automobiles.

“Probably a lot of people were doubting in such a place there could be such a company, the only factory of its kind in Bulgaria,” said Iliya Terziev, the executive director of Litex Motors.

This year, the plant will roll out only 2,000 cars. But Terziev said that he hopes the plant will be able to produce 50,000 cars annually when it’s running at full capacity in the next three or four years.

Great Wall Motors in cooperation with Litex will assemble three models in Bulgaria, beginning with a Voleex C-10, a small, five-door hatchback that will sell for about $11,000. The following year, Great Wall will also begin distributing two other models: a pickup truck called Steed and the Hover SUV at $20,000 — about $6,500 cheaper than popular SUVs like the Japanese Suburu Forester.

More from GlobalPost: US autoindustry expects profits in 2012

Great Wall has so far hired 120 workers, and expects to hire up to 2,000 more as production ramps up.

Atanas Novakov, 26, a recent graduate from Sofia Technical University, was hired last year and has worked his way up to team leader.

Brain-drain has plagued Bulgaria for the last decade, due to the fact that there aren’t many good jobs in Bulgaria for college graduates. “This is a great opportunity for guys like me, and very special for Bulgaria,” he said.

Launching an overseas operation in the midst of the European economic crisis is a risk.

In order to win, Great Wall will have to undercut competitors on price, Russo said. The Voleex C-10 will be priced a few thousand dollars less than the similarly styled Toyota Yaris.

Great Wall has also cleared another competitive hurdle for Chinese car manufacturers. Because it can cost about a billion dollars design a car, many Chinese manufacturers started out copying models from rival companies.

Early on, some of Great Wall’s models have looked very similar to competitor’s vehicles, most notably in the 2006 case of Great Wall’s Peri, which Fiat accused of being a copy of its own Panda. An Italian court subsequently banned the Peri from being imported to Italy.

Great Wall now exports only models of unique design, which it has been doing successfully in many countries, notably Italy, Australia and the Ukraine, with help from an Italian design firm.

Meanwhile, in Bahovitsa, Kalin Krastev, the young, recently elected mayor, said that residents have generally responded positively to the plant. But they will be more receptive, Krastev said, when more jobs become available.

That’s what’s been promised, he said, but “how soon, they won’t say.”

Krastev has been driving a Great Wall truck — a loaner from the company — but probably wouldn’t buy one just now, he said, due to the high cost of gas and low wages, especially for civil servants. “They are not that expensive, but we are in Bulgaria.”