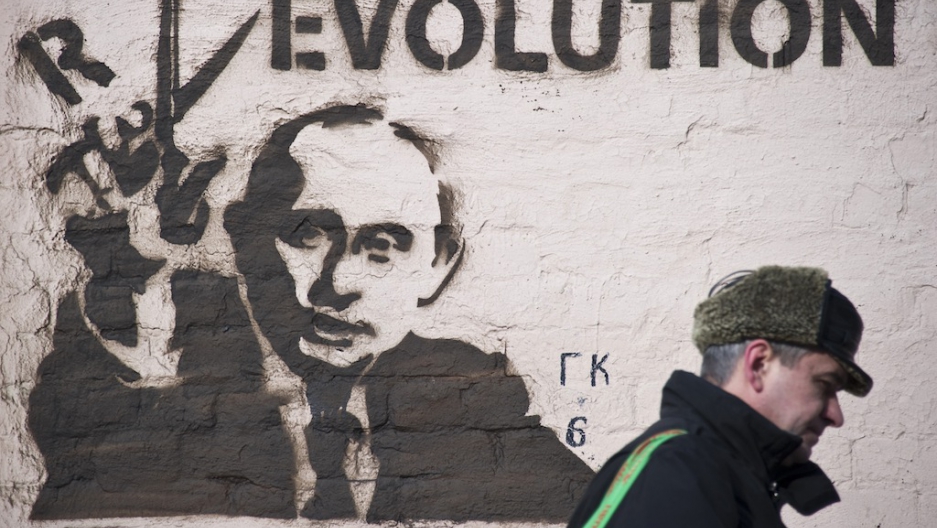 In Moscow on March 3, 2012, a man walks past a wall painted with graffiti, featuring Russia's Prime Minister and presidential candidate, Vladimir Putin. Tomorrow, voters will likely send Putin back to the Kremlin for his third presidential term.
Credit: John MacDougall
Share

“Who is Vladimir Putin?” was the first significant geo-political question of the new millennium. Back then, few knew the man who had been picked out of obscurity and placed on Russia’s throne.

It was December 31, 1999 and the world thought Y2K would kick off the apocalypse. But a forlorn Boris Nikolayevich Yeltsin resigned, and the world got President Vladimir Putin instead.

Now, on the eve of Russia’s presidential election, the question remains.

Two stock images of Putin dominate the public sphere: the thuggish dictator who hijacked a burgeoning democracy, and the macho savior of a nation. Both personas were articulated at recent political rallies.

On Dec. 10, anti-Putin demonstrations were held in Moscow and other cities throughout Russia. Russia took to the streets in unprecedented numbers — at least not since the fall of the Soviet Union. Tens of thousands shouted slogans like, “Freedom,” and “Russia without Putin!”

Accusations of widespread fraud in December’s parliamentary elections precipitated the mass dissent. Protesters are tired of Putin’s “managed democracy” and its attendant years of political corruption.

Yet, at a pro-Putin rally on Feb. 23, an estimated 130,000 Russians in a 78,000 capacity football stadium, cheered when Putin predicted, “We will be victorious.” The Toronto Sun reported many were “paid to attend or were coerced by their bosses.”

At the rally, with his signature militaristic rhetoric, Putin recalled Napoleon Bonaparte’s failed 1812 invasion of Russia. He compared his political opponents to the French invaders, and himself to the stalwart defenders of Mother Russia.

More from GlobalPost: Did Putin make up that assassination plot to get votes?

Everyone knows the safe money is on a Putin victory. Three out of four of his opponents have lost a presidential election before, and their polling numbers are paltry. According to an independent poll conducted by the Levada Center, Putin should win with over 60 percent of the vote.

This statistic suggests voters are willing to exchange a few civil rights for comfort and consistency.

In Putin’s eight years as president, (2000-2008) Russia's economy grew an average 7 percent a year, real disposable income doubled, and living standards consistently increased. With the reigns of oil and nationalism Putin pulled Russia out of economic turmoil and set the country on its current path.

But as the recent anti-Putin rallies also suggest—surprisingly sustained in Russia’s unforgiving winters—an increasing number of voters want to break their social contract with Putin. Many no longer see him as Russia’s infallible leader.

The now famous, self-aggrandizing photos of Putin illustrate the point.

These pictures tend to elicit two antithetical reactions: laughter and awe. Some find the images of Putin saving a TV crew from a Serbian tiger, aiming a really big hand gun, and straddling a horse half-naked consistent with his larger than life heroic status. Others see them as propaganda that has morphed into an unintended satire of publicity stunts.

But no matter how Putin is perceived, it’s clear he’s lost a valuable political asset—his anonymity. It was his unknown character that enabled his meteoric ascent to power in 2000, not his political skill, iron fist, or bulging biceps.

More from GlobalPost: Putin to dominate the vote, whether it's fair or not

In 1999, a haggard, often drunk, and unpopular President Yeltsin picked Putin as his successor to save himself from prosecution by his political opponents. The way Moscow journalist Masha Gessen tells it in her new book, “The Man Without A Face: The Unlikely Rise of Vladimir Putin,” Putin was chosen, as the book’s title implies, because no one knew who he was—just a blank slate voters could project their hopes and dreams onto.

It also helped that Putin was introduced to the Russian public at the perfect time—during a national crisis. As acting president he won with 53 percent of the 2000 vote, his opponents earning between 1 and 29 percent.

In 2004 he won again, this time with a suspiciously high 71 percent (the same percentage his hand-picked replacement, Dmitry Medvedev, won in 2008).

But now the world knows a few things about Vladimir Vladimirovich Putin.

For example, how he prefaced a marriage proposal to his wife, Lyudmila, by saying, “I am basically not a very convenient person.” He stole a Super Bowl ring from the New England Patriots. And there’s the long list of journalists, businessmen, and politicians he may or may not have ushered into an untimely grave.

Add all that to, as Oliver Bullough points out in his recent article for the New Statesman, Russia’s widespread alcoholism, demographic issues, an economy perilously tethered to oil, and internationally unpopular support of Syria’s Bashar al-Assad. It's a very different Russia and a very different Putin.

Perhaps Putin's 1812 Napoleon reference wasn’t the best analogy. After all, it was Napoleon’s obstinacy, his inability to adjust to a new Russian landscape, that led to his demise.