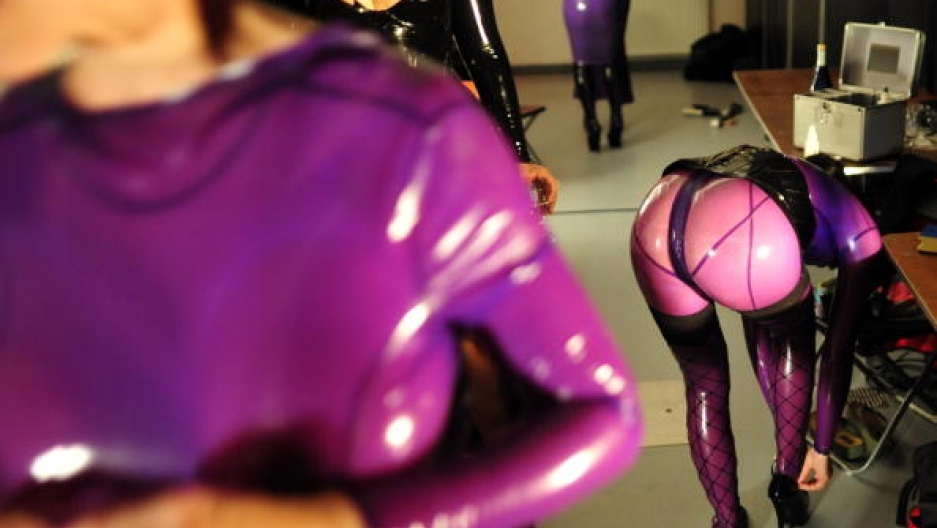 It's never too cold for latex. Here, in Hamburg, Germany, Members of the Rubbersisters prepare for the Rubberdoll-Contest at the Latexpo 2010. Rubberdolls are mostly men wearing a female body shaped suit and dressed in rubber or other fetish related dresses.
Credit: Patrick Lux
Share

In my defense, it wasn’t my idea.

I am in Prague this week and a friend told me I should come to “this party” where he’d be DJ-ing.

But after I looked up the venue, I noticed what the party was called:

“Fetish Underground Party,” with a sub-headline “Dress the F*ck Up.”

Comments and inquiries about the party included questions such as: “Isn’t it going to be too cold for latex?”

So I emailed my friend.

You didn’t mention it was a fetish party. Do I seriously need to dress the f*ck up?

He replied something close to this:

So, I spent most of Thursday afternoon – instead of working, I might add – putting together my S&M outfit.

So how did it go?

The party was actually pretty mellow.

You know, the usual: people in latex, people dressed up as animals, people with plastic bags over their heads, people in wetsuits of sorts, people dressed head-to-toe in polka dots. (Okay, this was one of my friends. She is convinced there must be a polka dot fetish out there. Polkadotphilia, to be technical about the condition.)

There were also many other weird creatures watching a burlesque show, a lingerie fashion show and dancing to Lady Gaga. To be perfectly honest, most of the people there actually looked a lot like Lady Gaga, which isn’t all that surprising.

I was, however, surprised by the wide variety of of paraphilia on display – objects, situations, or individuals that create sexual arousal in perfectly normal looking people – that exist in the fetish subculture.

Did you know, for example, that the source of arousal for some is vomit? That would be "emetophilia."

Dacryphilia is also interesting. It’s having a thing for crying.

And, my favorite, "forniphilia," for those who get excited by turning a human being into a piece of furniture. For the next party, I am dressing up as a bar stool.

Other than delving into the different kinds of fetishes, it turned out to be a pretty straight-laced event.

Aside from the guy who dressed up as a horse, of course. And the wolf guy. And the topless woman with the gigantic silicone breasts, making all the mammaphiles out there extremely happy.

In other words, it was a dull night for emetophiles.