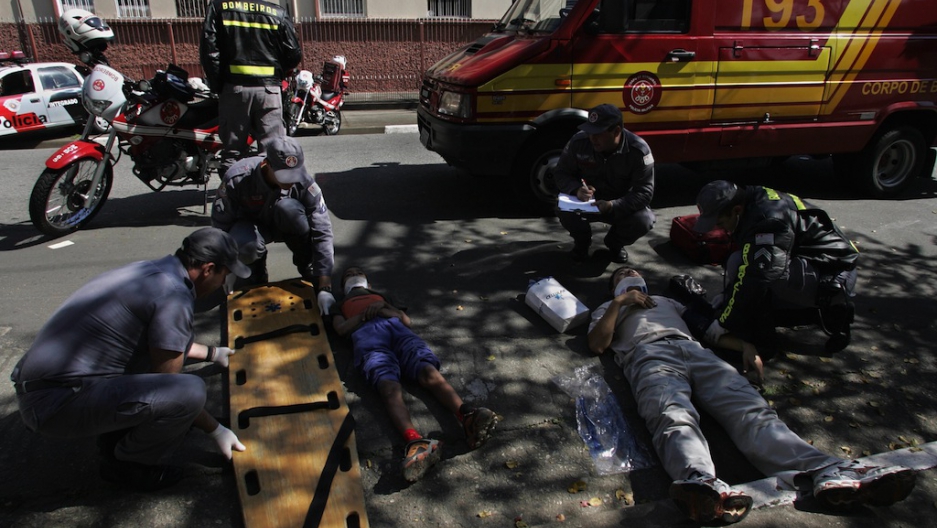 Members of a fireman's rescue brigade prepare a couple of young boys for evacuation after they suffered a bicycle accident near a checkpoint in downtown São Paulo, Brazil, May 19, 2006.
Credit: Mauricio Lima
Share

The accident occurred at 9:50 a.m. local time, reported Brazil's R7 Notícias. Dias died at the scene after a bus ran her over, crushing her skull.

According to witnesses, Dias, a biologist who worked at Sírio-Libanês Hospital, was riding her bike on the right hand side of the street in the lane designated for buses when the accident took place, reported Globo TV's news site G1. One witness, who was waiting to cross the street with many others, said Dias was arguing with a bus driver when she raised one of her hands to complain, lost her balance and fell. The wheel of another bus then went over Dias. The witness said the driver of the bus tried to help, but she had already died.

According to Terra, a group of cyclists protested on Avenida Paulista only hours after the accident, laying down with their bikes in the same busy intersection. Another group of cyclists began their protest at 7 p.m., reported Brazil's iG, in the city's Praça do Ciclista (Cyclist Square).

The news site also reported that cycling activist Márcia Regina de Andrade Prado, 40, was killed on Avenida Paulista as well when she was run over by a bus in January 2009. A memorial was erected in her honor in the region.