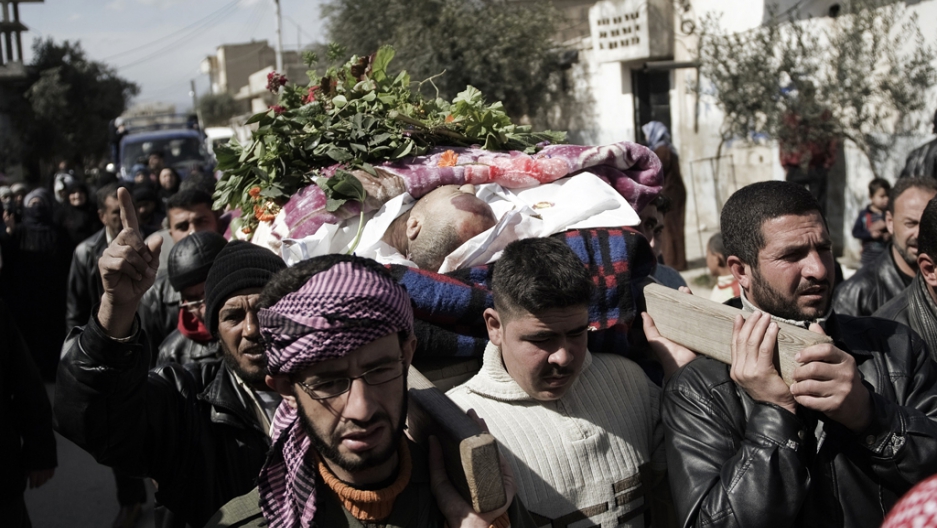 Syrian mourners carry the body of a man who was killed by a shrapnel during his funeral in Qusayr, 15 kms (nine miles) from Homs, on February 28, 2012. Leaders meeting at the European Union summit on March 2, 2012, called upon the Syrian government to end the violence, with British Prime Minister David Cameron saying that the authorities would face "a day of reckoning."
Credit: GIANLUIGI GUERCIA
Share

British Prime Minister David Cameron warned supporters of Syrian President Bashar Assad of a “day of reckoning” while calling for the Syrian leader to be tried for war crimes, according to the BBC.

Speaking in Brussels on Friday, after the European Union summit, Cameron said, “The Assad regime is butchering its own people. The history of Homs is being written in the blood of its citizens.”

Cameron reiterated, “It is very important that we set out the war crimes that effectively are being committed, that we write them down, we take the photographic evidence, we bring it together and ... make sure that the day of reckoning will come,” according to the Associated Press.

Russian Prime Minister Vladimir Putin said his country had no special relationship with the Syrian government, and accused the west of fueling the conflict instead of calling for talks, according to the Guardian. Putin put distance between himself and the Assad regime, saying, “It is up to the Syrians to decide who should run their country … We need to make sure they stop killing each other.”

Russian spokesman for the foreign ministry, Alexander Lukashevich, said that Russia would not provide Syria with any military assistance if there was a foreign intervention. Both Russia and China backed a UN Security Council resolution which expressed “deep disappointment” that Syria did not allow UN humanitarian chief Baroness Valerie Amos into the country. This marked a turnaround from when the two countries vetoed a previous Security Council resolution on the crisis.

The EU leaders released a statement calling “once more on all members of the United Nations Security Council, particularly Russia and China, to work together in an effort to stop the violence,” said the AP.

French President Nicolas Sarkozy said that 8,000 people have been killed in the city of Homs, and also announced the closure of the French embassy in Damascus.

More on GlobalPost: Germany battles over the future of solar energy

In an interview with The Atlantic, President Barack Obama said, “It is our estimation that [Assad's] days are numbered. It's a matter not of if, but when. Now, can we accelerate that? We're working with the world community to try to do that.”

Watch Cameron's remarks to reporters and at the summit, courtesy of the AP: