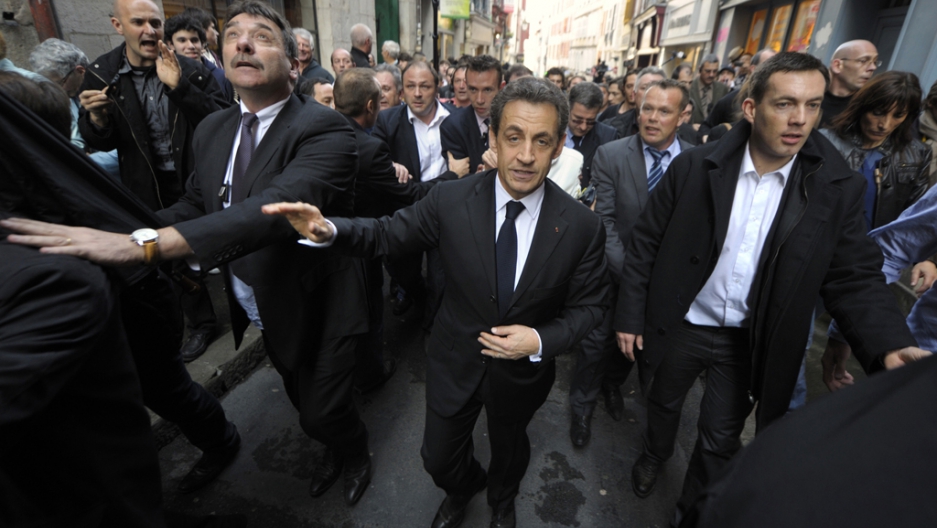 France's President and Union for a Popular Movement (UMP) party candidate for 2012 presidential election Nicolas Sarkozy (C) walks surrounded by bodyguards in a street of Bayonne during his campaign visit on March 01, 2012 in the Basque country, southwestern France.
Credit: -
Share

French President Nicolas Sarkozy sought refuge in a cafe after a crowd of angry protesters, several hundred strong, booed at him, said the Associated Press.

Sarkozy was campaigning in France's Basque country, in the southwest. Riot police surrounded the cafe where Sarkozy took refuge, and he denounced "the violence of a minority and their unacceptable behavior."

Reuters called the crowd "left-wing militants" and Basque separatists, and said they threw "scrunched up political tracts" at him as he visited the city of Bayonne. Some reportedly threw eggs at the windows of the bar where he sought refuge.

The Christian Science Monitor reported that polls showed Sarkozy gaining four points on his socialist party rival François Hollande. Reports suggested the two are now virtually tied for the first round of the French presidential elections, although Hollande still holds an 11-point lead for the second round, scheduled for May 5.

More on GlobalPost: Germany battles over the future of solar energy

The video, which GlobalPost has not been able to verify, shows the crowd booing as Sarkozy exits his car: