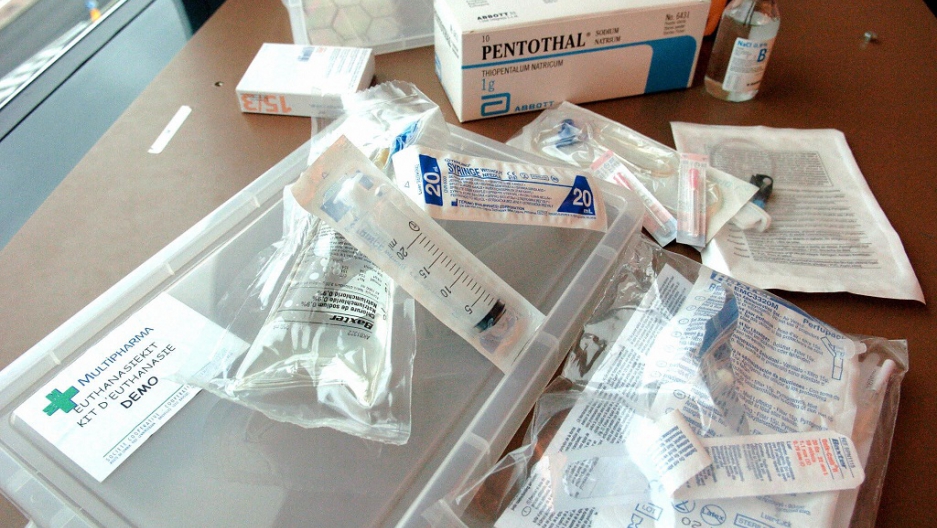 This picture taken in April 2005 shows a euthanasia kit available in Belgian pharmacies for general practitioners who want to practise euthanasia at patients' homes. Now patients in the Netherlands will have access to a specialised mobile euthanasia unit it they satisfy strict criteria.
Credit: ETIENNE ANSOTTE
Share

A mobile euthanasia clinic will begin operating in the Netherlands on Thursday, to assist patients' whose own doctors refuse to carry out the procedure.

According to the AFP news agency, the the Levenseindekliniek (Life-end clinic) has prepared several teams made up of a specially-trained doctor and nurse to attend to patients in their homes.

"People who think they comply with the criteria for euthanasia can register," the Right To Die Netherlands (NVVE) spokeswoman Walburg de Jong is quoted as saying.

"If they comply, the teams will carry out the euthanasia at patients' homes should their normal doctors refuse to help them."

The Netherlands became the first country in the world to legalize euthanasia, when it approved the Termination of Life on Request and Assisted Suicide Act in 2002.  The Act outlines strict criteria, including that the patient must be mentally alert when making the request to die and be in a state of "unbearable and hopeless suffering".

In 2010, the number of reported euthanasia cases in the Netherlands rose 19 per cent to 3,136, the Guardian reported.

THE NVVE says it expects to receive around 1,000 assisted suicides requests per year, and has already been contacted by 70 potential patients since the plan was approved in early February.

The Federation of Dutch Physicians has expressed concerns about the units and says it fears the teams may end the lives of people who could be treated.

‘In the worst cases, people could die who perhaps could have received some other help,’ a spokesman is quoted as saying by the Daily Mail.

More from GlobalPost: Xerox series: Your body parts, made to order