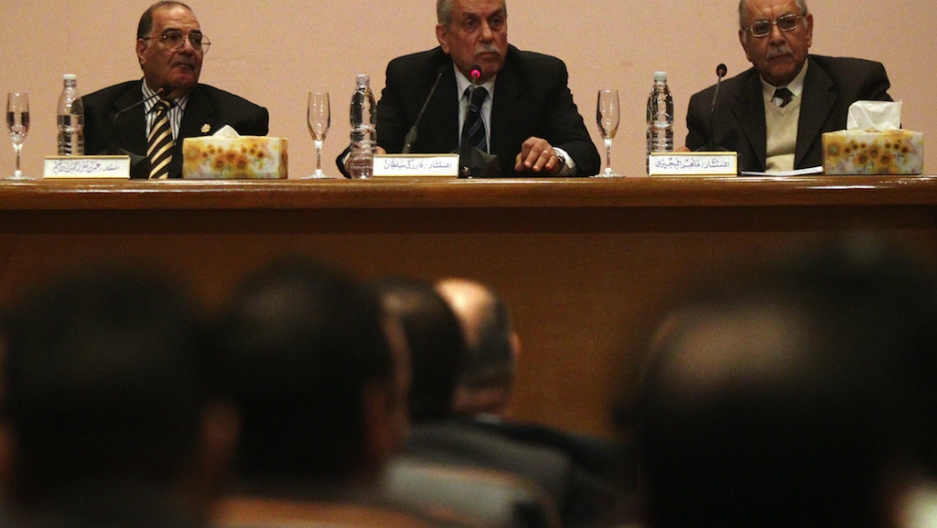 Picture showing Faruq Sultan, Chairman of the Supreme Constitutional Court of Egypt, the highest judicial court in Egypt. Whether or not Egypt's judiciary is independent from the executive branch is still a matter of debate.
Credit: KHALED DESOUKI
Share

CAIRO, Egypt – It’s a crucial question for post-Mubarak Egypt, where an uprising was meant to remake the system as one rooted in the rule of law – and a high-profile case against US-funded NGOs is being touted by ruling military figures as the work of autonomous judiciary.

The level of judicial independence in Egypt has fluctuated over the years, rising enough at some points to spook the Mubarak regime, and dipping so low as to uphold the state’s right to torture.

It’s difficult to argue that any judiciary could maintain its sovereignty when a military junta is at the helm – whether in ruling for or against oppressive practices.

Those at the forefront of the recent campaign to try pro-democracy NGOs like Freedom House, the National Democratic Institute, and the International Republic Institute, have maintained that the public prosecutor is acting on its own, free from political meddling.

Read more from GlobalPost: Egypt: Americans could face jail time... for having maps

But the reported lifting yesterday of a travel ban on the foreigners charged for their involvement with these NGOs by a Cairo appeals court suggests otherwise.

Secretary of State Hillary Clinton had hinted Tuesday that the US was “moving toward a resolution” of the NGO crisis, which may have included a political and diplomatic deal with Egypt’s ruling generals.

Three of the case’s presiding judges recused themselves from the trial also Tuesday, without giving explanation but amid speculation the Supreme Council of Armed Forces (SCAF) intervened to halt the prosecution of Americans in an Egyptian court.

It’s still unclear whether the judges were unsure of the legal merits of the case or if they objected to political interference on principle.

One judge not involved in the case, deputy head of the appeals court in Egypt's Ismailia governorate, Ashraf Zahran, said the judges stepped aside because of "the intervention of the authorities in the work of judges." He was speaking on a local popular television program "The Truth."

Mahmoud Al Sherif, spokesman for the Judges Club, a judicial advocacy group, said the withdrawl of the judges from the case was a "positive" step because "it means that Egypt's judiciary is still independent and resolute on being separate from the executive branch."

“…there are signs that Egyptians' reaction will be to think (no matter what they think of the merits of the case) that all the talk about their judicial system being above political influence being total bullshit.”

Nathan Brown of the DC-based Carnegie Endowment for International Peace recently gave an excellent run-down of the Egyptian judiciary’s battle for independence.