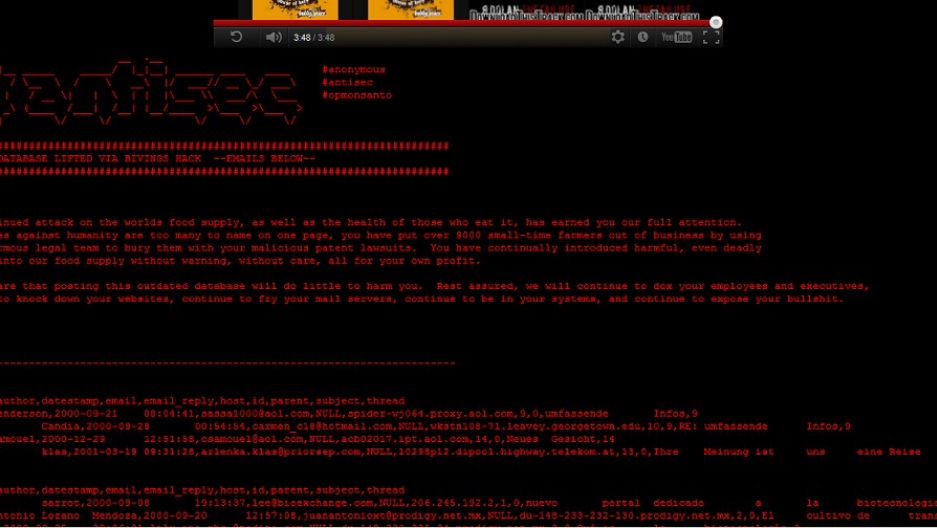 In an attack on Monsanto, the multinational agricultural biotech corporation, Anonymous released a lengthy list of emails and contact information taken from servers belonging to the Bivings Group, Monsanto’s public relations firm.

Anonymous targeted the company for its decision to file lawsuits against organic dairy farmers because the farmers labeled their products as free of growth hormones, a product Monsanto used to manufacture.

The attack was announced by the Twitter account YourAnonNews, “HACKED: Monsanto pwnt once more by #Anonymous - Old DB lifted and leaked.” The tweet also linked to the database that was published on pastehtml.com, which contained a statement as to the reason for the hack.

“Your continued attack on the worlds food supply, as well as the health of those who eat it, has earned you our full attention. Your crimes against humanity are too many to name on one page, you have put over 9000 small-time farmers out of business by using your enourmous legal team to bury them with your malicious patent lawsuits. You have continually introduced harmful, even deadly products into our food supply without warning, without care, all for your own profit,” read the statement.

This attack is the third in an ongoing campaign against Monsanto that has included a July 2011 hack where personal information belonging to 2,500 employees was posted. In December 2011, Anonymous again targeted the Bivings Group, taking down their website.