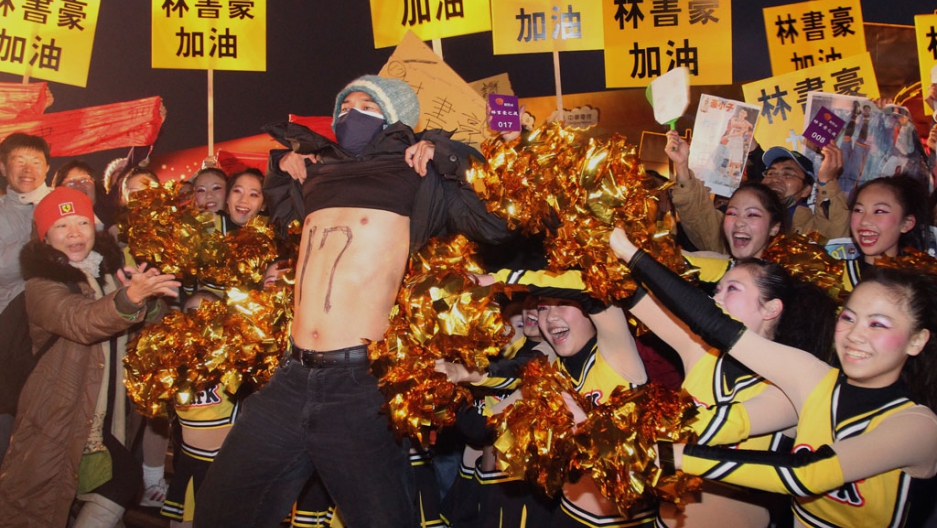 Jeremy Lin, a 23-year-old Taiwanese American, went from NBA unknown to starting point guard for the New York Knicks in a matter of days. His performance shocked coaches and fans alike. People in Taiwan wanted to know more about the California-born Harvard grad whose roots traced back to their homeland.

The media paid attention. They started calling Lin's family members and asking them questions. But it didn't stop there, and many local commentators say "Linsanity" has gotten embarrassingly out of hand at a time when Taiwan needs to put its best foot forward on the international stage.

Reporters have been pestering Lin's family to such a degree that his 85-year-old grandmother was effectively forced out of Taipei. She fled to their family's rural home in central Taiwan — where she continues to be pestered by reporters.

In a post-game press conference last week, Lin pleaded for his family to be left alone.

“The special request I have is for the media back in Taiwan to give [my family] space, because they can’t even go to work without being bombarded, without people following them,” Lin said at Madison Square Garden, after pouring in 28 points, 14 assists and 5 steals in a rout of defending champions the Dallas Mavericks.

It didn’t do any good. Many of Lin's relatives have reportedly gone underground, ostensibly putting their lives on hold as they wait for the bright lights to dim a little.

Lin's 63-year-old uncle Lin Chi-chung, hasn't been able to leave his Taipei home for fear he will take the media crush with him.

Whenever he does venture outside, and into the throng of camped out reporters, the questions often carry an overtly Taiwanese theme: "What's his favorite Taiwanese snack food?" "Does he like Taiwanese girls?" "Will he buy an apartment in Taipei?" Which Taiwanese political party does he support?" "Will he study Mandarin?" "How important are his Taiwanese roots to him?"

Answers to those questions spawn "news pieces" of their own, which are then spliced with older coverage and played on a continuous loop.

“I knew this would happen. I knew they would take a great story and just bludgeon it to death. Now it’s all about money, ratings and sound bites. No matter how asinine they are,” said media analyst Chang Guo-hou.

“One of the major news channels played Lin-related content for seven hours straight yesterday, while others are averaging about 60 percent of content devoted to him. It’s like the world has stopped.“

Chang says Taiwanese reporters, who have reputations for being aggressive, aren’t likely to back off anytime soon.

“Taiwan is so desperate for a hero. They have this chip on their shoulder that the world ignores them, so they take even tenuous connections to a positive global story, and milk it for all it’s worth.”

The blanket coverage has relegated leading stories, such as the first visit to Taiwan by a Beijing mayor since their civil war split in 1949, political reforms and a contentious decision to press on with a fourth nuclear plant, to news cycle afterthoughts.

“The abuse of freedom of speech and the public interest by media is one of the glaring deficiencies in our democracy. Not only is their coverage often sensationalist, but the way they treat and report stories lacks any sense of humanity,” said George Tsai, vice president of the Taiwan Foundation for Democracy.

“This is another wake-up call. We should be thinking about reining them in.”

But it’s not just the tabloid journalists who are cashing in on the Lin bonanza. A host of illegal businesses, from counterfeiting to gambling to drugs and prostitution are also surging as punters stay up to watch the Knicks play.

“Linsanity has driven betting on the NBA by at least 2,000 percent,” said "Wu," a bookie with ties to Taipei’s underworld, who asked to be identified by a single name. “It’s not just gambling either. I have friends who work in drugs and girls that tell me every day is like the monthly pay day or a national holiday. ”

Lin’s likeness is also being used by legitimate companies without his permission, usually with thinly veiled references to his Knicks’ No. 17 jersey or “The Pride of Taiwan” moniker bestowed upon him by Taiwanese media.

An Adidas store in central Taipei sold out of 1,000 Linsanity T-shirts in a few short hours on Mondau, after fans had queued in the cold to get one. The store had set a one-shirt-per-person limit.

Taiwanese tourists returning home from the US are stuffing their suitcases full of Lin merchandise, and Chinese factories are churning out Lin’s Adidas NBA jersey.

And still it’s not enough.

“You can’t even get the real thing here. They’re all sold out,” said Chang, unfazed that Lin T-shirts are three times the price of the other shirts on display. “I wanted to show my support for him and thank him for reigniting my interest in basketball. I’ve played every day since he started his run in New York.”