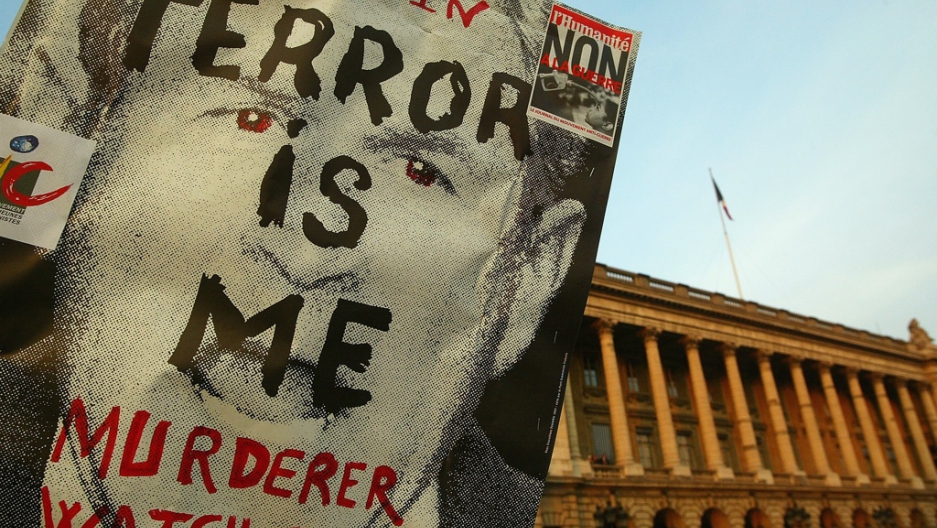 The French haven't always been so keen on Americans.
Share

According to the French far-left, “the United States of America are the world’s biggest problem.”

This assertion earned Jean-Luc Melenchon, figurehead of the Front de Gauche, the applause of more than 2,000 supporters assembled in the southwestern city of Talence in December.

If lambasting France is a common trick in the US Republican primaries, a similar tactic has emerged in France.

The French too are choosing a president this year — elections are April 22 and May 6 — and although anti-Americanism isn’t as popular as it used to be, close to one in three voters is rooting for a candidate who openly questions Paris’ alliance with Washington either on the left, in Melenchon, or the right, in Front National candidate Marine Le Pen.

These candidates have a slim chance of winning. But their campaigns are playing on — and playing up — anti-American sentiment that has long lurked just below the surface of French politics.

The French don’t loathe Americans. But the love-hate relationship many French people have for American power, culture and influence can evoke strong sentiment that is rife for politicians in need of a boost at the polls.

Melenchon, who is polling at about 9 percent, is the most virulent in his attacks. An admirer of Hugo Chavez, he has taken to calling the United States “the empire” and its European allies “vassals.”

The American model for the economy, based on limitless consumption and military spending, is a “deadly contraption” that remains the “main cause of the crisis of human civilization,” he writes in his best-selling essay “Qu'ils s'en aillent tous.” (Translation: Let's kick them all out.)

If elected — a very remote possibility — he would pull France out of NATO and strengthen ties with China and Russia.

Criticism of America's dominance on the world economy finds an echo in French public opinion, wrangled by the debt crisis and the perspective of austerity measures after the election.

“We've always followed the United States, a few years behind, but for me it is the worst kind of model,” said Francine Pietka, a participant in the “Indignes” movement, France's version of Occupy Wall Street, who was at a rally protesting austerity measures in Greece.

“They represent the worst of many areas: their politics, their lack of a social safety net, their meddling in many countries, their expansionism.”

And when anger isn't directed at Washington, it is directed at Brussels, which critics see as a Trojan horse for American economic policies. “The European Union is a branch office of the United States,” said Annik Bolard, an activist with the French Communist Party, which has rallied behind Melenchon. “And since we don't like the European Union ...”

On the opposite end of the political spectrum, Le Pen and her far-right Front National show up in polls at close to 20 percent of the vote.

A nationalist, she fears the influence of American culture and the ascent of a “homo economicus,” a “compulsive consumer overfed on Coca-Cola and McDonald's ... who forgets his own history and tradition to the benefit of multinationals.”

Her platform also includes leaving NATO's integrated military command. “The economic crisis gives us the opportunity to turn our back on the United States and turn to Russia,” Le Pen told the Russian daily Kommersant on a trip to Moscow last October. Two weeks later, however, she was visiting Washington with a friendlier discourse.

In addition to the economic and political criticism, sympathizers of the Front National — an anti-immigration, some say xenophobic, party — have another qualm about America: its famed “melting pot.”

“The United States are seen as what threatens France and Europe if we don't adopt a strict immigration policy,” said Magali Balent, a researcher at the Robert Schuman Foundation who just published a book on the Front National's foreign policy, “Le Monde selon Marine” or "the World according to Marine." “And since they've elected a black president, it's even more of a problem.”

French anti-Americanism is as old as America itself. The 18th-century natural scientist Georges-Louis Buffon wrote of a degenerate continent — without visiting it — where animals don't grow as big and maybe dogs can’t bark, notes Philippe Roger in his book, "The American Enemy: The History of French Anti-Americanism." Great minds from Charles Baudelaire to Jean-Paul Sartre all found reasons to lambaste the “Yankees.”

"Anti-Americanism came from intellectuals, born out of cultural scorn that became cultural jealousy," Roger said. It is a deep-seated national prejudice, he adds, the result of generations of French people repeating the same unfounded assumptions — that Americans are illiterate brutes with money as their sole motivator.

US popularity in France nosedived with the Iraq war: in the French mind, if America was the Empire, President George W. Bush was its Darth Vader.

In 2007, France elected a man who'd been dubbed "Sarkozy l'Americain.” Opponents meant the nickname as a slur — a Socialist Party campaign report called him an "American neocon with a French passport" — but Nicolas Sarkozy took it as a point of pride. "I've come to tell you that one can be a friend to America and win elections in France," he jokingly told the US Congress shortly after he became president.

But most French are wild about President Barack Obama. French approval of the US rose more than 30 points from his election alone, even though America’s wars were not ended. Today, according to the Pew Research Center's Global Attitudes Project, 75 percent of the French have a favorable opinion of the United States. In other words, France is America's best friend in Europe.

These days, admitting to anti-American sentiment has become less popular. “Nowadays, people are aware that being anti-American is playing into more than a century of cliches,” Roger said.

So at another protest rally on Greece, Front de Gauche supporter Dany Queron insisted: "It's not anti-Americanism, we're against the ultraliberal policies the US is carrying out. Everyone is making that distinction."

But the cliches and the resentment haven't gone anywhere. "If tomorrow there was a President Santorum, and all the policies that go along with that," Philippe Roger said, "the fire of French anti-Americanism would burn anew."