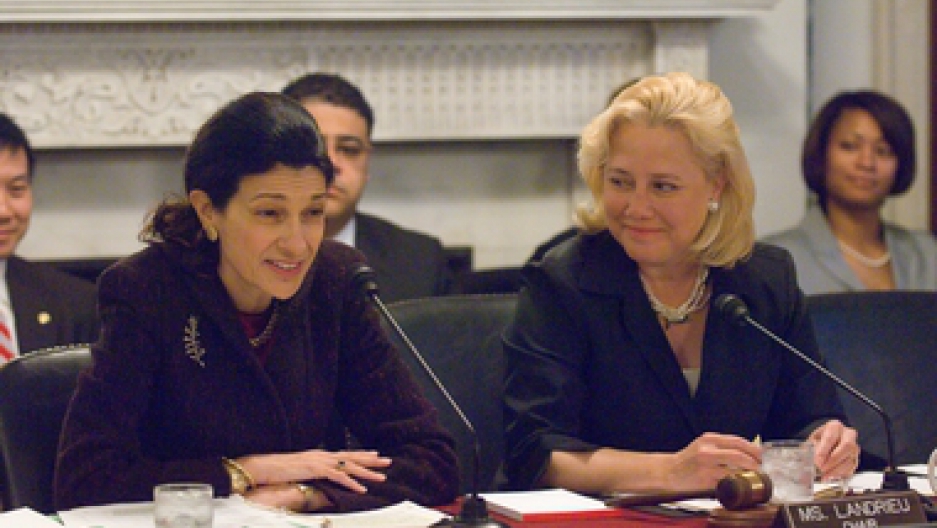 Sen. Olympia Snowe (R-Maine) and Chairwoman Mary Landrieu (D-La.) address the Small Business Committee in this photo from 2010. Snow announced her retirement on Tuesday. (Photo courtesy of the Office of Senator Olympia Snowe.)

Republican efforts to regain control of the U.S. Senate in November became considerably trickier on Tuesday when Maine Sen. Olympia Snowe, a moderate Republican, announced she would no longer seek re-election.

Snowe cited the Senate's "atmosphere of polarization" — in other words, its partisanship — as one of the reasons she decided not to run. Her departure is yet another sign that moderates are less influential in Washington, D.C.

Snow has served in Congress for 34 years and is just completing her third term in the U.S. Senate. She was the first woman in American history to serve in both houses of a state legislature and both houses of the U.S. Congress.

She remains very popular in Maine and was expected to fairly easily win re-election. But now, the Republicans will have to fight just to keep that seat.

Todd Zwillich, Takeaway Washington correspondent, said this is a major blow to Republicans.

"Democrats are ecstatic, because this basically reduces, if not eliminates, Republicans chances of taking over the Senate in 2012," Zwillich said. "Sure they liked Olympia Snowe. There were times they could reach out to her, but the times of broad, sweeping bi-partisan bills...those days are gone and have been gone for a while."

Zwillich said a Democratic victory in Maine will likely end the Republican dream of taking over the Senate — and that's what is Democrat's top priority. That's even despite the fact that Snowe has worked with Democrats on some occasions to help them get their top legislative priorities approved.

"Republicans are devastated by this news, surprised by this news. Mitch McConnell did not know about this until about an hour to a couple of hours before it was announced," Zwillich said.

Ron Christie, Republican political strategist, said this is a blow to politics — and something that saddens him personally.

"Olympia Snow was a consensus builder. She was able to reach across not only to the Democrats but also to some of the more conservative members of the Republican side and forge consensus," Christie said.

There's no longer many moderate Republicans left in the House or Senate, Christie said.

"I think that's to our detriment," he said. "I think it's good to have a bigger tent."

Both parties, he said, are just playing to their bases and it does the country no good service.

"Part of the depression among a lot of senators right now, if you talk to them, is it doesn't show any signs of getting any better after this next election, or any time soon," Zwillich said.