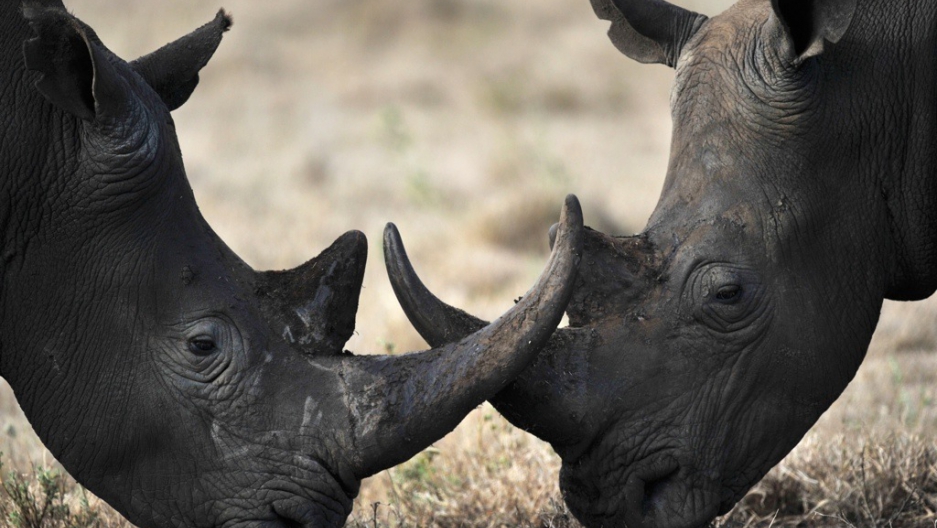 Two rhinos playfully lock horns. Some wildlife experts say that controlled hunting is the best way to save the endangered rhino from being poached to extinction.
Credit: Roberto Schmidt
Share

JOHANNESBURG, South Africa — Killing rhinos to save them doesn’t seem like an obvious solution to the poaching problem.

And for the foreign hunters, mainly American, who pay tens of thousands of dollars to come to South Africa and shoot a white rhino — think wealthy white men in khaki living out their Hemingway fantasies — protecting the species is probably not their main motivation.

But the irony is that some lobbyists believe legal hunting of rhinos is an essential component in saving the animals from poachers that are killing them at a frightening rate.

Even some conservation groups have spoken out against a proposed moratorium on rhino hunting, which is currently allowed in South Africa in limited numbers, instead calling for stricter controls to ensure that only genuine hunters are being given permits, and that quotas are followed.

The equation is simple: “What pays, stays,” said Pelham Jones, a spokesman with the South Africa Private Rhino Owners Association.

“What is able to produce long-term economic yield will be protected and preserved,” he explained.

A similar argument has been previously made with other endangered African animals, including lions.

The idea is that hunting helps to protect animals because it brings in revenue and provides a financial reason to keep high-cost wild game. This is particularly the case with rare animals, such as the sable antelope, which hunters will pay big bucks to kill. The demand has helped boost population numbers.

“We have no problem with this,” he said. “Unlike with humans, there are no retirement villages for animals.”

But poachers, he said, often target rhinos cows with a young calf, because they make for an easier target — the mother won’t run away from its young.

“When you take a young, breeding animal and allow that animal to be shot to satisfy obscure medical demands, we are 1,000 times against that,” Jones said.

When the conservation authority for South Africa's Kwa-Zulu Natal province announced in January that one of its wildlife parks had auctioned off the right to hunt a white rhino, many in South Africa were upset that this would happen following the worst year for rhino poaching on record. People were shocked that hunting would be permitted in a state game park.

A local businessman had paid $125,000 to hunt a male white rhinoceros at Mkuze Game Reserve, Ezemvelo, the wildlife authority for KwaZulu-Natal province. Ezemvelo had asked people to bid online to kill the animal, and said the animal was "surplus," as the reserve had reached capacity.

The money raised through hunting auctions goes towards conservation efforts at the parks.

Simon Bloch of the group Outraged South African Citizens Against Poaching called for the unnamed businessman "to identify himself, exchange his high-powered rifle for a camera, take the shot and walk away,” the Independent Online reported.

Kirsty Brebner, rhino program manager with Endangered Wildlife Trust — one of the groups behind a position paper on a hunting moratorium — said that any hunting must be ethical, legal, and must contribute to conservation.

“None of us like hunting,” she said. “Unfortunately, the harsh reality is that conservation no longer sits in a bubble.”

Brebner noted that because rhino cows are often the target of poachers, and their calves usually die from the shock and trauma, poachers are “killing two for one horn.”

“Calves are the unwitting victims of all this,” she said.

Some activists are even pushing for the legalized trade of rhino horns, under a setup similar to the occasional legal sales of elephant ivory. This, they say, could help save the animals at a time when private game reserves are reluctant to keep rhinos because they are expensive and a massive poaching liability, they argue.

But some rhino owners won’t support hunting or a controlled rhino horn trade until they know exactly how many rhinos are left in South Africa.

While conservationists estimate 21,000 rhinos, including 18,500 white rhinos and 2,500 black rhinos, many people doubt the figures and have called for a rhino census — a difficult task, since many rhino owners will no longer reveal how many animals they have for fear of being targeted by poachers.

Lorinda Hern, whose family owns the Rhino and Lion Nature Reserve near Johannesburg, said that a “proper, independent census” must be done before she will even consider whether legalizing trade in horns is feasible.

Some wildlife advocates say that trophy hunting is a major threat to African lions — for one thing that it disrupts prides and can spark deadly battles for dominance. But hunters’ groups argue that the revenue from hunting helps to save the animals.

By creating a value for lions, it protects them, providing economic benefits to African communities and leading to fewer human-lion conflicts, groups such as Safari Club International have argued.

As for legalizing sales of rhino horns — banned for more than three decades — opponents point to the occasional sales of elephant ivory as a model, despite the fact that conservationists say it has failed.

The international CITES ban on trade in ivory came into effect in 1989, amid an elephant poaching epidemic, and limited sales of ivory stockpiles have since been allowed.

Pelham Jones said the ban on trade in rhino horns has only led to more poaching.

Jones compared the restrictions on rhino horns to prohibition in the United States, which created a massive black market for alcohol: “How much longer is it going to take for them to wake up and realize this is not working?”